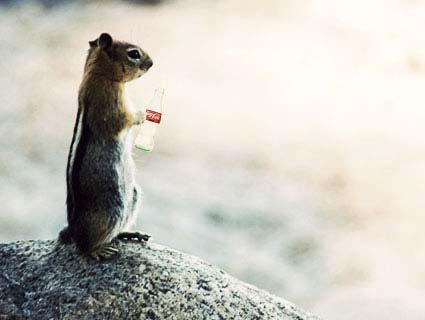 I love national parks—from the regal slopes of Yellowstone to the mind-bending vastness of the Grand Canyon. Like everyone else, I go to parks to get away from the bells and whistles of everyday life. So I can completely understand why a lot of people are creeped out by the mere prospect of private companies playing a role in the National Park Service.

And yet, our parks are strapped for cash. A few bucks from a big business could go a long way toward better trails, nicer facilities, and more ranger programs. So should companies fund the parks, or are these natural spaces best left free of corporate interference? The question has been debated over the years, with flare-ups around the time the Bush administration attempted to privatize parts of the park service back in 2003 and last fall when there was concern that Coca-Cola had interfered in a plan to stop selling disposable plastic water bottles in the parks.

The bottled water affair began in 2010 when officials at Grand Canyon National Park announced that vendors would be prohibted from selling water in the park; instead, there would be refilling stations for reusable bottles. The move, they explained, would cut waste in the park significantly. But Coca-Cola complained about the move to the National Park Foundation (the nonprofit that channels support from companies and donors to parks). In short order, the head of the Park Service intervened to block the ban. Since Coca-Cola has donated $4 million to the foundation for things like trail maintenance and tourism promotions, some people suspected that the company may have asserted undue influence over the bottle issue.

David Barna, chief spokesman for the National Park Service, insists that wasn’t so—NPS simply needed more time to consider the impact of the ban. The agency announced just a few weeks ago that it is going forward with the bottle ban in the Grand Canyon after all.

But that hasn’t stopped some from worrying about creeping corporatization in our parks. Most recently, the watchdog group Public Employees for Environmental Responsibility (PEER) called attention to plans to fundraise for an endowment for the Park Service’s centennial anniversary from corporate and philanthropic partners. “Our national parks do not need a super PAC to flourish in the 21st century,” said Jeff Ruch, the group’s executive director. Ruch says it’s “not so much the corporate money, it’s the corporate influence” that he’s worried about. His group noted that agreement Coca-Cola had with the Park Foundation offered “special visitation opportunities, e.g., for executives and key customer hospitality, in the Parks,” “marketing support,” and “promotional media.”

But Rich Weideman, the assistant director for partnerships and civic engagement with the NPS, has a different take: “In order to add depth and quality to a program, fundraising is the way to do that,”  Weideman says. Through the foundation, companies can make donations for specific events or parks, or contribute to a general fund used at the discretion of the Park Service.

In the grand scheme of things, the amount of money from those partners is pretty low: According to NPS spokesman Barna, about 90 percent of the $3 billion budget for the NPS comes from congressional appropriations. The other 10 percent comes from revenue streams: $150 million to $200 million from entrance fees each year, around $20 million for fees on concession providers in the parks, and about $30 million in donations from corporate partners and other donors.

And these partnerships are not a new development. The National Park Foundation lists a variety of corporate partners, including Bank of America, Benadryl, J. Crew, and Macy’s. Weideman says the service insists on strict standards for what corporate partners are allowed to do, to ensure that there won’t be a giant “Brought to you by Coke” sign draped over Mt. Rushmore or the Statue of Liberty anytime soon.

Weideman pointed to Nickelodeon’s “Worldwide Day of Play” last September, which held its big event on the Ellipse, the area between the White House and the National Mall in Washington, DC. NPS was a cosponsor of the event, which aimed to get kids outside and away from the boob tube for a few hours. The guidelines for the event ensured that any displays from the sponsors were “nonintrusive”—so there wasn’t a big “Nick” slogan blocking the view of the White House, for example.

All the rules governing these partnerships are spelled out in Director’s Order #21, a 1998 guidance document on how to deal with corporate partners. The rule bars donations from companies that are currently bidding for a concessions contract in a park, or any other significant conflict of interest. And it makes clear that the NPS won’t take money from alcohol or tobacco companies, Weideman said.

Barna balked at the idea that a company could buy influence with a relatively small donation. “Certainly Coke is a contributor to the National Park Foundation,” he says. “But [National Park Service director Jonathan Jarvis] is managing a $3 billion agency here. That kind of money doesn’t have that level of influence in this town.”

PEER says it isn’t out to end all corporate donations for parks—it just wants assurance that there aren’t any strings attached, and that the donors aren’t granted special privileges in parks that other Americans don’t get. PEER is advocating for greater transparency from the National Park Foundation, including the public disclosure of any agreements reached with a corporate partner.

My two cents: If corporate bucks can help ensure that the Badlands rangers have a little extra cash for improving their trails—without having to plaster a giant sponsorship logo over the pristine landscape—then I’m all for it.