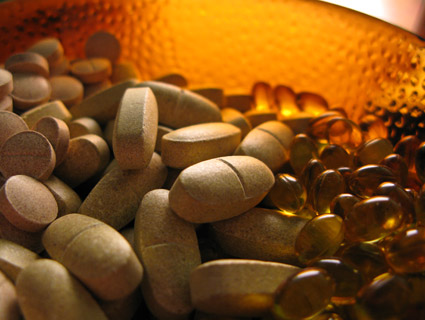 I didn’t start taking vitamins until a few years ago, after Target began selling adult multivitamins in the form of gummy bears. I’ve been dutifully popping two bears a day ever since, getting my daily candy fix while ostensibly improving my health. After all, to hear the $28 billion supplement industry tell it, the gummies could be all that stands between me and scurvy. “Some people, like if you’re eating kale for breakfast or something, get all their nutrients from food,” says Duffy MacKay, vice president of scientific and regulatory affairs for the Council for Responsible Nutrition (CRN), the industry’s leading trade group. “But in this complex world, that’s getting increasingly rare.”

According to a survey by the National Institutes of Health, nearly a third of Americans take multivitamins regularly. The Vitamin Shoppe, a chain with more than $700 million in annual sales, has been growing by double digits year after year. Yet mounting data suggests that multivitamins aren’t the nutritional wonders the industry would have us believe. “There is virtually no evidence that they make healthy people healthier,” says author Marion Nestle, one of several nutritionists who told me that vitamin deficiency is quite rare in the United States. (Her latest book, Why Calories Count, is due out in April.)

Despite manufacturers’ coded claims that multivitamins ward off chronic illness—D “promotes breast health,” B is “heart healthy“—a large 2009 study of postmenopausal women published in Archives of Internal Medicine found that multis didn’t protect against any of the diseases studied, including heart disease and lung, breast, and colon cancer. A 2011 study involving nearly 39,000 women reached similar conclusions.

What’s more, if you’re the kind of person who takes a multi you may literally be pissing away your hard-earned dollars. According to another oft-cited study, typical vitamin users are more likely than nonusers to get their quota from food alone. And with so many fortified products crowding supermarket shelves, it’s not hard to exceed recommended daily limits for certain vitamins and minerals. In some cases, that can be dangerous. Several studies link excessive folic acid intake—the amount you might get from popping a multi and eating two bowls of Total—with lesions that can lead to colorectal cancers. For seniors, who usually get all the iron they need from fortified rice, cereals, and sliced breads, a multi with iron can increase the risk of heart disease. And pregnant women who pop standard multis containing the retinol form of vitamin A may boost the likelihood of birth defects. (Prenatal vitamins are formulated to be very low in retinol.)

Thanks to the unceasing pressure of politicians like Sen. Orrin Hatch (R-Utah), the Food and Drug Administration doesn’t regulate the labeling of supplements. Last June, Sen. Dick Durbin, an Illinois Democrat, introduced a bill that would force manufacturers to slap a warning on supplements that could cause health risks. Naturally, the industry opposes it. “We believe in the safety of our products across the board,” Mike Greene, CRN’s vice president of government relations, assured me.

Want more Econundrum fun? Like us on Facebook for quick answers to green questions and other enviro tidbits.

But not all companies police their own labels well. In a recent analysis of 60 common multivitamins, ConsumerLab.com found fault with about a third of the label claims: For instance, one gummy for kids exceeded the upper daily limits of vitamin A and zinc, and one adult multi had double the recommended dose of vitamin A.

While federal health officials recommend multis for picky-eater kids and anorexics, and specific supplements for certain categories of people (see chart), most of the nutritionists I talked to encourage their healthy patients to stop fretting about vitamins. Our diets may be chock full of sugar, sodium, and fat—but when’s the last time you met someone with rickets? Most people, Nestle says, “will have adequate nutrient intake from whatever they are eating,” even if they don’t chomp kale for breakfast.

Given all of this, I’ve decided to give up my daily vitamin regimen—and spend the money I save on good old unfortified gummy bears.

Only some otherwise healthy folks require supplements. A few examples.
By Azeen Ghorayshi