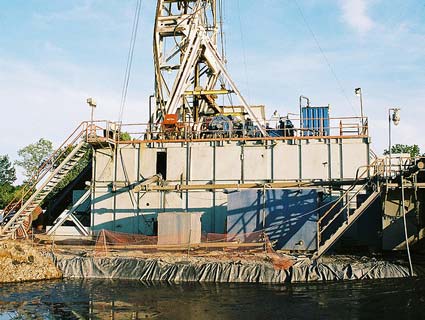 Under a new law, doctors in Pennsylvania can access information about chemicals used in natural gas extraction—but they won’t be able to share it with their patients.* A provision buried in a law passed last month is drawing scrutiny from the public health and environmental community, who argue that it will “gag” doctors who want to raise concerns related to oil and gas extraction with the people they treat and the general public.

Pennsylvania is at the forefront in the debate over “fracking,” the process by which a high-pressure mixture of chemicals, sand, and water are blasted into rock to tap into the gas. Recent discoveries of great reserves in the Marcellus Shale region of the state prompted a rush to development, as have advancements in fracking technologies. But with those changes have come a number of concerns from citizens about potential environmental and health impacts from natural gas drilling.

There is good reason to be curious about exactly what’s in those fluids. A 2010 congressional investigation revealed that Halliburton and other fracking companies had used 32 million gallons of diesel products, which include toxic chemicals like benzene, toluene, ethylbenzene, and xylene, in the fluids they inject into the ground. Low levels of exposure to those chemicals can trigger acute effects like headaches, dizziness, and drowsiness, while higher levels of exposure can cause cancer.

Pennsylvania law states that companies must disclose the identity and amount of any chemicals used in fracking fluids to any health professional that requests that information in order to diagnosis or treat a patient that may have been exposed to a hazardous chemical. But the provision in the new bill requires those health professionals to sign a confidentiality agreement stating that they will not disclose that information to anyone else—not even the person they’re trying to treat.

“The whole goal of medical community is to protect public health,” said David Masur, director of PennEnvironment. He worries that the threat of a lawsuit from a big industry player like Halliburton or ExxonMobil for violating a confidentiality agreement could scare doctors away from research on potential impacts in the state. “If anything, we need more concrete information. This just stifles another way the public could have access to information from experts.”

The provision was not in the initial versions of the law debated in the state Senate or House in February; it was added in during conference between the two chambers, said State Senator Daylin Leach (D), which meant that many lawmakers did not even notice that this “broad, very troubling provision” had been added. “The importance of keeping it as proprietary secret seems minimal when compared to letting the public know what chemicals they and their children are being exposed to,” Leach told Mother Jones.

The limits on what doctors can say about those chemicals makes it impossible to either assuage or affirm the public’s concerns about health impacts. “People are claiming that animals are dying and people are getting sick in clusters around [drilling wells], but we can’t really study it because we can’t see what’s actually in the product,” said Leach.

At the federal level, natural gas developers have long been allowed to keep the mixture of chemicals they use in fracking fluid a secret from the general public, protecting it as “proprietary information.” The industry is exempt from the Environmental Protection Agency’s Toxics Release Inventory—the program that ensures that communities are given information about what companies are releasing. In 2005 the industry successfully lobbied for an exemption from EPA regulation under the Safe Drinking Water Act as well, in what is often referred to as the “Halliburton Loophole.” The Obama EPA has pressed drillers to voluntarily provide more information about fracking fluids, but the industry has largely rebuffed those appeals.

The latest move in Pennsylvania has raised suspicions among the industry’s critics once again. As Walter Tsou, president of the Philadelphia chapter of Physicians for Social Responsibility, put it, “What is the big secret here that they’re unwilling to tell people, unless they know that if people found out what’s really in these chemicals, they would be outraged?”

However, the actual terms of the confidentiality agreements have not yet been drafted, and there seems to be pretty wide confusion in the state about what exactly the bill as signed into law would mean.