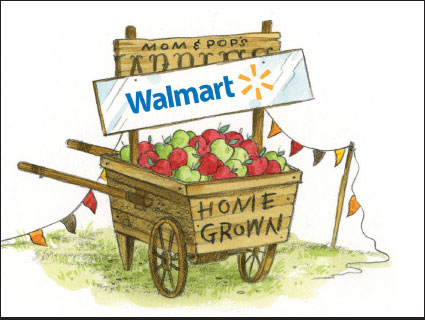 I live on an organic farm in North Carolina, so I don’t spend much time roaming my local Walmart looking for produce. But on a recent trip to Austin, Texas, I decided to stop by a busy supercenter to see how the company was going about its well-publicized push to sell more local and organic food.

The produce section sat between the in-store McDonald’s and some giant coolers packed with Hormel bologna. There were crates piled high with perfect orbs of cabbage and tomatoes, onions and melons. Elephant-ear-size collard greens sat in tight bunches; stacks of fist-size lemons beamed yellow. Plenty of fresh food, to be sure, though a few “Grown in USA” signs were the nearest thing I could find to an indication of local. Organic? A few bags of house-brand lettuce claimed that standard.

But you can’t judge Walmart on a single store. The company sells 18 percent of all the groceries bought in the United States—more than anyone else by a wide margin. And it’s not just Froot Loops and rock-hard tomatoes. Over the last decade, Walmart has emerged as a massive player in the organic-food market. By 2006, the year it made a splashy announcement about doubling its sales of organic food, it was already the nation’s No. 1 seller of organic milk. By 2007, according to the market data firm Scarborough Research, shoppers in search of organic food chose Walmart more often than any other grocery store.

In 2008, a company press release proclaimed that “Walmart Commits to America’s Farmers as Produce Aisles Go Local,” and here, too, it seemed to have plenty to brag about. Walmart said it was on track to buy $400 million annually in “locally grown produce.” The company refused to divulge how much it spent on produce overall, but it promised that 9 percent of its US fruits and veggies would be local by the end of 2015.

Naturally, the press releases didn’t mention that the retailer’s motivation had as much to do with doing good as with spending less. “In produce, a disproportionate cost is in the cost to ship it 1,500 miles across the country,” Walmart spokeswoman Brooke Buchanan noted in an email to me. There’s also the food that goes to waste in up to seven days of transit. As diesel prices began to rise in the early 2000s, the company began seeking out growers closer to its stores. If that could be spun into a community initiative—especially in rural locations still hurting from Walmart’s devastation of Main Street—all the better.

In 2010, Walmart pledged to support “farmers and their communities” by selling $1 billion worth of produce from small and medium farms worldwide by the end of 2015. But longtime produce industry analyst Jim Prevor, who edits the blog Perishable Pundit, told me that a substantial portion of this amounts to Walmart trying to “get credit for doing what it’s already doing.” Case in point: Walmart defines as local any produce that’s sold in the same state as it’s produced. “There’s a joke in the industry that if Walmart wants to increase local sales, all it has to do is open more stores in California,” Prevor said.

According to one grocery industry expert, Walmart’s organic push has mostly focused on nonproduce items like milk and baby food.

True, he said, the company is buying from a broader spectrum of growers nationwide. But they tend to be large-scale farmers who can match the prices of the California giants.

I asked Walmart’s Buchanan for examples of farmers from whom it buys local produce. The three she gave me—in North Carolina, Washington, and Arkansas—all run substantial operations, and none is organic. In fact, according to Prevor, Walmart’s organic push has mostly focused on nonproduce items like milk and baby food. Prevor told me that its buyers had tried aggressively to bring in much more organic produce, but “they just couldn’t find operations with sufficient quantity to supply them.” A company of Walmart’s size simply can’t devote resources to “chasing down small organic apple wholesalers and buying 60 cases of apples because that’s all they have.” Walmart doesn’t say how much of the produce it sells is organic, but “I’d be surprised if it’s more than 2 percent of the total produce,” Prevor said.

Of course, Walmart exists to generate profit, not social change. And that may explain the dearth of produce being trumpeted as local and organic in the Austin store I visited. The city teems with farmers markets, Whole Foods branches, and a successful food co-op. With so many options available, shoppers here are likely not heading to Walmart for their heirloom tomatoes. As Prevor told me, the company tailors its offerings to each region. It will “essentially sell whatever its customers want, as long as there’s a profit to be made.”