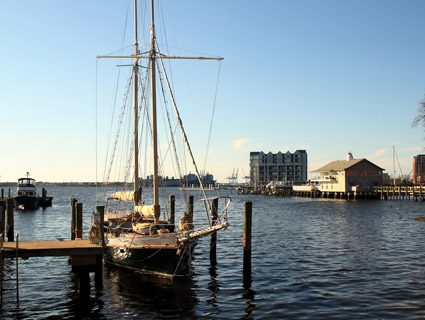 This story was produced by PBS Need to Know as part of the Climate Desk collaboration.

When the presidential candidates talk about the long-term economic security of the US, they often talk about the national debt, the viability of Medicare and Social Security, and the rise of China.

But there’s another issue that could have major implications for the nation’s economy, and it’s barely mentioned at all: the soaring costs America might face in generations to come from climate change. More specifically, the very damaging and very costly effects of sea level rise.

According to recent research put out by Climate Central, close to four million Americans now live in coastal communities that could see increased flooding caused by sea-level rise. The kind of flooding that was once considered extremely rare could happen more and more often, with devastating economic consequences.

The city of Norfolk, Va., is getting an early look at what sea-level rise means for a big coastal community. The city is experiencing sea-level rise earlier than most because not only are the seas around the city going up, but much of the land beneath Norfolk is going down. This one-two punch means the city is seeing today the kind of flooding that many cities could experience down the road if the scientific projections of sea-level rise play out.

We went to Norfolk recently and talked with Mayor Paul Fraim about how he’s grappling with the flooding that’s occurring more and more often in his city. In what may be a first for an American mayor, Fraim tells Need to Know that if sea-level rise continues, some parts of his city may have to be abandoned to the rising tide. Here’s our report:

A bit of additional background: sea-levels globally have gone up about 5-8 inches over the last century — a side-effect, most scientists say, of our heavy use of fossil-fuels like coal, oil and gas. Burning those fuels warms the planet, and warmer ocean water expands, causing the seas and oceans to rise. The Federal government projects that sea-levels will rise an additional foot or two in coming decades. If the planet continues to warm, the world’s ice sheets could continue to melt, releasing more of their water into the seas, which could drive sea levels up much further.

Some climate change skeptics argue that the models used to predict future rise are problematic and can’t be trusted. They argue that it’s foolish for cities and towns across the country to spend millions of dollars preparing for something that may never arrive.

There’s one area in the discussion of sea-level rise where there’s a growing consensus: a growing number of critics sat that the U.S. needs to rethink the policies – like subsidized Federal flood insurance – that they say encourage people to build in areas that will keep flooding over and over again. (The private insurance industry got out of writing flood policies in risky areas many years ago, and now the Federal government is currently the biggest backstop for losses in flood-prone areas.)

Environmental groups and coastal scientists have argued for years that the continued development along the U.S. coast is made easier by this subsidized insurance, and that this policy needs to be overhauled. According to The New York Times, now even some prominent climate change skeptics, like Myron Ebell of the Competitive Enterprise Institute, have joined that chorus. Ebell told the Times, “If people want to build an expensive beach house on the Florida or Carolina coast, they should take their own risk and pay for their own insurance.”

A new, bipartisan coalition of groups has formed around this issue as well – it’s called Smarter-Safer, and they’re urging Congress to reform the Federal flood insurance program.