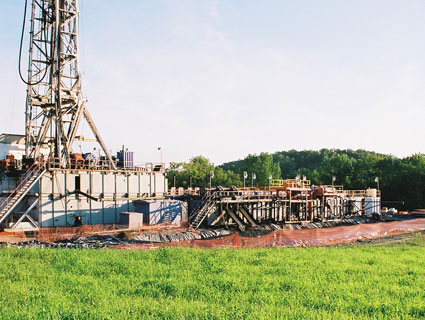 Last week’s media coverage of the Obama administration’s newly-proposed fracking rules focused so heavily on how drilling companies would have to disclose the chemicals they use that it largely overlooked the toughest provisions: Drillers would be required to test the physical integrity of their wells, and more water would be protected from drilling. Since many wells fail because the cement and casings crack, the new tests could prevent dangerous leakages.

One major limitation: Although widely understood as “national” guidelines, the draft rules would in fact only apply to a sliver of the nation’s natural gas supply. That’s because they would apply to mineral rights managed by the Bureau of Land Management, which means areas beneath most BLM and tribal land, but scarcely any U.S. Forest Service, private or state-owned lands—where most drilling occurs. Industry has criticized the proposed rules as too restrictive.

The draft rules would require companies to conduct “mechanical integrity tests.” These include pressure tests to make sure that the well can withstand the highly pressurized fluid used for fracking. Ensuring that wells are properly sealed is considered critical for preventing water and ground contamination.

The proposed rules also expand the scope of water protected from drilling to include not just fresh water but all “usable water”—meaning lower quality water used for agriculture and construction, as well as water that can be treated to make potable. Currently, only water with up to 5,000 parts per million of total dissolved solids is protected by the BLM. The new rules would expand that definition to include water with up to 10,000 parts per million, which matches the EPA’s definition for an underground source of drinking water.

“The proposed rule will modernize our management of well stimulation activities—including hydraulic fracturing—to make sure that fracturing operations conducted on public and Indian lands follow common-sense industry best practices,” Secretary of the Interior Ken Salazar said in a statement.

The lands covered by the proposed rules are the source of “11 percent of the Nation’s natural gas supply and five percent of its oil,” according to the BLM. About 3,400 wells are drilled on these lands each year, according to the bureau, and 90 percent of those wells use hydraulic fracturing, a technique to extract natural gas by injecting into the earth highly pressurized fluids laden with chemicals, sometimes including potentially toxic ones such as benzene and lead.

Environmental activists wonder how likely the rules are to be enforced. In New Mexico, for example, the BLM oversees more than 30,000 active wells—with only 69 inspectors. “However strong the rules are, enforcement is only as good as staff on the ground,” said attorney Erik Schlenker-Goodrich of the Western Environmental Law Center.

The timing of disclosure matters. Landowners who want to see if a nearby well is polluting their land or water need a baseline assessment of chemicals that are present before drilling. If they don’t know the chemicals the company will inject, the only way to get a baseline reading is to test for a vast number of chemicals, an expensive and impractical undertaking.

“Knowing after the fact is nice, but does not allow for any steps to be taken if the chemicals being used are of concern to the public. I urge the Interior Department to strengthen this rule,” Congressman Maurice Hinchey (D-NY) said in a statement. Hinchey co-authored national legislation to give the EPA the power to monitor all fracking activities in the U.S., which under current law the agency cannot regulate.

The proposed disclosure rules would not demand much more than the standards some states already have in place. For example Colorado and Wyoming have large swaths of public lands targeted by the draft rules, but they already have disclosure regulations that are equally stringent, if not more so, than the federal proposal. Colorado requires that companies disclose the chemicals they use in addition to their concentrations within 60 days of fracking activities. Wyoming requires disclosure of chemicals both before and after fracking, although its regulation has been criticized for not making all of those disclosures public.

“It seems like BLM has looked at state rules as a ceiling, not as a floor, for what should be done,” said attorney Schlenker-Goodrich, who charged that the administration was putting forward “half-measures.”

Industry charges that the rules would slow down drilling too much. The Independent Petroleum Association of America and ExxonMobil did not immediately respond to requests for comment, but the IPAA head Barry Russell told Reuters that the rules will “will undoubtedly insert an unnecessary layer of rigidity into the permitting and development process.”

Once the draft rule is published in the Federal Register, the BLM will take comments for 60 days before it finalizes the rule.