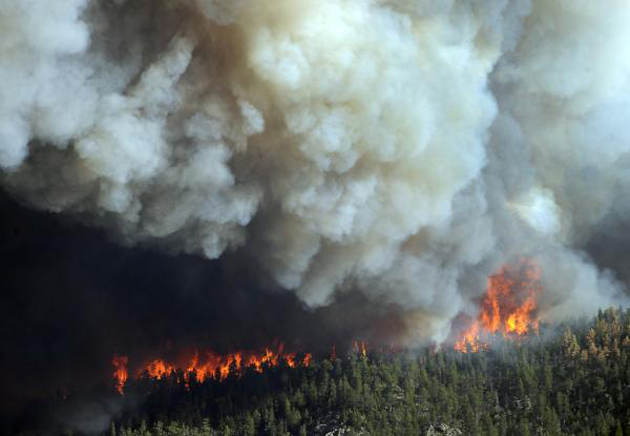 The High Park fire rages in northern Colorado on Monday.@j_noecker via Twitter

For the past 30 years, residents of tiny Laporte, Colorado, near the Wyoming border, have gathered inside Bob’s Coffee Shop to swap gossip over coffee and Danishes near the dense pine forest of Lory State Park. But since the weekend, Bob’s has become a very different kind of social hub: a de facto refugee camp for homeowners fleeing what many here call the worst wildfire in decades.

From a booth just a mile and half from the fireline, Bob’s owner Chris McCullough described in a phone interview seeing forest ridges ablaze with arching orange flames, a sky blanketed in thick white smoke, and ash falling like snow. At other tables, locals shared updates about the fire’s spread and talked about what they were—and weren’t—able to save from their homes, which may—or may not—still be standing.

“It’s the fastest-growing, hottest-burning fire I’ve ever seen,” said longtime resident and Bob’s patron John Brewer, whose home was evacuated Saturday night. “I don’t know how we’re going to survive this one.”

“It’s the fastest-growing, hottest-burning fire I’ve ever seen,” said one longtime resident. “I don’t know how we’re going to survive this one.”

Other evacuated locals agreed. “The whole hillside was erupting as we were looking at it,” said Charlie Wrobbel, who was awoken in bed with his wife Saturday night by the sudden flash of 40-foot flames a few hundreds yards from the doorstep; they snatched up pets and what personal items they could carry and drove off. “We were heartbroken, because we didn’t know if there would be anything to come home to.”

By Monday afternoon, they still didn’t.

The High Park fire, as it’s known, had grown to nearly 60 square miles by late Monday, making it, along with a massive fire still raging in New Mexico, one of this year’s earliest of the mega-fires that ravage the West every summer. One man is believed dead, according to the local sheriff’s office, along with over 100 structures destroyed. The fire was started by lightning, which on Saturday morning ignited a stand of pines that, after an unusually arid winter and spring, were 30 percent drier than normal.

As presumptive GOP presidential contender Mitt Romney faces criticism for wanting to slash firefighting jobs, the Colorado blaze has reignited debate over a controversial question: Are devastating fires like this one caused by climate change?

“That’s always the question people want to ask!” says Texas Tech University climate scientist Katharine Hayhoe, laughing. She coauthored a report released today in Ecosphere, the peer-reviewed journal of the Ecological Society of America, that is one of the first studies to look at how climate change impacts wildfires on a global scale.

“The traditional answer is: We can’t say anything about just one event,” Hayhoe said. With this report, “we can say a little bit more than that now.” Hayhoe, along with an international team of scientists, discovered that climate change will disrupt fire patterns across over 80 percent of the globe by the end of the century. “Scientists found compelling agreement in long term models that more fires would occur at mid-to-high latitude areas like North America (shorter term models present more variability).”*

A University of Arizona report from 2006 found that large forest fires occurred more frequently in the Western United States since the mid-1980s as spring temperatures increased, snow melted earlier, and summers got hotter, and that the fire season has grown. According to University of California-Berkeley fire ecologist Max Moritz, the Colorado fire features “a lot of the characteristics we would expect under climate change,” including plentiful, dry fuel as a result of low precipitation.

The changes Hayhoe and Moritz predict don’t apply only to fires in the West. Wildfires, until now, have been studied up-close, in specific regions of the world. But this report, which combines 16 climate change models, allows scientists to zoom out. “The spatial extent of the disruption raises our awareness that climate change’s effect on fire is not just a regional issue. It’s not unique to certain parts of America,” Hayhoe said. In particular, the world’s grasslands, desert shrublands, and temperate conifer forests (like the one now burning) are likely to see more fires.

An unrelated study, out yesterday from a team of UC-Berkeley fire ecologists, suggests that as fires become more frequent and severe, controlled burns should be amped up to clear out excess fuel. Thinning out forests with controlled burns has become an increasingly popular tool of forest managers in recent decades, a reversal of the early 20th-century policy of fire suppression.

The take-home message for Mortiz is that we need to be on our toes. “It’s not that fire is good or bad,” he says. “It’s that it’s changing…humans and plants and animals in these landscapes, we’re all going to be shuffling and adapting, and it affects everything that we rely on.”

Bob’s Coffee Shop ran out of coffee late Monday, after serving up dozens of pots of complementary brew for evacuees still reeling from their narrow escape. Still, Wrobbel said, Westerners are used to getting burned by Mother Nature and coming back stronger for it: “Out West, it’s either feast or famine.”

Share your photos of the fire with Climate Desk via Twitter, and we’ll include them in our slideshow.

Correction: An earlier version of this post incorrectly stated that towards the end of the century, mid-to-high latitude areas like North America could experience more than 60 per cent more fires. This figure actually describes the level of agreement between probability models used by scientists in the report.