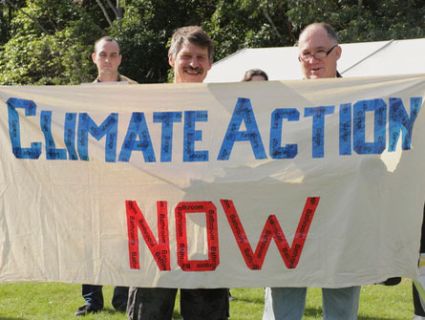 In 1992, world leaders signed up to something called “sustainability”. Few of them were clear about what it meant; I suspect that many of them had no idea. Perhaps as a result, it did not take long for this concept to mutate into something subtly different: “sustainable development”. Then it made a short jump to another term: “sustainable growth”. And now, in the 2012 Rio+20 text that world leaders are about to adopt, it has subtly mutated once more: into “sustained growth”.

As political economist Robert Skidelsky, who comes at this issue from a different angle, observes in the Guardian today:

“Aristotle knew of insatiability only as a personal vice; he had no inkling of the collective, politically orchestrated insatiability that we call economic growth. The civilization of “always more” would have struck him as moral and political madness. And, beyond a certain point, it is also economic madness. This is not just or mainly because we will soon enough run up against the natural limits to growth. It is because we cannot go on for much longer economizing on labor faster than we can find new uses for it.”

Several of the more outrageous deletions proposed by the United States—such as any mention of rights or equity or of common but differentiated responsibilities—have been rebuffed. In other respects the Obama government’s purge has succeeded, striking out such concepts as “unsustainable consumption and production patterns” and the proposed decoupling of economic growth from the use of natural resources.

At least the states due to sign this document haven’t ripped up the declarations from the last Earth summit, 20 years ago. But in terms of progress since then, that’s as far as it goes. Reaffirming the Rio 1992 commitments is perhaps the most radical principle in the entire declaration.

As a result, the draft document, which seems set to become the final document, takes us precisely nowhere: One hundred ninety governments have spent 20 years bracing themselves to “acknowledge”, “recognize,” and express “deep concern” about the world’s environmental crises, but not to do anything about them.

This paragraph from the declaration sums up the problem for me:

“We recognize that the planet Earth and its ecosystems are our home and that Mother Earth is a common expression in a number of countries and regions and we note that some countries recognize the rights of nature in the context of the promotion of sustainable development. We are convinced that in order to achieve a just balance among the economic, social, and environment needs of present and future generations, it is necessary to promote harmony with nature.”

It sounds lovely, doesn’t it? It could be illustrated with rainbows and psychedelic unicorns and stuck on the door of your toilet. But without any proposed means of implementation, it might just as well be deployed for a different function in the same room.

The declaration is remarkable for its absence of figures, dates, and targets. It is as stuffed with meaningless platitudes as an advertisement for payday loans, but without the necessary menace. There is nothing to work with here, no program, no sense of urgency or call for concrete action beyond the inadequate measures already agreed in previous flaccid declarations. Its tone and contents would be better suited to a retirement homily than a response to a complex of escalating global crises.

The draft and probably final declaration is 283 paragraphs of fluff. It suggests that the 190 governments due to approve it have, in effect, given up on multilateralism, given up on the world, and given up on us. So what do we do now? That is the topic I intend to address in my column next week.