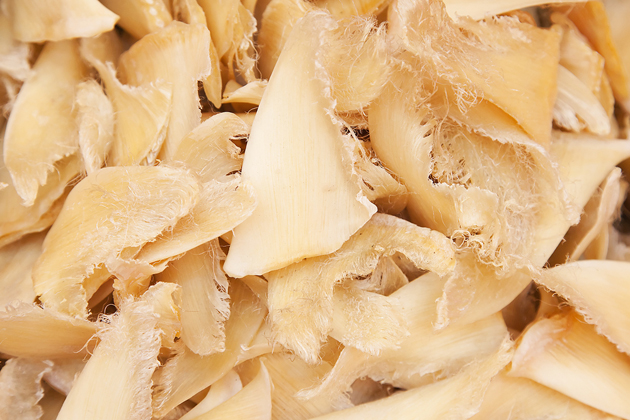 The appearance of a shark fin piercing the ocean surface is often seen as a sign of danger to humans. Even more dangerous to sharks is the sight of a shark fin floating in a bowl of soup.

Around the world, sharks are in crisis. Many species have suffered population declines of 90 to 99 percent in recent decades, mostly to feed the seemingly endless demand for the tasteless concoction known as shark fin soup, which is served to mark important occasions such as weddings and business deals in China and some other Asian communities. An astonishing 10.3 million kilograms of shark fins and shark fin-based products were imported into Hong Kong in 2011, according to statistics released last week by the Pew Charitable Trusts Environmental Group in the report, “Navigating Global Shark Conservation: Current Measures and Gaps” (pdf). The organization says Hong Kong imports about half of the world shark fin harvest.

The Pew group obtained these figures from the Census and Statistics Department of Hong Kong, but even they don’t tell the whole story. Previous research (pdf) has estimated the total worldwide shark fin catch to be three to four times what is legally reported. Because so much of the shark trade is illegal and carried out in the black market, the true total number of sharks killed each year is impossible to ascertain, but the Sea Shepherd Conservation Society and other organizations estimate it at more than 100 million. Another group, Shark Defenders, puts the annual average at 38 million, citing the same 2006 research that quantified the shark-fin trade.

Another hidden part of the story, according to the Pew report, is the types of sharks being caught. Many of the nations that allow shark fishing do not require good record-keeping and allow fishermen to log all of their catches simply as “sharks” rather than specific shark species. Some nations even report their take in extremely broad categories such as “sharks, rays, skates, etcetera,” so there’s no specificity to what their fishing fleets actually landed.

The wide range of regional shark protections—or nonprotections, as is often the case—also presents problems, according to the report, which presents a picture of what it dubs “an inadequate patchwork of varying measures at the domestic, regional and international levels for trade regulation or shark protection.” The report found that only one third of the countries where shark fishing takes place bans shark finning—the practice of catching a shark, stripping it of its fins and dumping the body (often still alive) back into the water. Pew also found that few nations have laws in place to protect individual shark species—even if species found in their waters are threatened or endangered. And then there is the challenge of enforcement, even where regulations exist.

The report does not count sharks caught by Chinese fishing vessels for sale within Hong Kong and mainland China.

The Pew Environmental Group makes several recommendations in its report, including banning all fishing of any shark species listed by the International Union for Conservation of Nature (IUCN) as threatened or endangered and developing science-based management plans for all other shark species. The IUCN lists 480 shark species on its Red List of Threatened Species, 150 of which are listed as threatened or near threatened. Of the 62 shark species that are considered “highly migratory”—and therefore most likely to cross national boundaries, which makes them harder to protect amidst the patchwork of regulations—82 percent are listed as threatened or near threatened. More than 200 of those species lack sufficient data for assessments to be made of their health and conservation status.

Shark finning is falling out of favor in a few places, albeit slowly. A handful of US states have banned shark fishing or—as Illinois did earlier this month—the possession, sale, trade or distribution of shark fins. Even China itself just announced that it will stop serving shark fin soup at official banquets—in approximately three years.