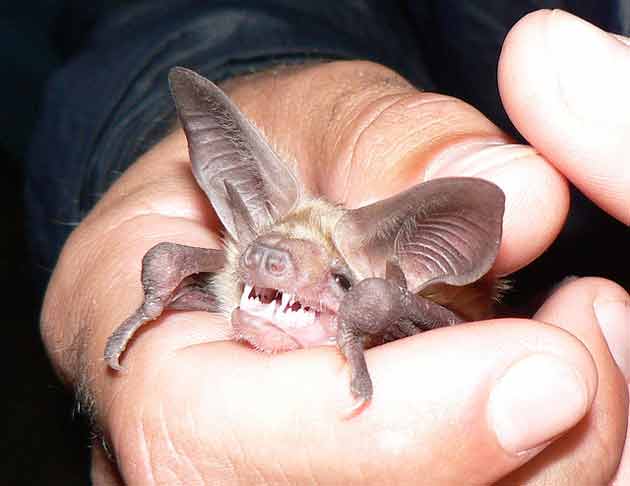 One October evening, as an autumn chill descends with the darkening sky, a great cloud of bats will rise out of the woods at a pre-arranged signal and dive with their thousands of beating wings down a concrete shaft and into a secure underground bunker, AKA the bat cave.

At least, that is what is called for in the script. The structure is an artificial bat cave, believed to be the first of its kind. Conservation groups are looking to the bunker to provide protection against an aggressive new disease that threatens to annihilate North America’s bat population.

Work on the bat cave, built just over a metre below ground on a hill about 70 miles north-west of Nashville, began in late August, and should wind up this month. For those approaching the structure through the steel doors designated for humans, it feels a bit like entering a tomb. But for North American bats it could provide a shot at survival.

As many as 6.7 million North American bats are believed to have been killed by the disease known as white-nose syndrome since its presence was first detected in a New York cave in 2006.

The disease has struck in 19 states and four Canadian provinces, wiping out 90 percent of the population in some caves in the north-east.

White-nose arrived in Tennessee last March in two caves used by grey bats, which are classed as an endangered species.

“We were concerned we could lose a couple of species in a year or two,” said Cory Holliday, the cave expert for the Nature Conservancy in Tennessee, the organisation building the bat cave.

The bats’ drastic decline has broad implications: the animals eat their weight in mosquitoes and other insects each day. By some estimates, they save American agriculture $3.7bn (£2.3bn) a year.

The disease attacks bats during the hibernation season, depositing white fluff on their muzzles and rousing them from their torpor, causing them to burn through fat stores.

Researchers say it is caused by a soil fungus, introduced to North America by European hikers. There is, to date, no known treatment.

However, some conservationists figured that if they could construct a bat cave free of the fungus that causes the disease, and then decontaminate the area each year, it would be possible to protect bat populations.

“I call it our crazy idea but what if we could just get them out of the cave?” said Mark Thurman, a wildlife biologist with Tennessee Fish and Wildlife Agency who is credited with coming up with the original plan. “We had the concept for a while but we were very, very quiet because it was a pretty wacky idea,” he admitted.

But what chance would the bats have if the researchers did nothing?

So the conservation group, working with the state wildlife agency, decided to build a bat hibernaculum that could be scrubbed out with ammonia each autumn and spring, keeping the cave clean of the deadly fungus.

“It’s easily controllable in a controlled environment. There are lots of things that kill this fungus. But nothing that kills the fungus could be used in a natural cave environment because it would kill everything else and be detrimental to the eco-system,” Holliday said.

Other bat experts agreed. The artificial cave would also provide a chance to study how bats – and the disease – react to different temperatures.

Bats are used to built-up environments—they regularly use abandoned mine shafts. But getting the bats to put this particular cave on their radar could be tricky.

The cave was engineered to draw a continual supply of winter air from a concrete shaft to provide the chilly temperatures favoured by hibernating bats. Stale air is released through a chimney.The shaft also serves as the entrance for the bats.

The ceiling is scored with ridges and rough edges, the better to give bat claws a tight grip. Walls are lined with sheets of open mesh and fine screens – even a slab of board, with a gap for crevice-loving bats to roost in.

There is no electric ventilation system. The Nature Conservancy said it wanted to keep costs down – this cave cost $300,000. Electric cooling systems would be too costly to run and potentially risky if there was a power failure. But there will be three surveillance cameras with infrared imaging, allowing researchers to monitor bat movements.

If the bat cave works, it could provide a rescue plan across North America. “This is a working prototype. Others could use it,” Holliday said.

But there are no guarantees the bats will even deign to use the artificial space.

“It’s a neat idea for sure but the trick will be seeing whether bats will use it first of all. The second thing will be seeing how they regulate the micro-climate inside, which is super-important for bat hibernation,” said Craig Willis, a bat expert at the University of Winnipeg.

Bats are used to built-up environments – they regularly use abandoned mine shafts. But getting the bats to put this particular cave on their radar could be tricky.

The Nature Conservancy deliberately sited their bunker a few steps away from a natural cave, used by tens of thousands of bats each winter.

Holliday also plans to play recordings of bat calls, inaudible to humans, once the creatures start to swarm.

The biggest challenge, however, will be maintaining the right temperature and humidity – especially this year.

A construction delay means the cement blocks of the bunker are still emitting heat, making the temperature a comfortable 17Cwhich is too hot for hibernating bats, who prefer temperatures in the 2-9C range.

Holliday was planning to bring in two air-conditioning units this week to try to cool down the cave before the swarming season. Like the effort to find a cure for white-nose syndrome, it’s a race against time.

“A lot of us are just crossing our fingers at this point,” said Holliday.