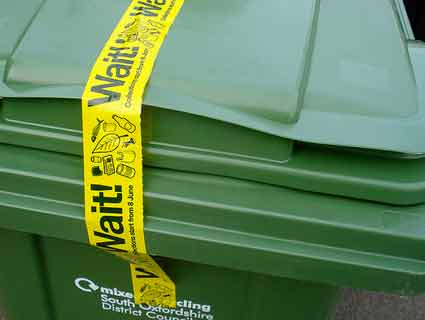 Whenever I travel west to visit the Mother Jones mother ship in San Francisco, I’m awed by the number of trash bins. There are color-coded bins for compost, recycling, and trash, and the city disposes of all of them separately. When it comes to composting, San Francisco is a shining beacon of decaying organic matter. Sixteen years into the program, the city collects 600 tons of yard and food waste every day, according to Governing Magazine.

Following SF’s lead, nearly 100 cities now have curbside composting. (My home city of Washington, DC, is not one of them; we have to pay someone to come take our compost away.) While short of the full-service composting in places like San Francisco, 24 states have also passed laws banning yard waste from landfills. Keeping food scraps, leaves, tree limbs, and grass clippings out of the municipal waste facilities preserves limited space, and it saves money. Why don’t more cities and states make it easier for us to compost? The answer: Big Trash.

Earth Island Journal explores the world of for-profit trash collection and its influence on state composting policies in its fall issue. In the piece, writer Jason Mark looks at Waste Management, the largest garbage company in the United States, and its lobbying efforts to change state laws enacted to keep compostable yard waste out of landfills:

Since 2009, Missouri, Florida, and Georgia have re-written their laws governing yard waste in landfills. In two of those states—Florida and Georgia—Waste Management played a prominent role in pushing to overturn the yard waste bans. Earlier this year, Waste Management made an effort, unsuccessful so far, to rewrite Michigan’s yard waste law. A Waste Management executive, Vice President Tom Horton, told lawmakers that the Michigan yard waste ban is a subsidy for composting businesses and “should be viewed as…corporate welfare.”

These efforts to keep organic waste out of dumps have been pretty successful so far. The US created 250 million tons of trash in 2010, 34 percent of which was diverted from the waste stream by composting or recycling. Yard trimmings and food scraps account for 27 percent of the waste we have been able to keep out of the landfill through these forward-thinking compost policies.

“Waste Management’s business model is based on controlling the landfills and ensuring that a lot of materials go there.”

But Waste Management, which makes money off hauling and dumping our waste, sees this as a threat to its business model. And it’s quite a bit of money. Waste Management’s revenues for just the second quarter of 2012 was $3.46 billion. “Their business model is based on controlling the landfills and ensuring that a lot of materials go there,” Peter Anderson, executive director of the Center for a Competitive Waste Industry, told Earth Island Journal.

Waste Management also has a lot of political muscle. The company spent $730,000 on federal lobbying in 2012, and it also has a political action committee that spends hundreds of thousands of dollars on federal candidates.

At the state level, Mark writes, it has been even more powerful. In Georgia, the company gave $105,000 to candidates in 2010, the year before that state changed its rules about yard waste. Under the new rule, instead of composting the yard waste, it would have to be sent to a landfill with a methane-capture system. A lobbyist for the Sierra Club in Georgia called ending the ban on yard waste in landfills “the greatest setback to recycling and waste reduction we’ve ever had” in an Atlanta Journal-Constitution article that documented the role the waste management industry played in the new law. Also from that article:

If approved, the bill would end a state ban on yard trimmings in landfills that was imposed in 1996 with the stated goals of conserving landfill capacity and promoting recycling. Delaware this year became the 23rd state to impose such a ban.

The city of Atlanta and the federal Environmental Protection Agency are on the side of environmental lobbyists who are working to kill the bill. On the other side, the waste management companies have lobbyists, attorneys and what some would argue is a distinct advantage: They wrote the bill.

In 2010, Waste Management also gave $235,000 to state politicians in Florida and had 13 lobbyists working on their behalf. That year, the state repealed its ban on yard waste in landfills, over a veto from then-Gov. Charlie Crist, who said the measure would be “a step backward” in Florida’s efforts to be a leader in recycling.

This doesn’t just mean less mulch for your garden. The Center for a Competitive Waste Industry also points out that there are climate-related reasons to keep organic waste out of landfills. Methane is 20 times more potent than other greenhouse gases, and while dumps can capture a some of the gas released from rotting pills of plant matter, they aren’t capturing anywhere near all of it. A May 2011 report from the US EPA found that composting all the food scraps in California alone would cut emissions by 5.8 million metric tons each year.