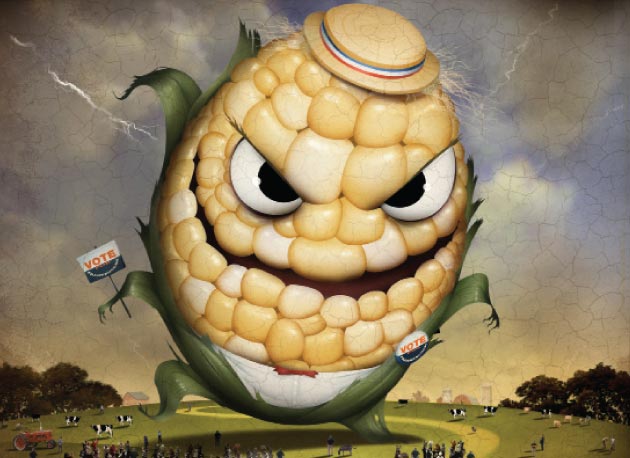 You’d be forgiven for not noticing—unless you live in California, where you’ve likely been bombarded by geotargeted web ads and TV spots—but this election could spur a revolution in the way our food is made. Proposition 37, a popular Golden State ballot initiative, would require the labeling of food containing genetically modified (GM) ingredients. The food and agriculture industries are spending millions to defeat it, and with good reason: As we’ve seen with auto emissions standards and workplace smoking bans, as California goes, so goes the nation.

At least 70 percent of processed food in the United States contains GM ingredients. Eighty-eight percent of corn and 93 percent of soybeans grown domestically are genetically modified. Soda and sweets are almost guaranteed to contain GM ingredients, either in the form of corn syrup or beet sugar. Canola and cottonseed oils also commonly come from GM crops. But if those stats make you want to run and examine the labels on the boxes and cans in your pantry, you’re out of luck. Unlike the European Union, the US government doesn’t require food manufacturers to disclose their use of genetically modified organisms (GMOs).

Californians appear ready to change that: An August poll found voters in the state favoring Prop. 37 by a margin of 3-to-1. And if they do approve the measure, food companies might well start disclosing GMOs nationwide, since it would be expensive and cumbersome to produce one set of labels for California, home to 12 percent of the nation’s population, and another for the remaining 49 states. California voters already have a record of being leaders in food reform: When they passed a ban on tight cages for egg-laying hens in 2008, the egg industry initially fought it. But by 2011, it had begun working with animal welfare groups to take the California standards national.

Why the push to label GMOs? After all, these crops have been marketed as environmental panaceas, and some prominent greens have been convinced. By opposing GMOs, environmentalists have “starved people, hindered science, hurt the natural environment, and denied our own practitioners a crucial tool,” Stewart Brand wrote in his 2009 book, Whole Earth Discipline: An Ecopragmatist Manifesto. So far, biotech giants like Monsanto, DuPont, and Syngenta have commercialized two main GM “traits,” engineering crops with the bug-killing gene from the insecticide Bacillus thuringiensis (Bt) and crops that can withstand Monsanto’s Roundup and other herbicides. Yet GM crops’ herbicide resistance has caused a 7 percent net increase in pesticide use in the United States since 1996, according to a recent paper by Washington State University researcher Charles Benbrook.

The industry swears genetically engineered foods are safe even though their potential risks have not been fully studied. Back in 1992, the Food and Drug Administration declared GM foods essentially equivalent to foods derived from non-GM plants, and it has implemented no requirements for safety testing. GMOs have been in the food supply since 1996, which isn’t long enough to tell whether they are having subtle negative effects on our health. Plus, as the advocacy group Food & Water Watch recently reported (PDF), long-term safety studies have been limited because the biotech industry uses its patent power to prevent independent scientists from cultivating GM seeds for research purposes.

In the EU, where labeling has been required since 1997, most consumers have rejected GMOs. No wonder the GM seed industry has been shoveling cash into fighting Prop. 37.

Some independent, peer-reviewed research has suggested trouble, however. GMOs are capable of creating novel proteins that can turn out to be allergenic, as Australian scientists found when they tested a pea variety that had been engineered to express an otherwise harmless protein from the common bean. A 2009 study by French researchers found that rats fed Bt and Roundup-tolerant corn for three months showed declines in kidney and liver function. While such findings don’t establish that GMOs are unsafe, they do leave the question wide open—and validate demands for labeling. GMOs are a “massive experiment on the American people,” says Stacy Malkan, media director for the pro-labeling group Yes on 37 for Your Right to Know If Your Food Has Been Genetically Engineered. “We absolutely have a right to know and choose for ourselves if we eat genetically engineered foods.”

If Prop. 37 wins and the food industry eventually takes labeling nationwide, will it present a serious challenge to GMOs? One possibility is that consumers will simply ignore the labels and continue shopping as usual. Or not: A 2010 Thomson Reuters poll (PDF) found 93 percent of respondents in support of labeling; 40 percent indicated they wouldn’t choose to eat genetically engineered vegetables, fruits, or grains. In the European Union, where labeling has been required since 1997, most consumers have rejected GMOs, essentially killing the market for them. Hostility toward the technology is so strong that the German chemical giant BASF recently announced it would stop producing GM seeds for the European market.

No wonder the GM seed industry has been shoveling cash into the No on 37 Coalition Against the Deceptive Food Labeling Scheme. As of early fall, it had raised $32 million, eight times as much as the pro-labeling group. Its list of funders reads like a Big Food and Ag trade group: Major donors include Monsanto ($7.1 million), DuPont ($4.9 million), Dow ($2 million), and PepsiCo ($1.7 million). The parent companies of major organic brands have also lined up against Prop. 37, including Coca-Cola (Honest Tea), General Mills (Cascadian Farm), Kellogg (Kashi), and Dean Foods (Horizon Organic). The No on 37 campaign’s treasurer is Thomas Hiltachk, a prominent Republican lawyer and former tobacco industry lobbyist who has served as outside counsel to Philip Morris and helped lead the failed 2010 ballot initiative to repeal California’s climate law.

The group’s main strategy has been to portray the labeling measure as a needless burden and waste of money. An image on its website shows a farmer with his mouth taped shut and his body crisscrossed by red tape—never mind that the proposal imposes no requirements on farmers. The group has funded studies purporting to show that Prop. 37 would impose an additional $1.2 billion in annual production costs on California food processors and would increase household food prices by as much as $400 a year.

The Yes on 37 side is playing hardball, too. By early September, it had raised $4 million, mostly from the pro-organic, anti-corporate Organic Consumers Fund, independently owned food companies like Clif Bar and Nature’s Path, and a supplements distributor run by the quackish natural-health guru Joseph Mercola. In late August, it released a 30-second TV ad linking the GM seed industry to past chemical industry scandals, pointing out that Monsanto and Dow once staunchly defended infamous poisons such as DDT and Agent Orange.

If Prop. 37 passes, will it threaten the GMO giants’ bottom line? So far, the market seems unfazed about the prospect of mandatory labeling. Two months from Election Day, Monsanto’s share price was up more than 25 percent over last year’s, significantly outperforming the broader market and showing no evidence of investors’ fretting over the California ballot initiative. But Wall Street’s hyperfocus on the short term sometimes blinds it to major shake-ups approaching on the horizon.

By cutting fat checks and hauling out an old tobacco hand to defeat California’s labeling proposition, Monsanto and its peers are no doubt taking the long view. The US market for genetically engineered crops is by far the world’s largest, accounting for two-thirds of global annual GM seed sales of about $13.3 billion. This fight isn’t just about keeping consumers in the dark in a single state; it’s about keeping GMOs in farm fields and on supermarket shelves nationwide.