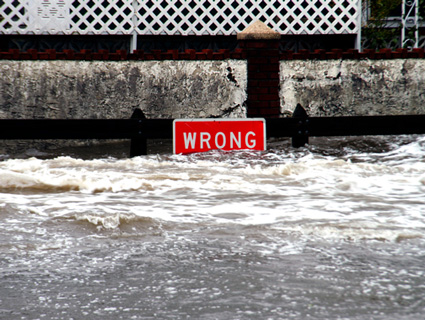 Superstorm Sandy—and its revival of the issue of climate change, most prominently through Michael Bloomberg’s sudden endorsement—probably aided President Obama’s reelection victory last night. But at the same time, there has been a vast debate about the true nature of the storm’s connections to global warming (as well as plenty of denialism regarding those connections). In fact, there has even been the suggestion, by cognitive linguist George Lakoff, that if we all stopped thinking about causation as something direct (I pushed him, he fell) and rather as something systemic (indirect, probabilistic), then we really could say with full accuracy that global warming caused Sandy. Systemically.

Following this debate, I’ve been struck by the strong impression that people are making things too complicated. Here’s the simple truth: Leaving aside questions of systemic causation—and sidestepping probabilities, loaded dice, atmospheres on steroids, and so on—we can nevertheless say that global warming made Sandy directly and unmistakably worse, because of its contribution to sea level rise.

“I keep telling people the one lock you have here is sea level rise,” meteorologist Scott Mandia explained to me recently. “It’s the one thing that absolutely made the storm worse that you can’t wiggle out of.” Mandia is an expert on the subject at Suffolk County Community College, and coauthor of the new book Rising Sea Levels: An Introduction to Cause and Impact.

And how do we know Mandia is right? Here’s the logic.

First, according to sea level expert Ben Strauss of Climate Central, the sea level in the New York harbor today is 15 inches higher than it was in 1880. Now, to be sure, not all of that is due global warming—land has also been subsiding. Strauss estimates that climate change—which causes sea level rise both through the melting of land-based ice, and through thermal expansion of warm ocean water—is responsible for just over half, or eight inches, of the total. As it happens, the estimated sea level rise seen globally since the year 1880 is also roughly eight inches.

So how, then, did global warming directly make Sandy worse? Simple: Sandy threw the ocean at the land, and because of global warming, there were about eight inches more ocean to throw. “The footprint of the flood was bigger, based on roughly eight extra inches of depth,” Strauss explains—eight inches more than there would have been in an admittedly hypothetical world in which Sandy arrived without our burning of fossil fuels or heating of the atmosphere.

The next question is whether those eight inches are really significant, in the grand scheme of things. Sandy’s flood height above the average high tide level (a number that also includes the eight inches attributable to global warming) was 9.15 feet. So you might say, who the heck cares about eight inches?

But as it turns out, eight inches matters a lot. First of all, using Climate Central’s Surging Seas tool, Mandia estimated that 6,000 more people were impacted for each additional inch of sea level rise. That means, basically, that they got wet when they wouldn’t have otherwise: one inch wetter for some, eight inches wetter for others, and everything in between. “An inch or two could be enough to get over a home’s threshold and down into the basement, or make it into one more subway entrance,” Strauss explains.

As the water level increases, the level of damage tends to rise much more steeply than the mere level of water itself.

Moreover, there is also reason to think that the second inch, so to speak, is worse than the first one. That’s because of basic physics. Water flowing atop a surface—say, a New York City street—has its energy sapped by the friction of dragging along that street. However, if the water level is higher, it’ll flow faster, because the water higher above the surface experiences less friction. “If you had an inch of water running down the street, you’d see all kinds of turbulence in it, which is basically energy being lost,” Strauss explains. “But if the water were a foot above it, you’d see more sheet-like movement, which is a more powerful motion.”

Speed matters a great deal in the context of a storm surge, because the surge is only temporary and will recede. So how far it penetrates before doing so is partly a function of is speed.

And there are still more reasons to think that increasing the size of a storm surge by eight inches really matters. Consider the US Army Corps of Engineers’ “depth-damage” functions, which the Corps uses to study how much flood damage grows with an increasing water level. The upshot here, says Mandia, is that “the damage is exponential, it’s not linear.” Or in other words, as the water level increases, the level of damage tends to rise much more steeply than the mere level of water itself.

And here’s one more hard reality: If we do nothing about global warming, eight inches of sea level rise is going to look like small beans. As Mandia notes, the New York State Sea Level Rise Task Force estimates up to 2.5 feet of sea level rise by 2050, and up to 4.5 feet by the 2080s. In these scenarios, global warming’s contribution to every storm surge event would be dramatically worse than it currently is. And while those are worse cases, there’s not any real doubt that waters will rise further; the question is simply by how much, and how fast.

None of which is to say, incidentally, that global warming didn’t influence Sandy in other ways, ranging from its rainfall to the impact of warmer seas on the storm’s overall intensity. In all likelihood, such connections also exist.

At the current moment, Strauss’s tools are not precise enough to say that the portion of sea level rise attributed to global warming damaged a particular home in a particular place. Nevertheless, based on the evidence presented here so far, the inference is simple and unavoidable: Global warming upped Sandy’s damage, and did so substantially. Not that Sandy wouldn’t have been very bad anyway—it would have—but that it was worse than it would otherwise have been.

“There is 100 percent certainty that sea level rise made this worse,” Strauss says. “Period.”