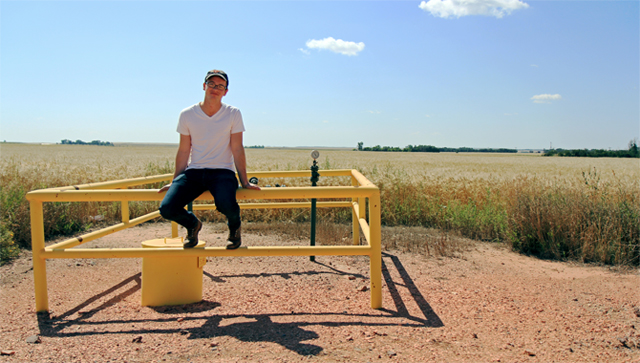 This summer, James West and I hopped in our mud-caked rental sedan and followed the oil tankers out of Williston, ND. On my notepad was a scribbled address, a spot deep in the North Dakota prairie, just off the shores of serpentine Lake Sakakawea, twenty miles from the nearest town. As we drove oil rigs cropped up in every direction, each indistinguishable from the last. But somewhere out there was the one we were after: the one with my name on it.

In the most recent issue of Mother Jones, we reported on the explosive growth happening in North Dakota as a result of fracking. The drilling technique has unlocked massive deposits of oil from the Bakken Shale, which translate directly to massive deposits of cash for everyone from truck drivers to rig operators to local strippers to the Big Oil kingpins of Houston and Oklahoma City. And in the interest of full journalistic disclosure, I think it’s about time I came clean: A few of those dirty fracked dollars are in my family’s greasy little pocket.

A couple weeks ago, my grandma, a wise and exacting matriarch with a bone-dry wit, cashed in her latest fat paycheck from ConocoPhillips. She claims to have “already forgotten” how she spent the money, a cool $27.82.

“Your mother said, ‘You’re supposed to split it with us’,” Cynthia Marty, “Nana” to my siblings and me, says with a wry chuckle. “She can go to hell.”

That’s right: In the last several years, as fracking has grown into one of the most divisive environmental issues of our time, my family has profited from it to the tune of nearly $200. It goes back to a fateful day in 2008, shortly after George, Nana’s husband, “Papa” to me, passed away. Sorting through papers in his gargantuan old rolltop desk, Nana, 82, came across a yellowed, official-looking document with the imprimatur of the State of North Dakota. It dated from the early 1930s, and conferred mineral rights—that is, a claim on anything sucked up from under the ground, but not the surface itself—to a plot of land identified only by an obscure numbered code.

“I didn’t know what to file it under,” Nana says. “In fact, I was tempted to throw it away.”

A few phone calls to distant relatives and estate lawyers later, Nana found that the rights were originally purchased by her uncle Stewart Kelley, who lived in Omaha at the time but had grown up in the early twentieth century in Lakota, North Dakota, across the state from the plot he eventually staked. A succession of deaths and wills led the document to Papa, and now it was in Nana’s hands.

“I didn’t know what to file it under,” she says, referring to the fact that our family isn’t traditionally in the habit of holding oil claims in one of the world’s most active drilling regions. “In fact, I was tempted to throw it away.”

Good thing she didn’t. Within a few months, Nana’s phone rang with a call from Burlington Resources, a subsidiary of ConocoPhillips, looking to lease our rights. Past attempts to drill here had come up empty handed, but she figured: What the hell? So she agreed. By the summer the developer, with modern fracking technology at its disposal, tapped the Bakken Shale in our spot and started carting away oil by the thousands of barrels. But for us that didn’t exactly mean a meteoric rise to the oil-garchy: Divided between other rights holders in the area, and the company itself, our take was… small. Really small. Like, 0.029297 percent, according to Nana’s pay stub. In September 2009, the well cranked out 202 barrels of oil, worth about $12,500, and Nana got her first cut: $3.66. Only a couple quarters shy of a large latte.

That’s a common story, explains North Dakota State University agricultural law expert David Saxowsky. While our total slice of North Dakota’s fracked pie would hardly cover the tip for a night out with the good ol’ boys at a posh Houston steakhouse, in 2009 mineral royalties and signing bonuses added up to $1 billion statewide. And the state’s Department of Mineral Resources estimates that the typical well will pay out $10 million in royalties over three decades. But Saxowsky estimates that at least half the state’s mineral rights are held by the state and federal governments, and railroad companies, leaving slim chances for the average McDonnell to strike it rich. With the occasional Jed Clampett-esque exception, he says, regardless of the fracking boom North Dakota is littered with “an awful lot of people who hold no mineral rights, or very small ones.” 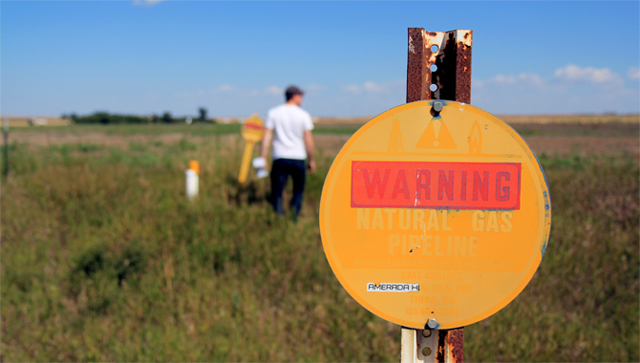 North Dakota is littered with “an awful lot of people who hold no mineral rights, or very small ones.” James West/Climate Desk

With this in mind, curious about what we might find and desperate to escape the frenzy of Williston, we hit the road. We drove until the paved highway turned to dirt, through rolling green and yellow grassland, over “criks”—North Dakota-ese for “creek”— and between incongruous outcrops of crumbling rock. We drove past abandoned farms and grey, disintegrating clapboard ranch houses, long since left for dead, relics of a vanishing period of North Dakota history. In their place, here in the heart of the Bakken, were the tools of a new breed of pioneers: Lifted pickup trucks, air-conditioned office trailers, razed dirt lots, and a shiny oil rig hard at work every half mile down the road. Finally, a hard right on County Route 6, and we’d arrived.

“Dad would have thought it was something frivolous. Certainly in his lifetime it did nothing.”

The Washburn Angus ranch, and the home of the Washburn family, is adrift in the middle of all this. It’s a beautiful house walled in by flowers, with a few head of cattle moseying around, flurries of grasshoppers, and a big, dumb, slobbery dog at the door. Still, not exactly a palace considering the riches underfoot: The Washburns own the land that sits so inconveniently on top of my minerals. I wanted to ask them about the changes in this area, about the wells, if they knew who my great-uncle was. But it was Sunday morning, and the Washburns were nowhere to be found. (They still haven’t returned my phone calls.) So we were left to explore on our own—outside of any fences, of course. There were a few other well holes on our plot, which I knew from my research were dry—the explanation for how our rights could have gone unnoticed in a desk drawer for more than half a century.

Natural gas flares dotted the horizon and a deep, industrial gurgling resonated through the whole area, but there wasn’t a soul in sight, and no other clues as to which of these many wells was the one funneling lunch money to my grandma. So we packed up and left the oil fields in our dust.

The last time Nana was in North Dakota was nearly eighty years ago, as a little girl visiting the relatives who founded our future fracking dynasty. At that time, she says, there wasn’t much there besides a few small towns and lots of dust. As anyone who has seen the state’s recent fracking boom can attest, a lot has changed since then. Meanwhile, a crumpled piece of paper bided its time. “Dad would have thought it was something frivolous,” Nana says, reflecting on our deed’s long, dark banishment. “Certainly in his lifetime it did nothing.”

It’s still not doing much today. But Nana says it’s tangible proof of the good foresight of an ancestor. In that way, she says, “it feels like a gift.”