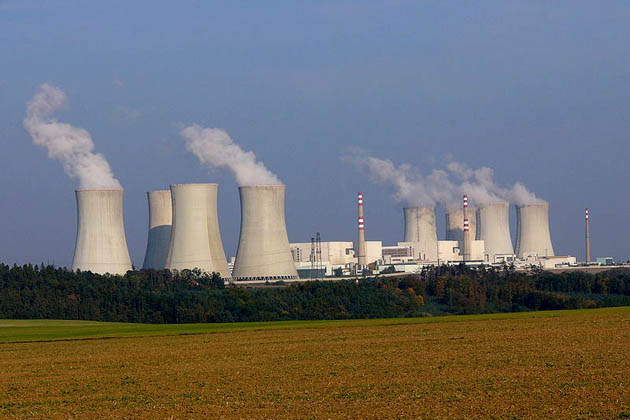 This story first appeared on the Slate and is reproduced here as part of the Climate Desk collaboration.

James Hansen, NASA’s top climate scientist, is one of the most impassioned and trusted voices on global warming. People listen closely to what he says about how drastically the climate is changing.

But when Hansen suggests what to do about it, many of those same people tune him out. Some even roll their eyes. What message is he peddling that few seemingly want to hear? It’s twofold: No. 1, solar and wind power cannot meet the world’s voracious demand for energy, especially given the projected needs of emerging economies like India and China, and No. 2, nuclear power is our best hope to get off of fossil fuels, which are primarily responsible for the heat-trapping gases cooking the planet.

Many in the environmental community say that renewable energy is a viable solution to the climate problem. So do numerous energy wonks, including two researchers who penned a 2009 cover story in Scientific American asserting that “wind, water, and solar technologies can provide 100 percent of the world’s energy” by 2030. Hansen calls claims like this the equivalent of “believing in the Easter Bunny and Tooth Fairy.”

He’s not the only environmental luminary who is bullish on nuclear power. Last year, Columbia University’s Jeffrey Sachs, director of the Earth Institute, echoed Hansen’s argument. A number of other champions of nuclear power have stepped forward in recent years, from Australian climate scientist Barry Brook to American writer Gwyneth Cravens, author of Power to Save the World: The Truth about Nuclear Energy. A breakaway group in the traditionally no-nukes environmental movement has also begun advocating passionately for nuclear power. That story is the subject of a new documentary that is premiering this month at the Sundance Festival.

These are not corporate stooges of the nuclear industry; to a person, their embrace of nuclear power is motivated by a deep concern about climate change and the conviction that no other carbon-free source of energy is sufficient (and safe) enough to replace coal and gas. They see themselves as realists who want to solve the full equation of global warming and energy, not a fantasy version of the problem.

The stark reality of the challenge at hand is that the global politics of climate change has stalled. Few countries are willing to make economic sacrifices to reduce their carbon emissions.

Another reality is this: Coal is the source of nearly half the world’s energy. The International Energy Agency (IEA) released a report last month projecting that the trend will increase throughout the decade. “In fact,” according to IEA executive director Maria van der Hoeven, “the world will burn around 1.2 billion more tons of coal per year by 2017 compared to today—equivalent to the current coal consumption of Russia and the United States.”

Hoeven said the “the biggest hope for reducing emissions from coal plants” globally was natural gas, which has already started to happen in the United States. Although natural gas is cleaner than coal, it  too is a major source of greenhouse gases and prolongs our dependence on dirty energy. Then there is the controversial issue of fracking. The drilling technology has helped usher in a huge gas boom but has also triggered much grassroots opposition due to a new set of environmental concerns. Prominent greens were touting natural gas as a bridge to a clean energy future just a few years back, but if anything, gas seems to have put off investments in clean energy.

Where does that leave us? Some environmentalists continue to insist that renewable energy (primarily solar and wind) can provide enough juice to power the world. The Energy Collective, a site that boasts “the world’s best thinkers on energy & climate,” recently put up a piece titled: “100 Percent Renewable: The Only Way Forward.” (In fairness, the site features a broad range of views.) The article describes the climate imperative and states: “If human beings are to preserve modernity and planetary habitability, we must soon shift to 100 percent renewable energy in all sectors.”

This is, to put it charitably, wishful thinking. Renewable energy analyst Vaclav Smil lays out the major drawbacks with wind and solar: The energy it produces is intermittent, there is marginal storage capacity, it is still too costly, and it takes too long to scale up to become a meaningful substitute for coal. Community opposition to the industrialized footprint of solar installations and wind farms is increasing.

Make no mistake: All of these drawbacks, combined, should not prevent us from ramping up investment in renewable energy. Wind and solar should be part of the mix, period. But even if we max it out, the numbers don’t add up. Bill McKibben says we need to “do the math,” which is to take the known fossil fuel reserves that oil and gas companies expect to tap and add that to the carbon already trapped in the atmosphere. The total will end up leading to catastrophic climate change. It’s a powerfully frightening equation. But we also need to do the math for the energy equation, which should be equally frightening.

People like Smil and Brook have done the math, and that’s why Hansen et al. are hoping nuclear energy will bail us out. But might they, too, be pining for the impossible?

A 2009 report by the Carnegie Endowment for International Peace concluded that nuclear power would not “make a big difference in reducing carbon emissions in the next two decades, when the biggest reductions will have the most impact,” because the industry could not build enough reactors during that time. The report cited longstanding problems that have yet to be overcome, such as exorbitant construction costs, and unresolved issues related to uranium waste disposal. The growing sense of climate urgency combined with the slow approval for financing and construction of new nuclear reactors makes for a daunting challenge.

And this was before the 2011 Fukushima Daiichi power plant meltdown in Japan. Since then, safety concerns have prompted some countries to abandon nuclear energy plans; Germany is phasing out nuclear power altogether. (Perversely, this has resulted in more greenhouse-gas-emitting coal being burned.) Not that long ago, the industry was poised for a big rebound, but the future suddenly looks grim. Perhaps that is what led the Economist last year to largely write off nuclear energy as a lost cause—or at least not a viable substitute for fossil fuels.

Another factor stalling the so-called “nuclear renaissance” is cheap natural gas, courtesy of the shale boom. As the New York Times reported last year, the sudden glut and the rapid switch from coal to gas by many utilities “calls into question talk of a nuclear revival in the United States.”

At this point, if there is going to be a revival of nuclear energy anywhere, it appears it will happen only with the arrival of new technology (what is referred to as “fourth generation” design) that resolves longstanding concerns and is competitive price-wise with coal and gas. As Hansen himself said last year: “For base-load electric power, I think that we need next-generation nuclear power, which can be much safer and which can burn nuclear waste and solve that major problem with nuclear power.” The question is, will that vaunted “next generation” nuclear power arrive soon enough to supplant fossil fuels and save the climate from burning up?

Maybe that’s the wrong question to ask. Maybe we shouldn’t fixate on only one possible path to a low-carbon future, but rather accelerate progress along all the avenues (from nuclear and clean coal to solar and efficiency) that will get us to the same place—a planet with an atmosphere that remains hospitable. There is no guarantee any of them will get us there fast enough to stave off catastrophic climate change, but we have no other reasonable choice.