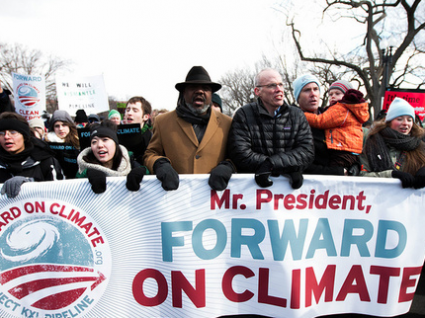 This story first appeared in The Guardian and is reproduced here as part of the Climate Desk collaboration.

Tens of thousands of protesters descended on Washington DC on Sunday demanding Barack Obama shut down the Keystone XL pipeline project to show he is serious about taking action on climate change.

A crowd that organizers put at 35,000, carrying placards in the shape of bright red stop signs, gathered at the Washington Monument on a bright, bitterly cold day for the march on the White House.

The event, billed as the largest climate protest in US history, was intended as a show of force before Obama renders his decision on the pipeline project in the next few months.

Protesters were bussed in from 30 states and Canadian provinces. Marchers held aloft banners proclaiming “Don’t be fossil fools” and “It’s time to cut carbon” during the rally.

The DC event was accompanied by smaller one in cities including Austin, where protesters chanted that the president had “sold out Texas” over the pipeline.

Opponents of the project—environmental activists, indigenous Canadian groups, and landowners along the pipeline route—have cast the Keystone XL as a defining issue of Obama’s second term.

They said Obama’s legacy rests on the Keystone XL, which they framed as a test of the president’s environmental credentials and his sweeping promises to use the next four years to protect future generations from climate change.

“Obama holds in his hand a pen and the power to deliver on his promise of hope for our children,” said Michael Brune, the director of the Sierra Club. “Today we are asking him to use that pen to reject the Keystone XL tar sands pipeline, and ensure that this dirty, dangerous, export pipeline will never be built.”

Others said Obama owed it to his supporters to reject a project that would further ratchet up tar sands development. “I think it’s really important for Obama to realize that his base, the people who supported him, do not want this,” said Judy Dufficy, a former teacher from Chicago. She said she volunteered for Obama in Iowa in 2008.

“I think it’s really important for Obama to realize that his base, the people who supported him, do not want this,” said Judy Dufficy, a Chicago teacher and Obama volunteer.

But the president is under even stronger pressure from the oil industry, business groups and the Canadian government to approve the project. The Canadian government has delegated a well-connected Conservative MP, Rob Merrifield, to build support for the pipeline in Congress. The MP told the Globe and Mail he now spends about half of his working time in Washington.

Yet some pipeline opponents believe they now have a fighting chance—and that they have already won a victory of sorts, just by hanging on. Until late 2011, Obama had been expected to approve the pipeline, with barely any controversy outside a relatively small circle of activists. Most of the big Washington-based environmental groups seemed resigned to the project.

But a relatively unknown activist group, 350.org, adopted the Keystone XL as their cause. Organizers called a series of protests at the White House and in 2011 the arrest of more than 1,000 activists, including high-profile climate scientists and celebrities, brought new scrutiny to the project.

Obama rejected the pipeline early last year because of objections to the proposed route from the state of Nebraska.

Other events began to work in the protesters’ favor. After a year of extreme weather events, crowned by Sandy, climate change returned to the public agenda. Obama adopted climate change as one of the three priorities of his second term. Meanwhile, Canadian newspapers were reporting the fate of the project now hung in the balance.