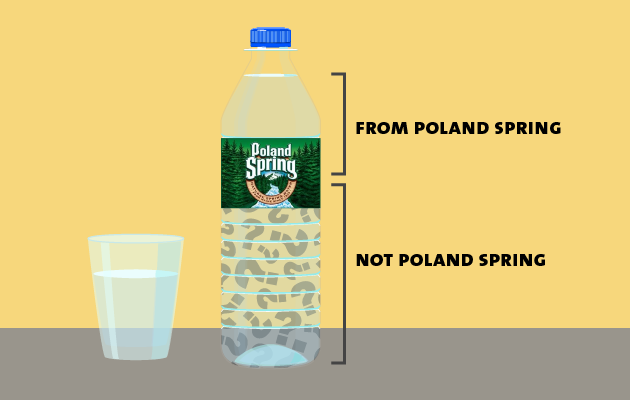 Poland Spring, a bottled-water brand ubiquitous in the Northeast, made a cameo in the Republican response to the president’s State of the Union address last month. In the middle of his speech, Florida Sen. Marco Rubio—usually a model of composure—darted a distressed look at the camera as he lunged off-screen to grab the bottle, popping back into the frame to take a swig. It was a moment that launched a thousand GIFs and a flurry of spoof Twitter accounts. Rubio himself played along, posting a photo of the infamous bottle online.

Following Rubio’s “Watergate” incident, Peter Gleick, the president of the Pacific Institute and author of the book Bottled and Sold: The Story Behind Our Obsession with Bottled Water, took to Twitter to ask Nestlé, owner of the brand, just how much Poland Spring bottled water is actually from the iconic source in Maine. He’d been trying, he says, for years to get an answer to that question. This time, he got one: about a third.

In researching the book, Gleick said he found that most of the companies that he talked to were cagey about their water sources. “They don’t like to advertise that fact, and there’s no legal requirement that they say on their label where the water comes from,” he says. As a result, despite spending $11 billion a year on bottled water, most Americans don’t know much about the origins of these beverages.

How Much Bottled Water Do Americans Drink? 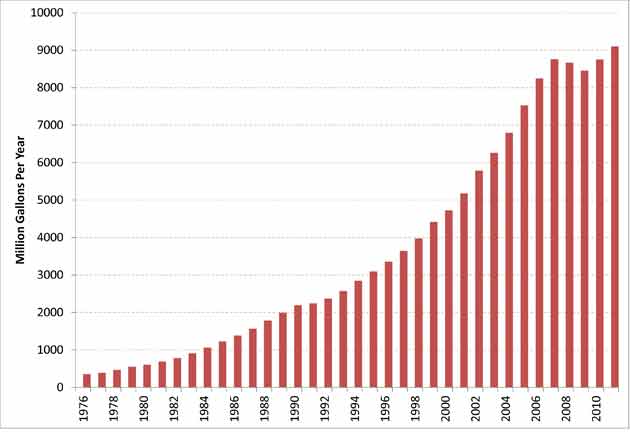 There are a few rules that bottled-water brands have to follow, however. In order to be called “spring water,” according to the EPA, a product has to be either “collected at the point where water flows naturally to the earth’s surface or from a borehole that taps into the underground source.” Unlike the term “spring water,” other terms like “glacier water” or “mountain water” aren’t regulated and “may not indicate that the water is necessarily from a pristine area,” according to the EPA.

Gleick found that only about 55 percent of bottled waters are actual spring water. The other 45 percent of brands is mostly treated tap water. Aquafina, PepsiCo’s bottled water brand, and Dasani, which is Coke’s, are from municipal sources.

How did a plastic water bottle, imported from a military dictatorship thousands of miles away, become the epitome of cool?

Gleick explained in an interview that while many spring water brands started out selling water from a single source, a large portion now draw from multiple springs, even though they don’t often tout that fact. “[The original springs] are insufficient in part because demand has grown to the point where the quantity of water available from these natural springs isn’t enough,” he says. For others, the springs have been overpumped, or the groundwater levels dropped and caused them to dry up.

Back in 2002, a pair of plaintiffs from Connecticut filed a class-action lawsuit against Poland Spring, claiming that the company was falsely advertising its source. The suit alleged that the original Poland Spring dried up in 1967, so it was false advertising to claim that all the water came from there. In the end, Nestlé did not admit to those allegations, but the company agreed to a settlement that included $10 million in discounts for consumers and donations to charity. Jane Lazgin, director of corporate communications at Nestlé Waters North America, said that “as a general rule we don’t comment on legal matters,” but said that the allegations were unfair, as company’s labels reflected the multiple sources of water the company was using at the time of that lawsuit.

Lazgin confirmed the company’s post-Rubio statement that currently a little more than 30 percent of Poland Spring water comes from the area known as Poland Spring (though not that original spring, which has been out of commission for decades). She said that the remaining 70 percent comes from other springs in Maine: Clear Spring, Evergreen Spring, Spruce Spring, Garden Spring, Bradbury Spring, and White Cedar Spring.

I asked how much the percentage of water drawn from the actual Poland Spring has changed over time, but Lazgin couldn’t give an exact figure. “I guess there was a time where it almost all came from Poland Spring, Maine,” Lazgin said. “We purchased the company in 1980 and since that time we have added springs in Maine.” She cited increased demand for the product and sustainability concerns as the reasons the company has diversified the sources over the years.

Nestlé also owns a number of regional brands, including Deer Park, Arrowhead, Ozarka, and Zephyrhills. All those names are tied to specific places: Arrowhead refers to a tourist destination in California, Ozarka is in northeast Texas, and Zephyrhills is a city about 30 miles northeast of Tampa, Florida. I asked Lazgin about what percentage of the water comes from the brands’ namesake places, but she declined to give a specific figure.

How Much of Our Bottled Water Comes From Springs? 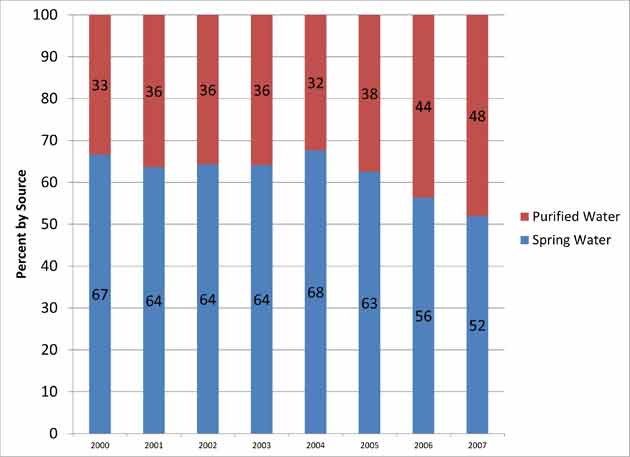 Nestlé’s brands got mediocre grades on transparency in that report. Arrowhead got a C, because its label lists a variety of potential springs in California but no specific location and provides only a phone number and website where customers can seek water quality information. Deer Park got a D, since its label doesn’t provide any water quality information, and it lists a number of potential springs in Maryland, Pennsylvania, Florida, Maine, and Tennessee as potential sources. Ozarka, Zephyrhills, and yes, Poland Spring also got Ds for listing vague information about specific sources and no contact information for consumers seeking water quality data. Lazgin said that, since that report was issued, the company now lists a phone number and website where consumers can find water quality data on all brands.

The report gave Nestlé high marks for its municipally sourced brand Pure Life, which was the only one of the top-selling brands to include its geographic source, treatment method, and contact information for consumers on its label. Many other companies scored far worse. EWG’s “Shelf of Shame” was reserved for brands like Aquafina (for not making water quality test public), and Ralph’s Purified Drinking Water and Neuro Aqua Natural Spring water (both of which had labels that promised information about the water quality online, but had nothing on their actual websites).

EWG argues that the Food and Drug Administration should require all bottled-water companies to disclose this information on the label. “The industry’s refusal to tell consumers everything they deserve to know about their bottled water, such as where the water came from or whether there are contaminants present, is surprising,” Nneka Leiba, senior analyst at EWG and author of the report. As Gleick put it, when it comes to bottled water, “I think most people are completely clueless.”