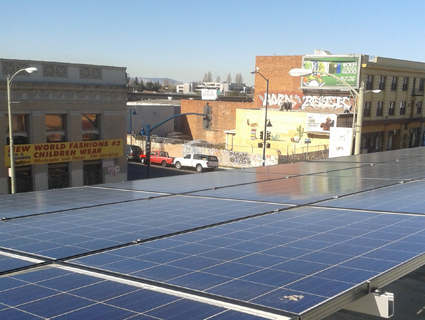 On a sunny February morning, Michele Clark climbed up to the roof of her office in the Fruitvale neighborhood of Oakland, California, to show off 196 black, gleaming solar panels. The installation, completed last December, is providing 47 kilowatts of power for Youth Empowerment Partnership, a group that provides education and job training for at-risk teens and young adults in Oakland.

Clark, the group’s executive director, had dreamed of solar panels on YEP’s headquarters but couldn’t find a way to pay for them. “We have this big sunny roof,” she said, “but we didn’t have the expertise, the connections, or even the thought process of how you would put this together.”

Then Clark connected with Mosaic, an Oakland-based startup company that connects solar-power-seeking businesses and nonprofits with hundreds of investors. Soon, YEP had brand new solar panels, a $40,000 project paid for by 51 individuals.

Here’s how Mosaic works: Investors contribute a minimum of $25 to a project. Over the next 5 to 10 years—depending on the project—the investors will make that money back, plus interest. The return on the investment ranges from 4.5 to 6.4 percent annually, depending on the project. They can support projects in any state, but right now only accredited investors and people in New York and California can invest in the projects, due to regulatory barriers in other states. In order to qualify, projects must be for organizations that are financially stable, have adequate insurance, and benefit the wider community in some way. Recent projects include affordable housing projects, a convention center, several nonprofits, a grocery store, and a Native American reservation.

Mosaic’s founders want to do for solar energy what Kickstarter has done for bands and independent films, or what Kiva has done for upstart projects in the developing world. But Mosaic’s model goes beyond most other crowdsourcing sites, by not only allowing supporters to invest in the solar project but also make a profit doing so.

Billy Parish, Mosaic’s cofounder and president, describes his company’s goal as “getting millions of people tangibly invested in building the clean energy future.” Before Mosaic, Parish, a wiry 31-year-old, spent years as a youth climate advocate and organizer, and was one of the founders of the Energy Action Coalition.

Parish points to polls showing that 89 percent of Americans support the development and use of solar power. But there are still only 300,000 solar power systems installed around the US, generating 0.1 percent of all electricity. That’s because most businesses can’t afford solar panels on their own, and major banks have not shown a tremendous amount of interest in funding relatively small solar projects.

“It’s substantially at this point a deployment problem,” said Parish. “The biggest thing you need is money to make those projects happen.”

So far Mosaic has raised more than $1 million for 12 different projects—fully funding all of them within just a few days of opening them up to investors. One of the appeals to this kind of investing, as Mosaic pitches it, is that contributors can actually see their money at work—very different from the convoluted financial products offered on Wall Street.

Initially, Mosaic worked on a philanthropic model, where people donated a sum of money to a project that they would eventually be repaid. (YEP’s panels were funded this way.) Mosaic moved to this return on investment model in January and lowered the minimum amount of money needed to participate from $100 to $25. They saw an immediate response. It took a year and a half to raise the first $350,000 under the old model, said Lisa Curtis, Mosaic’s communications director, but the new profit-minded model yielded $300,000 in investments in one day. “I think there’s something to be said for enlightened self-interest,” said Curtis.

That enlightened self-interest, they hope, can be harnessed to bring solar energy to community-based organizations like YEP, which will spend the next 10 years paying investors back, but the group is already seeing results. The power bill, which used to run $1,350 a month, is now down to about $150. YEP is also incorporating the panels into its job training program, showing students how the system works and, they hope, inspiring some to seek out jobs in renewable energy.

Curtis hopes that the financial incentive of investing might also inspire people to learn more about climate change and alternative energy. “If we’re able to reach those millions more people who normally wouldn’t care about environmental causes to put their money to work creating clean energy,” said Curtis, “then we will have succeeded.”