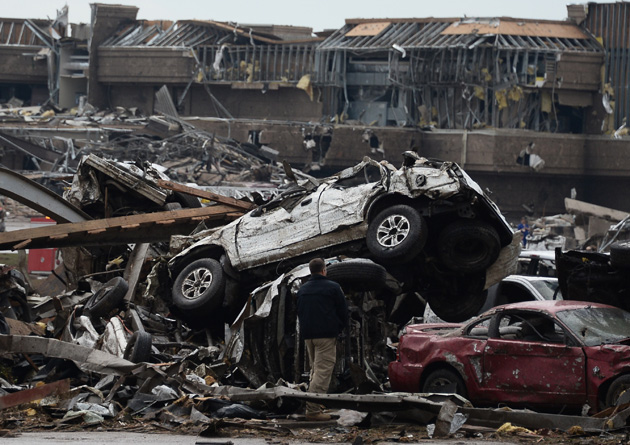 Destroyed buildings and overturned cars left in the wake of the huge tornado that struck Moore, Oklahoma, near Oklahoma City, on May 20, 2013.Gene Blevins/LADailyNewsZuma

The story first appeared on the Guardian website and is reproduced here as part of the Climate Desk collaboration.

Global climate change and politics are linked to each other—for better or worse. No clearer was that the case than when Democratic Sen. Sheldon Whitehouse of Rhode Island gave an impassioned speech on global warming in the aftermath of Monday’s deadly Oklahoma tornado, and the conservative media ripped him. Whitehouse implied that at least part of the blame for the deadly tornado should be laid at the feet of climate change.

Is Whitehouse correct? It’s difficult to assign any one storm’s outcome to the possible effects of global climate change, and the science of tornadoes in particular makes it pretty much impossible to know whether Whitehouse is right.

Let’s start with the basics of what causes a tornado. A piece from my friend (and sometimes co-chatter) Andrew Freedman two years ago sets out the basics well.

First, you need warm, humid air for moisture. The past few days in Moore have featured temperatures in the upper 70s to low 80s, with relative humidity levels regularly hitting between 90 percent and 100 percent and rarely dropping below 70 percent. 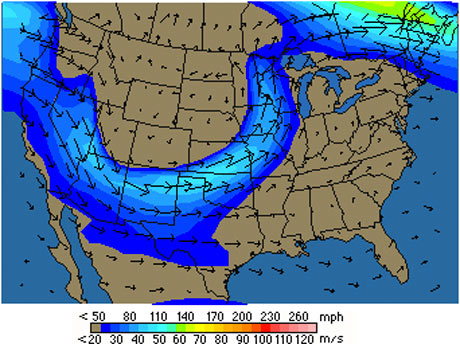 Third, you need strong wind shear (changing wind directions and/or speeds at different heights) to allow for full instability and lift. This mid-level wind shear map from the University of Wisconsin shows that there were 45 to 50 knot winds, right at the top of the scale, over Oklahoma on Monday. 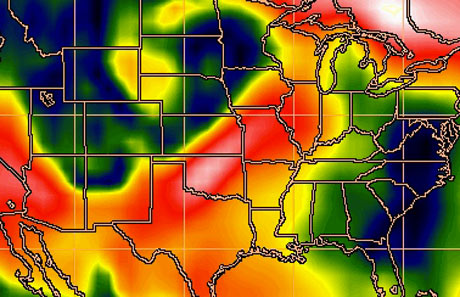 Fourth, you need something to ignite the storm. In this case, a frontal boundary, as seen in this Weather Channel map, draped across central Oklahoma, did the trick. 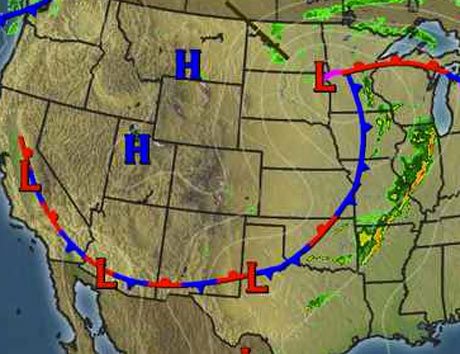 The point is that all the normal ingredients were there that allowed an EF-4 tornado to spawn and strike. (Examination of the storm site may cause an upgrading to EF-5.) It happened in tornado alley, where warm moist air from the Gulf of Mexico often meets dry air from the north and Rocky Mountains for maximum instability. There wasn’t anything shocking about this from a meteorological perspective. It was, as a well-informed friend said, a “classic” look.

The long-term weather question is whether or not we’ll see more or less of these “classic” looks in our changing meteorological environment. It turns out that of all the weather phenomena, from droughts to hurricanes, tornadoes are the most complex to answer from a broader atmospheric trends point of view. The reason is that a warming world affects the factors that lead to tornadoes in different ways.

Climate change is supposed, among other things, to bring warmer and moister air to Earth. That, of course, would lead to more severe thunderstorms and probably more tornadoes. The issue is that global warming is also forecast to bring about less wind shear. This would allow hurricanes to form more easily, but it also would make it much harder for tornadoes to get the full about lift and instability that allow for your usual thunderstorm to grow in height and become a fully fledged tornado. Statistics over the past 50 years bear this out, as we’ve seen warmer and more moist air as well as less wind shear.

Meteorological studies differ on whether or not the warmer and moister air can overcome a lack of wind shear in creating more tornadoes in the far future. In the immediate past, the jet stream, possibly because of climate change, has been quite volatile. Some years it has dug south to allow maximum tornado activity in the middle of the country, while other years it has stayed to the north.

Although tornado reporting has in prior decades been not as reliable as today because of a lack of equipment and manpower, it’s still not by accident that the six least active and four most active tornado seasons have been felt over the past decade. Another statistic that points to the irregular patterns is that the three earliest and four latest starts to the tornado season have all occurred in the past 15 years.

Basically, we’ve had this push and pull in recent history. Some years the number of tornadoes is quite high, and some years it is quite low. We’re not seeing “average” seasons as much any more, though the average of the extremes has led to no meaningful change to the average number of tornadoes per year. Expect this variation to continue into the future as less wind shear and warmer moister air fight it out.

The overall result could very well be fewer days of tornadoes per Harold Brooks of the National Storm Center, but more and stronger tornadoes when they do occur. Nothing about the tornado in Moore, Oklahoma, or tornadoes over the past few decades break with this theory.

None of it proves or disproves Whitehouse’s beliefs, either. Indeed, we’ll never know whether larger global warming factors were at play in Monday’s storms. All we can do at this moment is react to them and give the people of Oklahoma all the help they need.