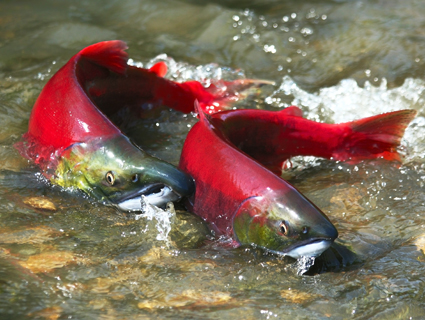 Drilling in the Arctic National Wildlife Refuge is up there, as is climate change. But if you ask people who live in the state, many will tell you that Pebble Mine—a proposed open-pit copper and gold mine that would be as much as two miles long, a mile and a half wide, and 1,700 feet deep—is their biggest environmental concern. It’s also one that the Obama administration Environmental Protection Agency could actually stop.

If built, Pebble Mine would be the largest mine of its type in North America. It would sit at the headwaters of the Nushagak and Kvichak rivers, which feed into the Bristol Bay, producing as much as 11 billion tons of toxic mine waste over a span of decades. The waste would be stored in earthen dams near the site. In its latest report on the potential project, the EPA found that the footprint of the mine could destroy as much as 90 miles of streams and 4,800 acres of wetlands—and that’s just from habitat destruction. It doesn’t include the impacts of leakage from tailing ponds or other accidents. (Mother Jones covered the potential impact of the massive project back in 2006.)

After a decade of talking about building Pebble, the company behind the plan has still only applied to the state for groundwater and surface water permits, as well as a dam permit, but not for the permits that would require a federal environmental impact analysis.* The Pebble Partnership—formed by two mining giants, Northern Dynasty Minerals and Anglo American—says it is still conducting geologic and environmental studies. Critics of the project say they’re waiting for an administration that might be more likely to approve it. Three years ago, this still-uncertain fate prompted a group of six Alaska native tribes to ask the EPA to step in and assert “veto authority” over the mine under a provision of the Clean Water Act known as 404(c). The EPA can invoke this provision if it finds that waste disposal from a project would have “unacceptable adverse impact” on waterways, fisheries, or wildlife. Invoking 404(c) is pretty rare, however; the EPA has only done so 13 times since 1972.

In response to the tribes’ petitions, the EPA agreed to complete a watershed assessment, looking at a hypothetical mine similar to Pebble. The latest draft of its study was released on April 26. The EPA’s study found that waste from Pebble could pollute the region’s fisheries, crippling the source of more than half the world’s sockeye salmon, as well as Chinook salmon, rainbow trout, Arctic char, northern pike, and humpback whitefish. The salmon fishery alone was valued at $300 million a year in 2009, generating 11,000 full-time jobs. The EPA’s assessment found that leaching from the mining operations could kill “many or all fish” in the area closest to the site, as well as the aquatic critters that salmon and other fish depend on as food.

“Letting this mine go forward would be the start of a whole cascade of mines and development, which would be in complete conflict with the land, people, and economy of our region.”

The proposed mine has residents of Dillingham—a fishing community 160 miles downstream at the mouth of the Nushagak River—up in arms. Katherine Carscallen, 27, is a third-generation fisherman in the town. She spends her days hauling sockeye on a 32-foot boat. “This entire region is dependent on—and has been living in balance with—salmon for centuries. We have the largest sustainable salmon runs in the country,” she said. “Letting this mine go forward would be the start of a whole cascade of mines and development, which would be in complete conflict with the land, people, and economy of our region.”

When the Natural Resources Defense Council commissioned polling on the mine in 2011, it found that 68 percent of Alaskans opposed developing it. In the area close to the proposed site, public opinion is even more strongly against it, says Rick Halford, a Republican who served as a state senator for 24 years. He retired as Senate president in 2003, and has also mostly retired from his air taxi business, flying small planes across the region. “It has unified people who agree on almost nothing else but the protection against Pebble Mine,” he said.

Alaska is generally a “pro-development state,” Halford says. And during his time in office, he says, he supported many mining projects and had strong support from the industry. He contrasts Pebble to drilling in ANWR, an issue that gets far more attention in the environmental community outside the state. Like many in the state, he thinks there are ways to drill in ANWR safely. But Pebble, he says, poses too much of a risk to the other industries that the state relies on. “It would change western Alaska forever. It would be in large measure, as a complete ecosystem, unrecognizable to the people that live here today.”

Other political leaders in the state have been critical of the EPA for conducting the study before there’s even a formal application to begin the mine. Former Gov. Frank Murkowski wrote an op-ed to this effect earlier this year. His daughter—current US Sen. Lisa Murkowski, also a Republican—has said it’s premature to weigh in either way until the permitting process and environmental studies are complete. She also called the EPA’s assessment “flawed.” The state’s Democratic senator, Mark Begich, has also argued that it would be “preemptive” for the EPA to make a decision at this point.

But many of the people who live closest to the proposed mine site aren’t convinced that Alaska politicians have their best interests in mind. “I don’t have much faith in the state,” said Allanah Hurley, 27, a fisherman and member of the Yup’ik tribe. “They can’t be trusted.”

Hurley believes that the EPA’s latest study demonstrates that it has enough evidence to block the mine from going forward, rather than waiting for still more assessments. “People are getting really tired of having Pebble hanging over our heads.”

Correction: An earlier version of this article incorrectly stated that the Pebble Partnership has not applied for any permits. It has been updated to reflect that it has applied for some state permits.