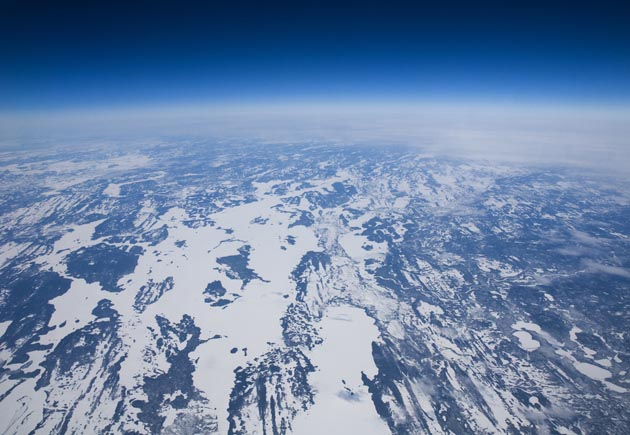 Rapid thawing of the Arctic could trigger a catastrophic “economic timebomb” which would cost trillions of dollars and undermine the global financial system, say a group of economists and polar scientists.

Governments and industry have expected the widespread warming of the Arctic region in the past 20 years to be an economic boon, allowing the exploitation of new gas and oilfields and enabling shipping to travel faster between Europe and Asia. But the release of a single giant “pulse” of methane from thawing Arctic permafrost beneath the East Siberian sea “could come with a $60 trillion global price tag,” according to the researchers who have for the first time quantified the effects on the global economy.

Even the slow emission of a much smaller proportion of the vast quantities of methane locked up in the Arctic permafrost and offshore waters could trigger catastrophic climate change and “steep” economic losses, they say.

The Arctic sea ice, which largely melts and reforms each year, is declining at an unprecedented rate. In 2012, it collapsed to under 3.5 million square kilometers by mid-September, just 40 percent of its usual extent in the 1970s. Because the ice is also losing its thickness, some scientists expect the Arctic ocean to be largely free of summer ice by 2020.

The growing fear is that as the ice retreats, the warming of the sea water will allow offshore permafrost to release ever greater quantities of methane. A giant reservoir of the greenhouse gas, in the form of gas hydrates on the East Siberian Arctic Shelf (ESAS), could be emitted, either slowly over 50 years or catastrophically fast over a shorter time frame, say the researchers.

The ramifications of vanishing ice will also be felt far from the poles, they say because the region is pivotal to the functioning of Earth systems, such as oceans and climate. “The imminent disappearance of the summer sea ice in the Arctic will have enormous implications for both the acceleration of climate change, and the release of methane from off-shore waters which are now able to warm up in the summer,” said Prof Peter Wadhams, head of the Polar ocean physics group at Cambridge University and one of the authors of the paper published in the journal Nature.

“This massive methane boost will have major implications for global economies and societies. Much of those costs would be borne by developing countries in the form of extreme weather, flooding and impacts on health and agricultural production,” he said.

According to the authors, who using the Stern review, calculated that 80 percent of the extra impacts by value will occur in the poorer economies of Africa, Asia, and South America. “Inundation of low-lying areas, extreme heat stress, droughts and storms are all magnified by the extra methane emissions,” the authors write. They argue that global economic bodies have not taken into account the risks of rapid ice melt and that the only economic downside to the warming of the Arctic they have identified so far has been the possible risk of oil spills.

But, they say, economists are missing the big picture. “Neither the World Economic Forum nor the International Monetary Fund currently recognize the economic danger of Arctic change. [They must] pay much more attention to this invisible time-bomb. The impacts of just one [giant “pulse” of methane] approaches the $70 trillion value of the world economy in 2012,” said Prof Gail Whiteman, at the Rotterdam School of Management, and another author.

The Nature report comes as global shipping companies prepare to send a record number of vessels across the north of Russia later in 2013, slashing miles traveled between Asia and Europe by over 35 percent and cutting costs up to 40 percent.

According to Russian authorities, 218 ships from Korea, China, Japan, Norway, Germany, and elsewhere have so far applied for permission to follow the “Northern sea route” (NSR) this year. This route uses the Bering Strait between Siberia and Alaska and is only open for a few months each year with an icebreaker.

But following 2012’s record collapse of the Arctic sea ice, shipping companies are gaining confidence to use the route. In 2012, only 46 ships sailed its entire length from the Atlantic to Pacific oceans and in 2011 only four. The route can save even medium-sized bulk carrier 10-15 days and hundreds of tons of bunker fuel on a journey between northern Norway and China.