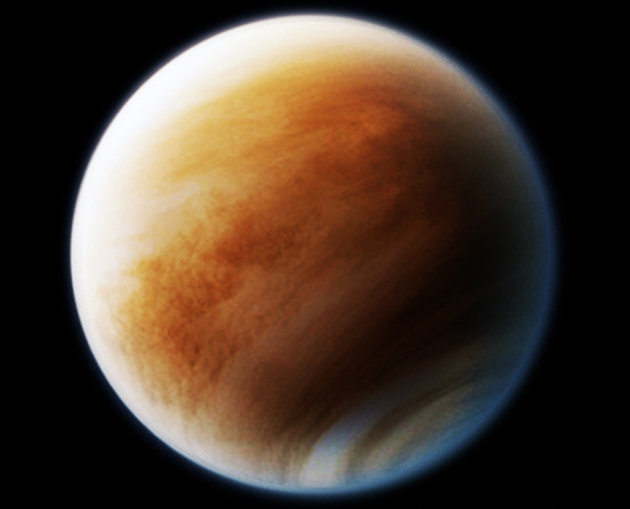 How will the world end? A giant meteor? Zombie apocalypse? Death Star target practice!? One scientist thinks our planet’s death knell is going to be climate change, on an epic, terrifying scale…but, fortunately, not the kind we need to worry about.

The “runaway greenhouse”—which is thought to have happened on Venus in the past—is basically a climate change worst-case scenario: We reach a critical point where the atmosphere is so thick with greenhouse gases that no sunlight can escape back into space, the planet heats uncontrollably, the oceans evaporate completely, and things get, well, pretty uncomfortable, to put it mildly.

“Everything is really quite dead at that point,” Colin Goldblatt, a planetary scientist at Canada’s University of Victoria, says in a chipper English accent. Goldblatt has been working to understand whether a runaway greenhouse could ever happen on Earth. Scientists have long believed that even with extreme greenhouse gas concentrations, our sun simply doesn’t heat the planet enough to trigger this effect. But using a series of custom computer programs that model incoming sunlight, greenhouse gas concentration, radiation absorbed by water vapor, and a host of other physical factors, Goldblatt has revised that threshold down, and in a paper published today in Nature Geoscience says that a runaway greenhouse could kick off with the amount of sunlight we get today.

“What we’re seeing now is that if you pump the atmosphere full of carbon dioxide, you could make the planet so hot it would never be habitable again,” he says. Taken to its conclusion, he explains, the runaway greenhouse would produce a new atmosphere with global temperatures around 2,420 degrees Fahrenheit, which would make even the Northeast heat wave of the last couple weeks feel like a vacation into a meat freezer.

So is it time to forget about rising sea levels and start to look for a new planet to inhabit before ours boils into the next Venus? Not quite. Goldblatt expects this kind of transformation to take place in about a billion years, regardless of human activity. The level of atmospheric carbon dioxide needed to tip the scales—about 30,000 parts per million, according to Goldblatt—is far beyond what humans are capable of contributing. Indeed, that’s about 10 times what CO2 levels would be even if we quickly burned through all the remaining fossil fuels. (Right now we’re at about 400 ppm, which is already bad.)

“There’s no evidence that human action could cause this,” Goldblatt says.

In other words, we’re not going to see this kind of extreme climate change no matter how obstinate Congress is about taking even the most basic climate action. Still, Goldblatt is convinced that this type of runaway greenhouse is how Earth (at least as we know it) will eventually bite the dust; the sun’s rays get stronger over geologic time, meaning the required greenhouse gas threshold will get lower. Eventually, enough water will evaporate and clog the atmosphere so that incoming sunlight won’t be able to escape back to space. And then?

“This is how the world will end,” he predicts.

The fact that humans aren’t likely to be around to see the runaway greenhouse doesn’t mean Goldblatt’s findings are fully esoteric. He insists that while popular debate around climate change tends to focus on predictions for the next hundred years or so, getting a full picture of how the climate works means taking the long view…a much longer view.

“One hundred years is like watching two or three frames of a movie,” he says. “If we look at a billion-year timescale, we get to see the whole movie.”