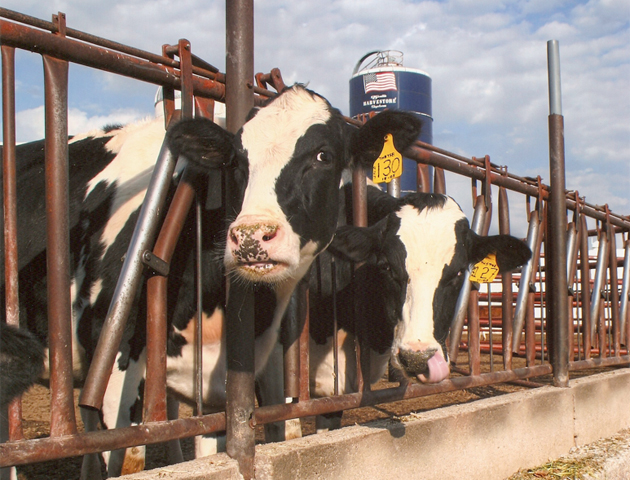 This story first appeared in Slate and is reproduced here as part of the Climate Desk collaboration.

If it isn’t torrential downpours, then it’s too dry. If there’s one thing US farmers can count on, it’s bad weather, and perhaps as a result, many of them don’t think humanity is to blame for the long-term shifts in weather patterns known as climate change. But even though agriculture is a major contributor to global warming, it may not matter whether farmers believe in the environmental problem.

Take, as an example of skepticism, Iowa corn farmer Dave Miller, whose day job is as an economist for the Iowa Farm Bureau. As Miller is happy to explain, it’s not that farmers in Iowa don’t think climate change is happening; it’s that they think it’s always been happening and therefore is unlikely to have much to do with whatever us humans get up to down at ground level. Or, as the National Farm Bureau’s spokesman Mace Thornton puts it: “We’re not convinced that the climate change we’re seeing is anthropogenic in origin. We don’t think the science is there to show that in a convincing way.” (Given the basic physics of CO2 capturing heat that have been known for more than a century and the ever-larger amounts of CO2 put into the atmosphere by human activity, it’s not clear what “science” he’s holding out for.) The numbers back that up: When Iowa State University sociologists polled nearly 5,000 Corn Belt farmers on climate change, 66 percent believed climate change is occurring, but only 41 percent believed humans bore any part of the blame for global warming.

It’s not just the Corn Belt: Farmers across the country remain skeptical about climate change. When asked about it, they tell me about Mount Pinatubo and weird weather in the 1980s, when many of today’s most established farmers were getting their starts. But mostly I hear about cycles in the weather, like the El Niño–La Niña cycle that drives big changes in North American weather. Maybe it’s because farmers are uniquely exposed to bad weather, whether too hot or too cold. Almost any type of weather hurts some crop; the cereals want more rain, but the sweet potatoes like it hot and dry.

Year-to-year variability in the weather dwarfs any impact from a long-term shift in the climate. Consider this: A farmer in Iowa might deal with a 10-degree-Fahrenheit shift in average temperatures from year to year, so why worry about a 3- or even 4-degree shift over 100 years? As the old saying goes: If you don’t like the weather, wait five minutes and it will change.

The long-term prediction for the Corn Belt in Iowa says that the weather will get hotter and drier—much like western Kansas is currently. Yet, over the decades of Miller’s farming career, conditions have been increasingly wet. “If I had done what climate alarmists had said to do, I would have done exactly the wrong thing for 20 of the last 25 years,” Miller says.

Miller doesn’t speak for all farmers, of course, and there are few less monolithic constituencies. This is a group whose holdings range from a small farm in the Northeast following biodynamic principles to big agricultural outfits that count farmed land in square miles, not acres. A fifth-generation wheat farmer in Oregon, like Kevin McCullough, might say, “I think it’s just normal swings in the weather.” But an organic farmer in upstate New York who is the first in recent family history to work the land would say, “There is a scientific consensus that there is a change of climate even in light of the fluctuations that naturally occur.”

The latter is my brother, Tim Biello, and part of why he got into farming in the first place was to do something hands-on about climate change. He wanted to farm with less fossil fuel and fertilizers by working with horses and to use locally available resources to provide food for his neighbors. But he also sympathizes with his big farming peers: “People who have to work for a living and make hard choices about using this or that feel like they are up against the wall when other people, who maybe are removed from work like farming, say this is good or bad.”

Tim is not a random sample, of course. But big farmers certainly aren’t skeptical about all science, particularly the kind of science that makes them money by improving yields. “Last year’s drought was in many places as deep as it was in 1933, and yet we didn’t see too many stories of blowing dirt storms,” like in the “dirty ’30s,” notes former North Dakota farmer Robert Johnson, now head of the National Farmers Union. Breeding and genetic modification have brought crops resistant to drought and flood, as well as insect pests. Also important are better tilling practices, such as leaving a cover crop or stubble to hold down the soil, which helped the dirt stay in place. Even in the depths of the 2012 droughts, the United States delivered an abundant harvest.

But the biggest change delivered by science to farming in the past century is the one my brother is working to reverse: the advent of fossil-fuel-powered machinery and fertilizer wrested from the air by chemistry. That, along with cutting down forests to make room for farms around the world, makes agriculture the second-largest cause of the greenhouse gas emissions changing the climate. There’s methane from massive meat farms and manure lagoons. There’s nitrous oxide—yes, the stuff used at the dentist’s office—seeping out of the soil thanks to all that nitrogen fertilizer, and it’s no laughing matter since N2O is nearly 300 times more powerful as a greenhouse gas than CO2 over a century.

Few would have to change their livelihoods as radically as American farmers if efforts to combat climate change became more serious. Maybe skepticism also flourishes because farmers tend to be more conservative, and denying climate change falls under the same political umbrella as, say, gun ownership. (According to Robert Carlson, who leads the World Farmers Organization, farmers in other countries are more likely to believe in climate change, and many feel they are already facing new weather extremes.)

But even if American farmers don’t believe in climate change, there are reasons for them to behave as if they do. The Agriculture Department has begun incorporating climate change into its projections and outreach, such as encouraging no-till practices where applicable. Oregon wheat farmer McCullough is following their advice to reduce tillage, which helps keep the soil from blowing away like it used to do in his forefathers’ time, burying the farmhouse in silt that had to be shoveled out. He can now skip the three or four tilling passes in his tractor in favor of clearing a field with herbicides and then using an air drill that injects the wheat seed and fertilizer together. “It’s more fuel efficient,” he says. Plus, the USDA also provides financial and technical assistance to those who adopt the new practices. “It’s cheaper to farm that way, and you still get the same type of crop, if not a bit better.”

The key to feeding 7 billion people in a post-climate-change world will be diversity of crops, which will help ensure resilience. To take the example of the farm my brother works, a dry year might see a better crop of sweet potatoes while a wet year promotes the growth of cereal crops. Weather is always changeable and unpredictable in the long term, which means a farmer must take good care of the soil so that the soil can take good care of the farmer when the weather turns challenging.

In other words, many American farmers—even those who would question whether climate change is man-made—are already doing exactly what efforts to combat climate change would require: precision agriculture to cut back on fossil fuel use, low or no-till farming, cover crops, biodigesters for animal waste, and the like. The key to reaching farmers is bringing them practices that improve their farms. “If you can help me deal with weather variability,” Miller says, “I can probably adapt to climate variability.”

“You’ve got so much to do anyway, trying to figure out rotations and moving animals and crops through and taking good care of your land and making enough money,” says my brother. “It’s unclear what the point of talking about climate change would be.” Or as I would put it: If many farmers are doing the right thing anyway, does it matter why?

This article arises from Future Tense, a collaboration among Arizona State University, the New America Foundation, and Slate. Future Tense explores the ways emerging technologies affect society, policy, and culture. In July, Future Tense will be publishing a series of pieces on agriculture and climate change.