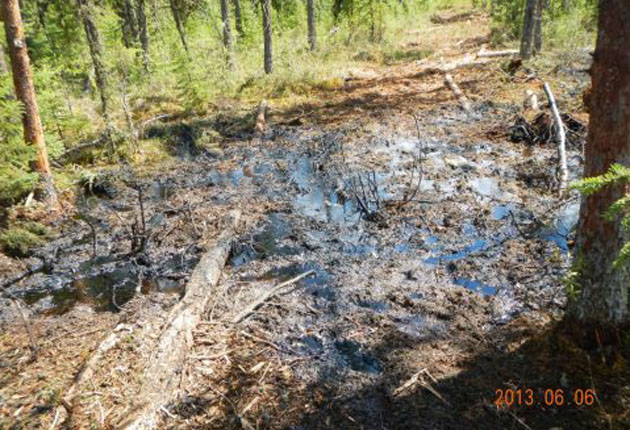 A Canadian energy company said on Wednesday that a 10-week-old series of tar sands leaks in Alberta had slowed. But the company, Canadian Natural Resources Ltd., acknowledged that it still doesn’t have a way to stop the spill. Its plan? Wait it out.

The announcement came after Canadian regulators said Monday that the leaks were ongoing, stating that “[t]here is no control on this incident.” The first leaks were reported on May 20, with two more appearing in mid and late June.

On Wednesday morning, the company said in a conference call that it had identified a few older, inactive wells—one of which dates back to 1997—as probable culprits. At least one of the suspect wells were drilled by a prior operator, the company said. When a well casing failed, according to the company, oil started seeping out through the surrounding ground, eventually impacting a 50-acre swath. Pictures from the site show standing pools of oil, dead wildlife, and trees covered with thick, black sludge. According to figures released by the company, some 6,300 barrels of bitumen has been collected from the site so far and several dozen animals have been killed. The company says that the leaks have slowed to less than 20 barrels a day but that oil will continue to seep to the surface for some time.

The tar sands at the Cold Lake site are too deep to be mined, so the company uses a method called Cyclic Steam Stimulation, in which millions of gallons of steam are injected into the ground to heat and loosen the heavy tar, so it can be pumped back out. The process involves dozens of wells dotted across the site. Wednesday morning, the company said that bitumen—the heavy tar that can be processed into oil—migrated up from an old, compromised wellbore, eventually bubbling up at four different sites. According to the company, it’s similar to a 2009 incident at the same site, when the casing of a well failed and bitumen started seeping to the surface. After that, Canadian Natural changed its standards for well construction, but it didn’t address older wells, like the ones responsible for the current spill.

But knowing what went wrong doesn’t really change anything. According to both the company and Cara Tobin, a spokesperson for the Alberta Energy Regulator, the agency that oversees tar sands extraction, all they can do is wait until the bitumen moving underground has run its course. “It’s going to be an extended release of bitumen to the surface, until all the pressure underground dissipates,” said Tobin. “There is a lot of detailed work that needs to be done to figure out what’s going on underground.”

On the conference call Wednesday, the company promised that it is working to “minimize the impact to the environment, and [is] taking proactive measures to prevent this type of accident in the future.” It claimed that it expects “little to no additional environmental damage” from the continued oil leaks. According to the company, in over 30 years of CSS extraction at the site, there have been only “a few bitumen emulsion seepages to surface.”

The company said it is facing an estimated $40 million cleanup cost, with another $20 million needed to investigate the incident and for new monitoring equipment.