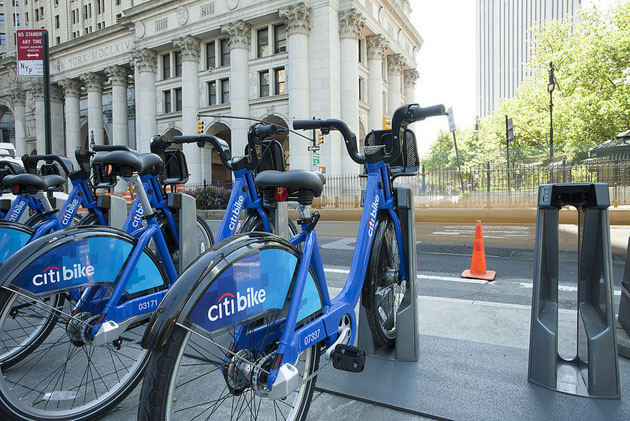 New York City’s politics can seem bizarre, and even more so when it comes to the environment. For the last 12 years, New York’s mayor has been a self-funding billionaire who has transcended his Republican roots to end up left of the national Democratic Party on social issues such as gun control. Once a member of a party that seems intent on denying the reality of human-caused climate change, the now independent Mike Bloomberg is one of the most outspoken and aggressive crusaders against it.

Perhaps Bloomberg’s most controversial progressive reforms came in the realm transportation and public health. He sought to clean the air and citizens’ lungs through smoking bans and planting trees; he tried to ban giant, sugar-laced sodas, and when that failed, ran an advertising blitz against soft drink companies; and he encouraged New Yorkers to get out of their cars by pushing a congestion-pricing plan, creating pedestrian plazas, and expanding bike lanes—creating some 450 miles of them during his three terms.

The Democrats vying to succeed Bloomberg, meanwhile, have often landed to Bloomberg’s right on transportation policy in the past. New York City Public Advocate Bill de Blasio, who says he is “an unapologetic progressive alternative to the Bloomberg era,” once balked at Bloomberg’s plan to charge people who drove cars into downtown Manhattan. Bill Thompson, the former city comptroller, criticized Bloomberg from the left in general, but he ran on a car-oriented transportation platform.

Such is the strange world of New York City, where many wealthy Manhattanites such as Bloomberg support gay rights and bikeshares while pushing heavy-handed (and some say racist) police tactics and backing Wall Street, and some liberal populists defend the prerogatives of the more car-dependent outer-borough middle class.

Following the city’s primary election yesterday, de Blasio is the likely Democratic mayoral nominee, though there is a chance there will be a runoff. (As of this writing, with 98 percent of precincts reporting, de Blasio is just barely over the 40 percent he needs to avoid a runoff with Thompson, who won 26 percent of the vote.) De Blasio would be the prohibitive favorite in a runoff, and the Democratic nominee is virtually guaranteed to win the general election, given Democrats’ 6-1 registration advantage over Republicans. The circumstances that have elected Republicans in the past—high crime, a self-funding candidate, and the attacks of September 11—do not apply this year.

Whoever lands in the mayor’s office next has big shoes to fill when it comes to combating climate change. Bloomberg has been one of the country’s—and the world’s—most visionary politicians when it comes to slowing climate change and mitigating its effects. Bloomberg’s comprehensive plan, called PlaNYC 2030, aims to build a greener metropolis and includes improved energy efficiency standards for buildings, transit-oriented development of new housing, and claims credit for a 13 percent reduction in the city’s greenhouse gas emissions below 2005 levels. In July, Bloomberg announced a plan to spend $20 billion on floodgates and other defenses against the rising tides.

De Blasio gives Bloomberg high marks for these policies and pledges to continue them. During the campaign, he praised Bloomberg’s vision, but cautioned that the city must address the specific needs of low-income residents who suffered the worst effects of Sandy. (De Blasio’s campaign message was a critique of racial and socioeconomic inequality and injustice during the Bloomberg years: He opposed the excessive use of police tactics such as “stop and frisk,” and bemoaned the lack of affordable housing and consequent loss of diversity.)

But de Blasio’s record on transportation has at times been reactionary: He opposed congestion pricing and criticized the construction of a high-profile bike lane in his own neighborhood. Complete streets advocates hoped that, as public advocate, he would promote alternative transportation. He largely disappointed them. As Streets Blog notes, de Blasio “professed skepticism about street transformations like the proposed 34th Street busway, the pedestrianization of Times Square, and protected bike lanes.”

But it turns out that running for mayor as the most progressive Democrat requires forward-thinking policies on transportation and urban planning. De Blasio hails from the famously crunchy, liberal bastion of Park Slope, Brooklyn. While his city council district had included more conservative Orthodox Jewish areas of central Brooklyn, a fact that may have guided his past pro-car stances, de Blasio is now running citywide. His constituency draws heavily from young urban professionals who are famously fond of their bicycles, and his policies have shifted accordingly. De Blasio’s campaign policy book contained several progressive transportation proposals:

One area where de Blasio has been consistent, and strongly pro-environment even though it is rarely thought of as an environmental issue, is real estate development. De Blasio has supported allowing developers to build taller buildings in centrally located areas by increasing the density allowed in the zoning code. Some political reporters and simple-minded critics see this as a contradiction with his posture as a champion of the middle-class and affordable housing. But as Matthew Yglesias explained in Slate, increasing supply of housing should reduce its price.

But this is an environmental issue as much as an economic one. Tall apartment buildings are also more energy efficient than detached single-family homes. And de Blasio says he’ll work to focus new housing and high-density development near transit hubs. That means increasing the number of New York City residents who can rely on mass transit instead of driving.

While the election is still undecided, one thing is clear: Climate change awareness and smart growth will live in New York well beyond Bloomberg’s tenure. No major candidate ran on a platform of reversing Bloomberg’s climate or transportation policies. Republican nominee Joe Lhota has suggested eliminating some bike lanes, but he did not broadly condemn Bloomberg’s record on transportation. While Thompson did not propose major expansions of Bloomberg’s complete streets agenda, he reversed the position of his 2009 campaign and endorsed keeping the bike lanes, possibly even adding some, and he called for mass transit expansions. De Blasio shifted even more than Thompson, and complete streets advocates are now an essential part of his coalition.

Just as banning smoking in bars or allowing gays to marry were once controversial and are now subjects of bipartisan agreement in progressive cities, so too is supporting mass transit, biking and walking, increased energy efficiency, and adapting to the effects of climate change. It is not often that environmentalists can feel confident that the arc of history is steadily bending in their direction—just look at how national Republicans have backslid on climate change since 2008—but in New York City, it is.