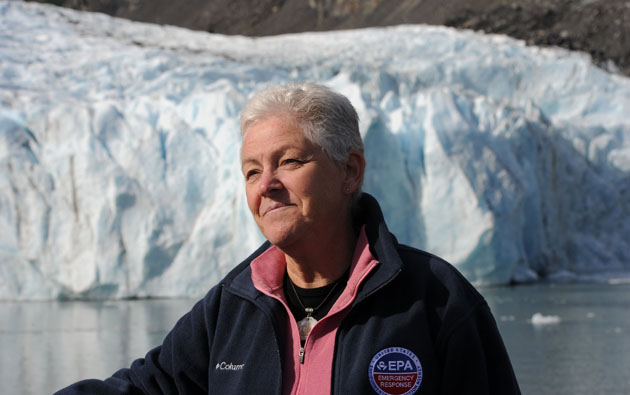 It’s been a long time coming, but, finally, the EPA is going to begin tackling carbon pollution from the world’s single greatest contributor to climate change—the U.S. power sector.

Under draft rules announced on Friday, new coal power plants will have to be a whole lot cleaner than the ones we’ve got today. In fact, thanks also to market conditions, new coal plants might not get built at all. Perhaps most important, the draft rules lay the foundation for a bigger move to cut emissions from already-existing coal-fired power plants, a plan due to be unveiled in June 2014.

In an interview with Grist, EPA Administrator Gina McCarthy said the proposed regulations for new plants are not intended to push coal out of the energy mix. Still, the standards are pretty strict. The EPA had released an earlier version of them in March of last year, then decided to rework them, but this new set of regs still takes a hard line with coal.

The proposal calls for any coal power plants built in the future to emit under 1,100 pounds of CO2 per megawatt-hour—considerably less than coal plants emit today, which is about 1,800 pounds on average. The rules are more stringent than some had expected; observers had been saying that they might come in at 1,300 or 1,400 pounds per megawatt-hour. (The draft rules set a limit for natural-gas plants, too—1,000 pounds for large facilities—but new gas plants already pollute less than that. Some advocates had hoped the EPA would push the gas standard down to 800 pounds per megawatt-hour.)

There’s basically only one way a new coal plant would be able to meet the EPA’s proposed standard: by incorporating a carbon-capture-and-sequestration (CCS) system to keep some CO2 emissions from going into the atmosphere—a pricey and thus far little-used technology. One coal plant with CCS is now under construction in Mississippi and it’s already a billion dollars over budget. Many utilities aren’t bothering with new coal plants at all because natural gas is much cheaper and wind and solar are increasingly affordable as well.

These new rules are the first big piece of the climate plan President Obama laid out in a speech in June, one of the steps the administration can take without cooperation from Congress.

Utility and coal companies and their congressional allies are complaining about the rules for new plants, but what they’re really worried about is the future crackdown on old plants. House Republicans hammered McCarthy over power-plant regs and climate action in general at a hearing on Wednesday. Industry groups are sure to sue over the rules, both these new-plant ones and the existing-plant ones that will be released next year.

But McCarthy is confident that she’s got the law on her side. After a 60-day comment period, her agency will firm up the new-plant rules with an eye toward releasing the final version in about a year.

And, as she told Grist, she’s confident that the president has her back. She explained more about the president’s attitude toward climate change and the new proposed rules in the Q&A that follows—plus a little about her favorite hometown baseball team.

Grist: Of vital national importance, who do you think the Red Sox MVP is this year—Koji or Victorino?

Gina McCarthy: Victorino. He’s going to be the MVP of the World Series.

Grist: Moving on: Is climate change your top priority at EPA?

GM: I would have to say that anything that gets the president’s attention as much as this is always going to be my top priority.

If you also knew me, you’d know that I’ve been working on climate issues for a very long time. So when the president got up and made what I think was one of the most courageous speeches I’ve heard from a president, I was jumping for joy and haven’t gotten off cloud nine since.

Grist: At points during his first term, it seemed like this wasn’t a top priority for people surrounding the president. Do you feel like the president has your back and you have full White House support?

GM: I absolutely do. I don’t have any reason to doubt that. I will tell you that the president looks for an update on the climate activities every other week. He is intimately invested in making sure this happens. He totally understands the threat that climate change poses to our children, and he’s so focused on it. If you remember, even at the end of the speech, I was very touched by the fact that he mentioned that I was hanging out there in the confirmation process.

He’s really done everything he could to make me feel like we share the same goals, we’re going to be invested in the same actions. He knows I’m going to have his back, and I don’t doubt he has mine.

GM: Yeah, I do think that it is realistic. We are very confident that the data is showing that carbon capture and sequestration is technologically feasible and it’s available. It has been successfully demonstrated and there are full-scale both conventional and unconventional coal projects with CCS that are moving forward. So there is no question that there’s continued investment in this technology.

I do not deny that it has costs associated with it. Any first-generation technology will. But we are looking at carbon the same way we look at every pollutant under the Clean Air Act; we look for the new technologies that are available. We recognize that these power plants are going to be around for decades. If coal wants a place in a carbon-constrained future, they have to look at technology like this. And we think that our rule can help stimulate technology, growth, and innovation, bring those costs down, and allow coal a more stable opportunity to continue to be invested in.

Grist: How do you expect these new regulations to affect the national economy?

GM: The president is very interested in taking action on climate now because he understands that climate change is already having a significant impact on the economy. If you look at all the costs associated with the extreme weather events, all the wildfires, all the water challenges that we’re having with droughts, if you look at Hurricane Sandy, these are economic impacts.

Grist: When do you expect to have the final version of these rules for new plants?

GM: The Clean Air Act challenges us to get them done within a year.

GM: That would be about a year from the proposal. But just [proposing the standard] puts companies on notice that if you’re looking to construct a new natural-gas or coal facility, you really need to pay attention to these. This is what they should be designing new facilities toward as soon as this proposal hits the streets.

GM: You’re not wrong. People are not running to build coal facilities because of the price of natural gas, but we do see them being constructed, and there is an interest in fuel diversity, so we took the exercise pretty seriously.

But I think a lot of what you’re going to hear is anxiety about what this means for existing facilities. So at the same time as we’re going out with this proposal [for new plants], we’re also going to be talking about the process of engaging states and utilities, local communities, environmental advocates, the full range of stakeholders, in a series of outreach and engagement efforts, so that when we have to sit down and start writing that proposal [for existing plants], we’re well informed by what’s going on in states and local communities, what kind of flexibilities they might think we should build into any guidance that the agency provides in June.

It’s very different than the process for new facilities. EPA gets to set a standard for new. For the existing, EPA sets guidelines for what we think is appropriate, but then states develop plans that work for them, taking into consideration their specific energy mix. I honestly think this will help us begin to more concretely talk about what’s already happening at the state and local level to reduce carbon emissions in the electricity sector—all the great energy-efficiency programs, the demand reduction that’s happening, why that’s important and supportive of their economies, why that’s saving their consumers money, and making sure that gets highlighted as one of the pluses of addressing carbon.

We don’t just have to do it. We can do it in a way that grows the economy and saves people money. I can’t wait for those stories to be highlighted and come out in the process.

Grist: How can the government draw the best and the brightest when the Republican opposition is doing its best to bring the federal government to a halt, and your agency and others seem primarily to be playing defense? You and your team are often hauled to Congress to testify in front of people who deny climate change is happening. How do you view this challenge?

GM: If you look at what we’ve got done over the last four years [at the EPA], it’s been a remarkable achievement. It has been one of the reasons why I think there’s confidence moving forward to have this agency continue to be bold but be reasonable, to explain ourselves.

I relish going up in front of Congress. People need to understand and hear from experts, they need to hear the science from the scientists, they need to understand that I’ve been doing this work for a long time. I don’t have my own religion that I’m imposing. I’m doing what a democratic process is supposed to do. And I think there are many that want to shortcut democracy by imposing their own rule of law. I’m not doing it. I’m not doing it for the environmental constituents and I’m not doing it for the business constituents.

Grist: One last fun question from a Grist reader: What is your favorite guilty-pleasure food?

On Monday, Grist will be moderating a White House Google+ Hangout with McCarthy and Energy Secretary Ernest Moniz to talk about Obama’s climate plan. Submit your questions here, or tweet with the hashtag #ActOnClimate, and then tune in Monday at 9:15 a.m. PT / 12:15 p.m. ET to watch live video of the Q&A session.