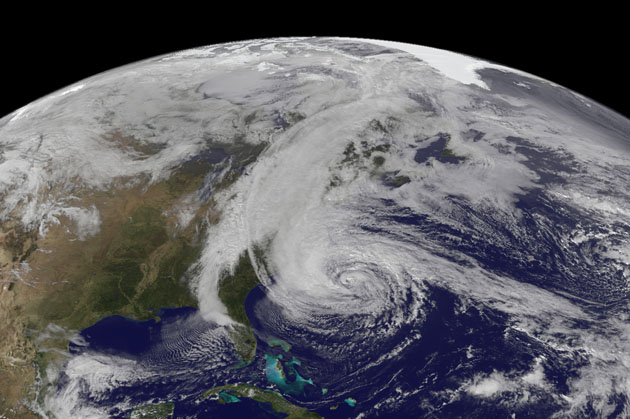 NASAA view of Hurricane Sandy from space on October 28, 2012.

Half of last year’s extreme weather—including the triple-digit temperatures of America’s July heat wave—were due in part to climate change, new research said on Thursday.

The study, edited by scientists from the National Oceanic and Atmospheric Administration and the UK Met Office, detected the fingerprints of climate change on about half of the 12 most extreme weather events of 2012.

The researchers said climate change helped raise the temperatures during the run of 100-degree days in last year’s American heat wave; drove the record loss of Arctic sea ice; and fueled the devastating storm surge of Hurricane Sandy. “The analysis reveals compelling evidence that human caused climate change was a factor contributing to the extreme events,” Thomas Karl, director of the National Climatic Data Center told reporters in a conference call on Thursday.

But the researchers said they found no evidence of climate change on other extreme weather events—especially those involving rainfall, or its absence.

Climate change was not responsible for Britain’s miserable summer last year, which was the rainiest in a century. The researchers also ruled out climate change as a culprit for the Netherlands’ cold spell last year. Neither did they find any connection between climate change and the drought that devastated the United States’ corn belt, or the punishing droughts in Kenya and Somalia.

The findings, produced by 18 different research teams, were published in the Bulletin of the American Meteorological Society.

The researchers looked at extreme weather events around the world, including: drought and heat waves in the United States; flooding from Hurricane Sandy; the retreat of Arctic sea ice; the extremes of European summer and winter; drought in the Iberian peninsula; the cold snap in the Netherlands; drought in eastern Kenya and southern Somalia; floods in northern China; and extreme rain in southwestern Japan, southeastern Australia, and parts of New Zealand.

The study found that heat waves, like the one that scored the American Midwest and Northeast last July, were now four times as likely, because of climate change.

About 35 percent of the record-high temperatures between March and May of last year were due to climate change, it said. The study warned such heat waves were now also up to 12 times more likely to occur, because of climate change.

As the researchers noted on the conference call, for years scientists had balked at declaring climate change the cause of specific weather events.

But advances in research and computer models now make accurate attributions more possible. They also increase the ability to predict the likelihood of such events recurring.