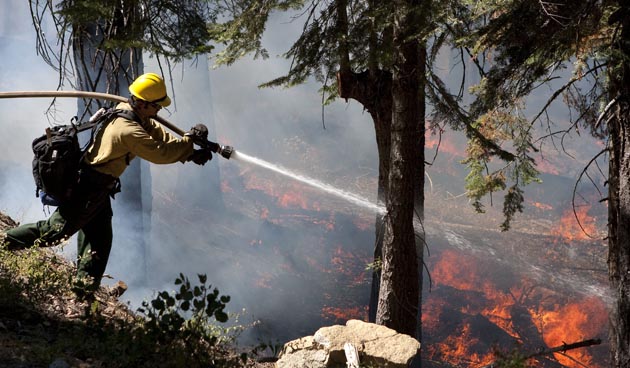 Long-lasting drought has been the force behind several of this year’s American calamities. Hot temperatures and scarce rainfall set the stage for the explosive development of California’s Rim Fire, turned Utah into one big disaster zone, and prolonged the worst drought in Colorado since the 1950s.

These western areas should brace themselves for even more onslaughts of ugly parching, according to a new study that suggests a warmer climate will bake them (as well as many other places) like a Spicy Wing Zing under a 7-Eleven heat lamp.

Wallace Broecker and Aaron Putnam are researchers at Columbia University’s Lamont-Doherty Earth Observatory who have a keen interest in paleoclimatology, or how the climate changes over the course of history. Whereas many of today’s scientists study data from the past century recorded at worldwide monitoring stations, Putnam and Broecker are digging back thousands of years by looking at things like stalagmites, tree rings, and ice cores. What they think they’ve found is a worrying similarity between the modern climate and one that existed 15,000 years ago, when the earth was toasting its glaciers to emerge from an ice age.

Back then, Arctic sea ice was melting so rapidly it set up a temperature imbalance between the northern and southern hemispheres. That caused major transporters of atmospheric moisture—the tropical rain belt and the mid-latitude jet stream—to deviate from their previous positions and move northward for long periods, as if the planet had hitched up two belts made from water. The resulting change in rainfall patterns starved rivers in Brazil into meager streams and reduced Utah’s Lake Bonneville, once the size of Lake Michigan, into a comparable puddle.

When this grand-scale process reversed itself during the Little Ice Age—a not-quite ice age from about 1300 to 1850—severe droughts that popped up in Asia helped take down China’s Ming dynasty and Cambodia’s Khmer civilization, the researchers say.

All this is background for Broecker and Putnam’s assertion that it could all be happening again today. The Arctic’s frozen stocks of H20 are dissolving at a lightning clip, as shown by these visualizations of how much the sea ice has shrunk each year. This is the ice at its tiniest extent in 1984:

The southern hemisphere is not keeping up with the north’s balmy temperament, the researchers say, setting up the possibility for another climate-warping temperature imbalance. Should the wind and rain belts move locations for the long-term future, the blow to humanity would be “huge,” they say. While monsoon-drenched Asia and equatorial Africa would become wetter, a paucity of moisture above the Amazon, the Middle East, and America’s western flank could create desiccated zones susceptible to droughts, crop kills, wildfires, and other yet-to-be-fathomed problems.

They add that the rain might already be migrating north, “as suggested by a number of recent droughts, including in Syria, northern China, western U.S., and northeastern Brazil.” Here’s Broecker talking about what that might mean for the coming generations: