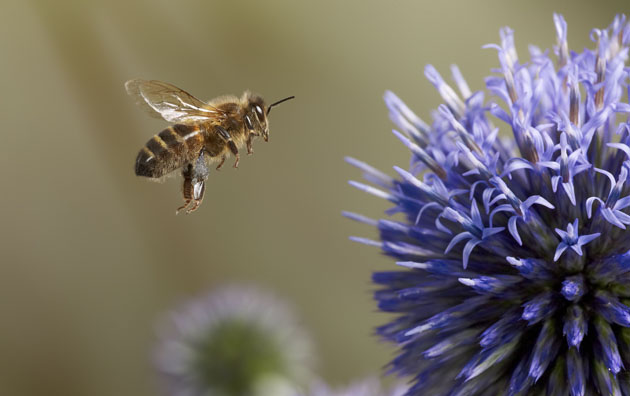 Science has linked breathing car exhaust to all manner of afflictions, from brain damage to heart attacks to chronic asthma in children. But the damaging effects of auto fumes stretch beyond the human realm and into the wild, with honeybees in particular getting so addled by the stuff they no longer can find life-sustaining flowers.

That’s according to researchers at the UK’s University of Southampton who are investigating how diesel exhaust interacts with floral aromas. Bees rely on these zesty odors to locate blossoms, which they mine for nectar and pollen to use as a food source back at the hive. In an ideal environment of green fields and pristine air, bees have little problem tracing the scents to their blooming wellsprings. But in a smoggy urban zone or along highways, car exhaust violently zaps the aromas, changing their chemical composition or even eliminating them completely.

Southampton ecologist Tracey Newman and neuroscientist Guy Poppy (really) arrived at this conclusion after running tests with a yellow-flowered member of the cabbage family, rapeseed. They mixed chemicals found in the scent of the flower with those in diesel exhaust and witnessed a startling transformation: The majority of the floral components either shrunk in volume or disappeared in the span of a minute. They then blew this dirty air into the vicinity of some honeybees, and watched as the insects showed no sign of recognition that it had originally contained flower aromas.

The researchers speculate that the exhaust’s nitrogen compounds, nitric oxide and nitrogen dioxide, are primarily responsible for the annihilation of the flower smells. While they don’t go far into exploring possible connections between burning fossil fuels and the plague of colony collapses wiping out honeybee populations in North America and Europe, they do note that having confused, starving bees does not bode well for humanity.

Here’s Newman explaining why that is:

NOx gases represent some of the most reactive gases produced from diesel combustion and other fossil fuels, but the emissions limits for nitrogen dioxide are regularly exceeded, especially in urban areas…. This could have serious detrimental effects on the number of honeybee colonies and pollination activity.

Honeybee pollination can significantly increase the yield of crops and they are vital to the world’s economy—£430 million a year to the UK alone. However to forage effectively they need to be able to learn and recognize the plants. The results indicate that NOx gases—particularly nitrogen dioxide—may be capable of disrupting the odour recognition process that honeybees rely on for locating floral food resources. Honeybees use the whole range of chemicals found in a floral blend to discriminate between different blends, and the results suggest that some chemicals in a blend may be more important than others.

Bees are thought to aid in agricultural pollination to the tune of billions of dollars each year—$217 billion worldwide, according to an estimate for 2005. If they’re all whacked-out on diesel vapors, it obviously won’t be good for farmers or, farther down the road, even “global-food security,” warn the researchers.