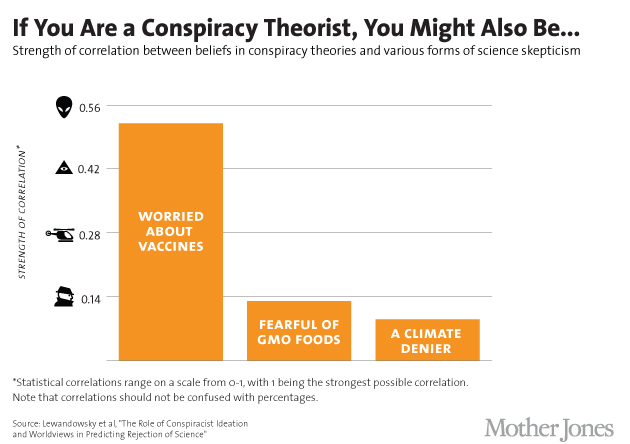 Why do people reject perfectly safe vaccines? It may have something to do with the New World Order....<a href="http://www.shutterstock.com/pic-123756019/stock-photo-boy-in-a-tin-foil-hat.html?src=csl_recent_image-1">Suzanne Tucker</a>/Shutterstock

Do you believe that a covert group called the New World Order is planning to take over the planet and impose a single world government?

Do you think the moon landings were staged in a Hollywood studio?

What about 9/11—do you suspect the US government deliberately allowed the World Trade Center and Pentagon attacks to happen in order to concoct an excuse for war? 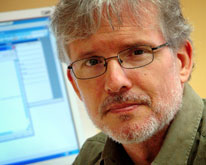 Psychologist Stephan Lewandowsky, who studies conspiracy theories and how they motivate the denial of science.

The new study, by University of Bristol psychologist Stephan Lewandowsky and his colleagues in the journal PLOS ONE, finds links between conspiratorial thinking and all three of these science-skeptic stances. Notably, the relationship was by far the strongest on the vaccine issue. For geeks: the correlation was .52, an impressive relationship for social science. Another way of translating the finding? “People who tend toward conspiratorial thinking are three times more likely to reject vaccinations,” says Lewandowsky. (By contrast, for climate change denial and GMO resistance, the correlation with conspiratorial beliefs was real but much smaller, .09 and .13, respectively.)

The finding may cast a great deal of light on the strange persistence of anti-vaccine views, which have centered on the claim that childhood vaccines are behind an alleged “epidemic” of autism. This assertion has been rejected by scientists. The Centers for Disease Control and Prevention and the Institute of Medicine have both weighed in strongly on the matter; and one chief proponent of the vaccine concerns, Andrew Wakefield, has even seen his original 1998 paper raising concerns about the MMR (measles, mumps, rubella) vaccine retracted by the journal that published it, The Lancet.

Yet vaccine fears have persisted in the face of all scientific refutation (not to mention medical and public health experts saying that the failure to vaccinate is downright dangerous). And if these beliefs are often conspiratorial, that might help explain why. Almost by definition, conspiracy theories are irrefutable; rejections by scientific authorities just become part of the conspiracy. Indeed, several prior analyses of anti-vaccine views, undertaken by analyzing their expression on the web or on YouTube in particular, have found them to be highly conspiratorial in nature.

Lewandowsky’s team conducted the research through an online survey of 1,001 Americans, which asked them a variety of questions about conspiracy theories, and also separate batteries of questions on vaccines, climate change, and genetically modified foods. On vaccines, for instance, survey respondents were asked how much they agree with statements like “The risk of vaccinations to maim and kill children outweighs their health benefits” and “I believe vaccines are a safe and reliable way to help avert the spread of preventable diseases.”

As if the new study won’t provoke enough ire by linking anti-vaccine views to conspiracy theories, Lewandowsky also finds links—albeit much weaker ones—between conspiracy theories and both anti-GMO beliefs and climate change denial. On GMOs, the board of directors of the American Association for the Advancement of Science has stated that “crop improvement by the modern molecular techniques of biotechnology is safe.” Accordingly, Lewandowsky’s survey respondents were asked to react to items like “I believe that because there are so many unknowns, that it is dangerous to manipulate the natural genetic material of plants” and “Genetic modification of food is a safe and reliable technology.”

On climate change, the scientific consensus is strong and enduring—it was just reaffirmed by the leading scientific authority on the matter, the Intergovernmental Panel on Climate Change. To think that the world’s scientists are collectively conning us about this is indeed a conspiracy theory, and Lewandowsky has previously published research drawing this connection. Ironically, that in turn led some climate skeptics to see a conspiracy behind Lewandowsky’s studies, charging that the research had been faked or was a “scam,” that its conclusions were “pre-ordained,” and (most elaborately) that the University of Western Australia (where Lewandowsky used to work), the Australian Research Council, the Australian Broadcasting Corporation, and “possibly even the government” were ultimately pulling the strings.  (The new research reaffirms that prior study, meaning that critics will now need a still more elaborate conspiracy theory.)

The new study also has some fascinating implications for the longstanding battle over who’s worse when it comes to distorting science: The left, or the right. Addressing this issue was a key motivation behind the research, and the basic upshot is that left-wing science denial was nowhere to be found—at least not in the sense that left-wingers reject established science more frequently than right-wingers on issues like GMOs or vaccines. “I chose GM foods and vaccinations based on the intuition in the media that this is a left wing thing,” Lewandowsky explains. “And as it turns out, I didn’t find a lot of evidence for that.”

When it comes to GM foods, Lewandowsky found no association between left-right political orientation and distrust of these foods’ safety in his American sample. When it comes to vaccines, meanwhile, the study found that two separate political factors seemed to be involved in vaccine resistance, leading to a complex stew. “There’s some evidence that progressives are rejecting vaccinations, but equally there is an association between libertarianism and the rejection of vaccinations,” Lewandowsky explains. Lefties presumably do it because they’re anti-corporate, and Big Pharma is involved in the vaccine business; libertarians presumably do it because they’re anti-government, and the anti-vaccine movement has long levied dubious charges that the government (the CDC in particular) has been hiding the truth on this matter.

Politically speaking, the result is kind of a wash. “Overall, there’s very weak evidence for a liberal war on science,” concludes Lewandowsky. By contrast, the rejection of climate science was associated in the study, as it has been constantly in past research, with political conservatism and free-market beliefs. Conservatives today also have less trust in science in general than liberals do. And then, there’s that whole evolution thing.

What are the implications of these results? First, the study suggests that we need to think about science denial in a new way: It isn’t simply driven by ideology. There appears to be an independent factor, conspiratorial thinking, that is neither left-wing nor right-wing, but that does motivate rejection of what scientists say on a diversity of issues. And that makes sense: “Science is based on looking at all the evidence, rather than focusing in on some abnormality, which is what conspiracy theorists do,” says Lewandowsky.

The paper is Lewandowsky et al, “The Role of Conspiracist Ideation and Worldviews in Predicting Rejection of Science,” PLOS ONE, October 2, 2013.

The title of the above chart has been altered for clarity.