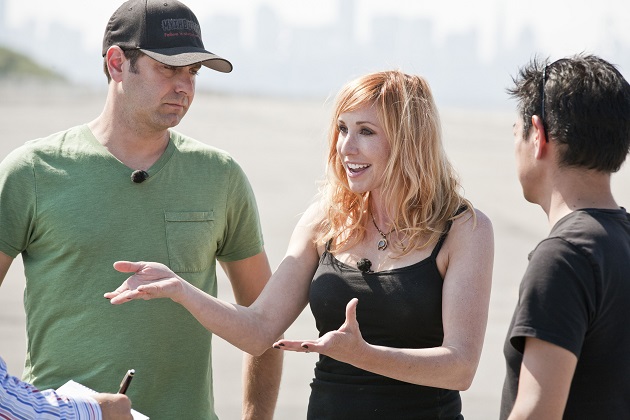 Most expecting women ask their doctors whether it’s okay to eat blue cheese, or have the odd glass of wine, while they’re pregnant. Or maybe whether to stay away from fish, because of the mercury. When she was pregnant with her daughter several years ago, though, MythBusters’ Kari Byron took her maternal Q & A to a whole different level.

“I’d be going to my doctor saying, ‘All right, so, when do I have to stop shooting guns because she has ears?'” recalls Byron on the latest installment of the Inquiring Minds podcast. “And the doctor would say, ‘Hmm, I have never, ever had that question before. I’ll get back to you.’ I come back a little later: ‘How far away do I need to be from an explosion of this much C-4?’ ‘Huh, I’ve never had that question asked. I have no idea, I don’t even know where to refer you right now, I’ll get back to you.'”

As a co-host of arguably the most successful science-based show on television, Byron has developed a reputation as a courageous and fun-loving guide to testing the truth behind so many ideas that we take for granted. Airing on the Discovery Channel since 2003, MythBusters seeks to either validate or bust myths, rumors and folk wisdom—and has managed to find that sweet spot where curiosity meets creativity, and plenty of stuff gets blown up. (The show boasts of over 750 detonations, “and counting.”) “The whole idea behind the show is that we’re not scientists,” says Byron. “It’s not a talking head telling you facts, it’s watching regular Joes experience the problem. And it just happens to be that the best way to explore myth is the scientific method, it’s the perfect narrative.”

In this mix, Byron has a special place: She’s the only female MythBusters co-host in a field, science entertainment, where women are all too often relegated to bit parts. Insofar as MythBusters is one of the few shows on television that increase rather than diminish our intelligence, Byron’s presence as a high-profile female role model promoting critical thinking and making science accessible is vitally important. 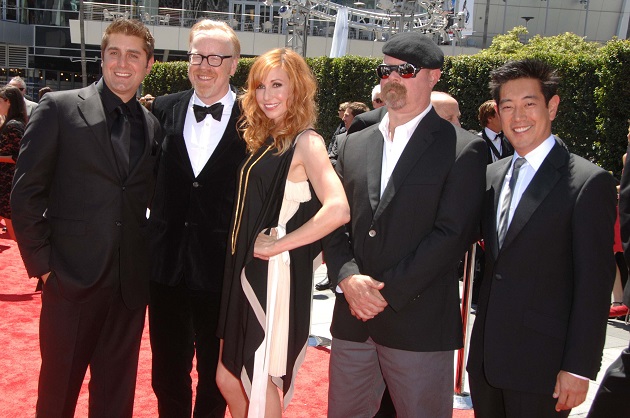 She didn’t start out there: Byron originally wanted to make a living as a sculptor, but found herself working instead as a receptionist at an ad agency. “I was trying to figure out a way to be artistic, but still not be starving, because nobody was actually buying my sculptures,” she laughs. “They were a little dark.” That’s when a tour of MythBusters host Jamie Hyneman’s special effects workshop, M5 Industries, introduced her to a very different use of artistic materials. She begged for an internship and got it. “Not long after, they just pulled me onto the show,” she remembers.

Nowadays Byron is part of the MythBusters’ “Build Team,” a trio that includes herself, model-builder Tory Belleci, and electronics expert Grant Imahara. The Build Team often works separately from the original hosts, Adam Savage and Jamie Hyneman. Here’s a video of Byron and Imahara demonstrating just how loud the show’s detonations can be:

And here’s Byron on a recent myth test. The goal was to determine whether or not humans can outrun a horde of zombies. More specifically, how many zombies must there be in a given area (here, the size of a football field) before a human can no longer elude them, assuming the zombies can only move at about 2 miles per hour? Watch:

Asked about her favorite myths (either busted or proved true), Byron remembers one particularly scary one: Diving with sharks, with and without lights, to try to see if the sharks were drawn to flashlights (as many divers report). “And yes, they were attracted to flashlights,” Byron says. Maybe too much so: The team had to get out of the water on the flashlight dive for safety reasons.

A more recent episode, meanwhile, involved testing out strategies for deterring unwanted animals: from kittens, to snakes, to grizzly bears. When it comes to bears, it turns out cayenne pepper worked great. “The bear didn’t like that at all,” says Byron, “it was sneezing all over the place.” Later, Byron put the bear mace on her keychain for safety, and had it with her on a camping trip with her sister and brother-in-law. “And at one point,” she says, “I had gone to take a nap in the tent with my baby, and I hear my brother in law sort of freaking out. He’s like, ‘Wait, is this, this sunscreen on this keychain, this red stuff, it’s starting to burn!’ He had sprayed it all over his arms and rubbed it in, not realizing it was bear mace pepper spray. And he started running around, screaming, looking for things to pour on it. So, it also works on brother-in-laws.”

Here’s an aftershow of Byron and her co-hosts discussing what they found out about animal-repelling strategies:

Of course, Byron is also interested in—or, worried about—some more socially consequential myths. As a mom, she’s particularly appalled by the myth that vaccines cause autism. “It really frustrates me that things like this get propagated, this sort of pseudoscience, and still to this day get propagated,” she says.

Which gets back to why MythBusters isn’t just about running from zombies or swimming with sharks: It’s about a style of thinking, and a celebration of what we can do with our brains once we set up some reliable guidelines for using them. What’s more, if you combine together critical thinking lessons with actual mass entertainment in the way that MythBusters does, then you start to actually make a difference. The public response that Byron receives demonstrates just that.

“I’ve met so many mothers who were telling me that their girl was interested because I was on the show,” says Byron. “And that really touched me, because when I was 12 years old, I kind of stopped being interested in science. It wasn’t something that could compete with boys and rock stars and MTV. You didn’t have role models. Even on TV, the doctors were all men.”

So now, with MythBusters, with her recent show Head Rush on the Science Channel, and with future projects, Byron says her goal is to “find that 12 year old girl that I was, and keep her interested in science.”

What she can’t do, though, is guess ahead of time, without any investigation, which myths are true and which aren’t. “People think that I just have like the Webster’s of all myth knowledge,” she says.

To listen to the full interview with Kari Byron you can stream below:

This episode of Inquiring Minds, a podcast hosted by neuroscientist and musician Indre Viskontas and best-selling author Chris Mooney, also features a report by Mother Jones’ Brett Brownell on our growing ability to detect extra-solar planets, and a discussion of, yes, the myth that antioxidant vitamins protect against cancer.

To catch future shows right when they are released, subscribe to Inquiring Minds via iTunes or RSS. We are also available on Stitcher and on Swell. You can follow the show on Twitter at @inquiringshow and like us on Facebook. Inquiring Minds was also recently singled out as one of the “Best of 2013” shows on iTunes—you can learn more here.