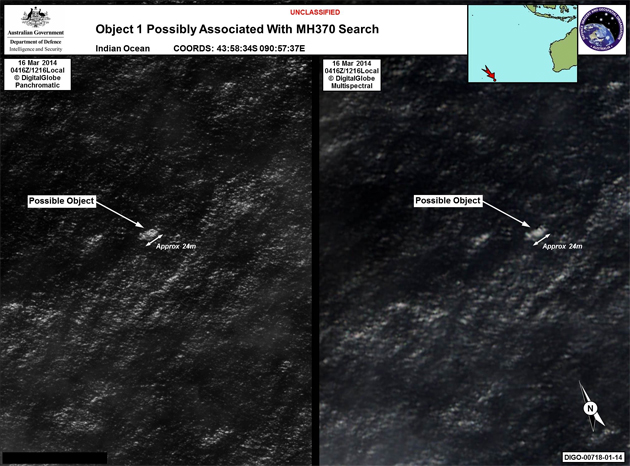 UPDATE: 10:15am, March 24, 2014: Malaysian Prime Minister Najib Razak has announced to a late-night press conference that according to a new data analysis performed by British specialists, Malaysia Airlines flight MH370 ended in the Southern Indian Ocean. Malaysia Airlines confirmed the plane’s fate in text messages sent to relatives of Chinese passengers: “Malaysia Airlines deeply regrets that we have to assume beyond any reasonable doubt that MH370 has been lost and that none of those on board survived… we must now accept all evidence suggests the plane went down in the Southern Indian Ocean.” Read the Prime Minister’s full statement here.

Scientists say man-made climate change has fundamentally altered the currents of the vast, deep oceans where investigators are currently scouring for the missing Malaysian Airlines flight, setting a complex stage for the ongoing search for MH370. If the Boeing 777 did plunge into the ocean somewhere in the vicinity of where the Indian Ocean meets the Southern Ocean, the location where its debris finally ends up, if found at all, may be vastly different from where investigators could have anticipated 30 years ago.

The search of 8,880 square miles of ocean has yet to turn up signs of the missing flight.

Even if the fragments captured in satellite images are identified as being part of the jet, which Malaysian officials say deliberately flew off course on March 8, investigators coordinated by the Australian Maritime Safety Authority will still have an enormous task to locate remaining parts of the plane and its flight recorders. Among the assets deployed in the search—including a multinational array of military and civil naval resources—are data modelers, whose task will be reconciling regional air and water currents with local weather patterns to produce a possible debris field. “Data marker buoys” are being dropped into the ocean to assist in providing “information about water movement to assist in drift modeling,” John Young from the Australian Maritime Safety Authority told a press conference in Canberra on Thursday.

While longer-term climate shifts are unlikely to play into day-to-day search and rescue efforts, these large climate-affected currents—among them the Antarctic Circumpolar Current, the world’s most powerful ocean system—are an essential factor in oceanographers’ understanding of the literal undercurrents of search operations.

According to interviews with three climate scientists who specialize in the region of the world where investigators are focusing their search, the winds of the Southern Indian Ocean bordering the Southern Ocean have been shifting southwards and intensifying over the last 20 to 30 years, in part due to a warming atmosphere and the hole in the ozone layer. Ocean currents are also tightening around Antarctica, shifting whole climate systems towards the South Pole.

“Both the ozone hole and greenhouse gases are working together to change the winds over the Southern Ocean.”

Two currents impact this area of the ocean: the Antarctic Circumpolar Current, which races almost unbridled around the bottom of the world, and the Indian Ocean Gyre, which swirls around the outskirts of the Indian Ocean, including up the west coast of Australia. The potential plane debris spotted via satellite is in “this sort of boundary between the circumpolar current and the gyre; both of those currents are shifting south,” says Steven Rintoul, an expert on the southern oceans with Australia’s foremost scientific research agency, the Commonwealth Scientific and Industrial Research Organisation (CSIRO)?, in Hobart. “And it looks like that’s largely due to human activities, but not just greenhouse gases. Both the ozone hole and greenhouse gases are working together to change the winds over the Southern Ocean.” 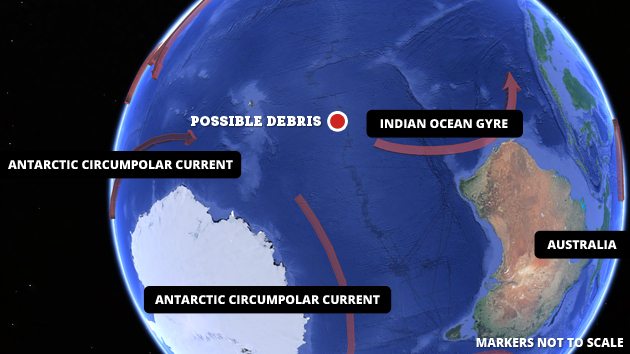 The debris is being searched for in “the boundary between the circumpolar current and the gyre,” says the CSIRO’s Steven Rintoul. (Approximate locations.) Google Earth/NASA

Unlike the current patterns of the Northern Hemisphere oceans, where scientists have a lot more historical data to rely on, this southwards shift was a pattern only first detected by satellite starting in the early 1990s. “Over the 20 years, since 1993, we’ve seen the current shift southward by about half a degree of latitude, or about 30 or 40 miles or so, on average,” Rintoul says. That may not sound like a lot, but it has substantially altered our understanding of the oceans here. Previously, it was thought these mega-currents were locked into the trenches and mountains of the deep sea floor, says Rintoul, in the same way poured molten metal must conform to a mold. “It was a surprise to see them shifting at all. In some regions the shifts are much greater, up to 400 miles.”

As winds and ocean currents have been driven south, there have been alarming side effects, says Rintoul. “We have seen changes in the last few years that even 5 or 10 years ago we would have thought highly unlikely,” he says. The sea is hotter, for example, and less salty: “There’s warming, and freshening of the deep ocean and the surface ocean, shifts in the latitude of the major currents, and changes in the ice driven in part by the wind, and in part by the ocean.”

These shifts are happening in oceans that are vital to understanding our global climate system, says Joellen Russell, an associate professor in biogeochemical dynamics at the University of Arizona who has explored and studied the southern oceans. The ocean currents here are so powerful, because the water column is so deep—between 1.2 to 2.5 miles—and so consistently cold: “It’s the one place that the deep abyssal waters—apart from the North Atlantic—connect to the surface,” she says. “This is where you see the lungs of the ocean working, where you get oxygen in, and you bring up carbon-rich and nutrient rich waters to the surface. It’s what makes it so productive.” The Antarctic Circumpolar Current transports 130 million cubic meters of water per second eastwards. The next most powerful current, the Gulf Stream, carries around 40 million per second, Russell says.

But it’s that very deepness, coldness, and power that allows these oceans to absorb so much of the heat that manmade climate change is generating. “The Southern Ocean takes up something like 70 percent—plus or minus 30 percent—of all the anthropogenic heat that goes under the ocean,” says Russell. “This is one of the few areas of the global ocean that is immediately and definitely playing a role in the temperature on land, because it’s taking up all this anthropogenic heat and carbon. The whole ocean is doing that, but here it’s doing it more than it ought to, which is giving us a moment of grace.”

“This is one of the few areas of the global ocean that is immediately and definitely playing a role in the temperature on land.”

The westerly winds here have increased by about 20 percent over the last 20 years, according to Russell’s 2006 investigation into the trends, messing with the overall system that we rely on for our climate stability—and potentially shortening this so-called “grace” period where the oceans are giving us a helping hand. “It can do loads of things to the climate system,” says Matthew England, joint director of Climate Change Research Centre at the University of New South Wales. “It can decrease the amount of carbon you can get into the oceans…It can also affect the temperatures off the Antarctic ice shelf, which is a real worry.” 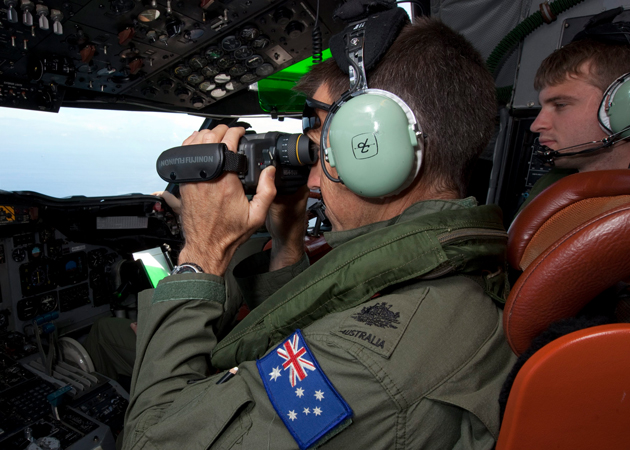 The southern oceans are a place of wild extremes, says Russell, conditions which have made studying—and searching—these oceans difficult, dangerous, and expensive. “The Southern Hemisphere winds are 30 percent stronger than the Northern Hemisphere winds,” she says. “They don’t have speed bumps, in the same way that the Rockies and the Himalayas provide in the Northern Hemisphere. They just get a little, tiny tickle from the Andes. But mostly they just roar.” On the surface of the oceans, she says, there are “miserable winds” and “huge enormous, towering seas,” and underneath the surface, driving currents. “Mother nature can crush your boat like a beer can.” Bad for science, and also a concern, Russell says, for any ongoing search efforts.

“When things happen in the Indian [Ocean], we find out a how little infrastructure we actually have in place,” Russell says, referring to everything from ports from which boats can be deployed, to data installations to monitor the changing oceans.

That means scientists are playing catchup with the data, says Matthew England from UNSW, and there are basic holes in our understandings of the ocean. “The reality is that the ocean there is very poorly measured,” he says. “We have some evidence from satellites, but not nearly enough measurements, not nearly enough understanding of the flow patterns there. We largely rely on models to piece that together. There’s a bit of guesswork there.”

All three scientists agree that new technology is making data collection in this vast unknown a little easier, though there’s a lot ground to make up. “Argo floats” are battery-powered autonomous robots that park themselves under the surface of the ocean and transmit all sorts of useful data that can help scientists map the ocean, and the climate, more clearly. “For us, this is our revolution, this is our Hubble space telescope. This is the tool that has completely changed the game,” says Rintoul. 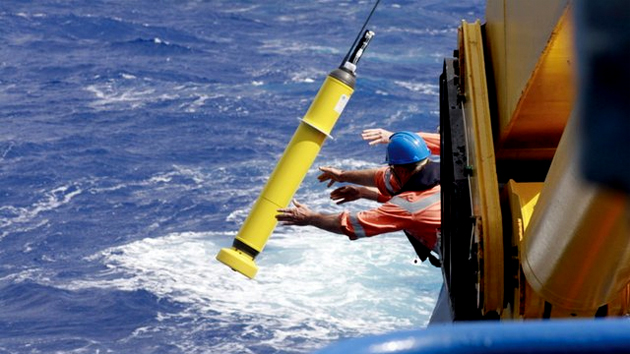 Deploying an “Argo float” in the Southern Ocean Alicia Navidad/CSIRO

But Russell warns there still so many more secrets to unlock before we can truly understand how we are changing some of Earth’s most powerful systems. “This is one of those grand challenges, one of those big things that is really hard. We have to grapple with Mother Nature and try to say, ‘Look lady, give us your secrets! We won’t get rough with you, please don’t get rough with us!'”