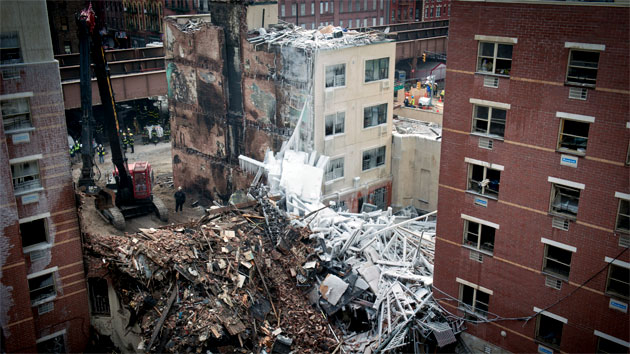 Investigators from the National Transportation Safety Board have yet to officially identify the cause of the disaster, but they appear to be focusing on a natural gas leak. They’ve isolated a crack in an 8-inch gas pipeline running next to one of the two apartment buildings, part of a system that is over 100 years old. If confirmed, this incident would be tied with a 2010 blast in San Bruno, CA., as the decade’s deadliest gas explosion.

The Harlem tragedy is drawing national attention to the safety of America’s aging—and expanding—gas networks. Here’s what you need to know:

What is natural gas?

Natural gas is a fossil fuel largely comprised of methane, a colorless and highly combustible gas. In large enough quantities, or if ignited, methane can be explosive.

The existing network—the labyrinth of pipes, big and small, that carry gas from well head to stove—is big, and getting bigger. There are more than 2.4 million miles of pipelines dedicated to carrying natural gas across the country. The vast majority of that—more than 80 percent—is made up of distribution lines, the small-gaugue pipes that deliver gas to your apartment, house or business for heating and cooking. The rest of the network is for gathering natural gas from its source and delivering it to refineries, and then transmitting it through larger pipes across long distances to the cities and power plants that need it.

As domestic gas production soars to all-time highs—driven by the expansion of fracking—all that gas needs to be transported. That means more pipelines. The gas network has grown nearly 60 percent over the last 30 years, from 1.55 million miles to 2.45 million miles. The Federal Energy Regulatory Commission says 45 major gas projects with 1,723 new miles of pipelines are on the horizon. 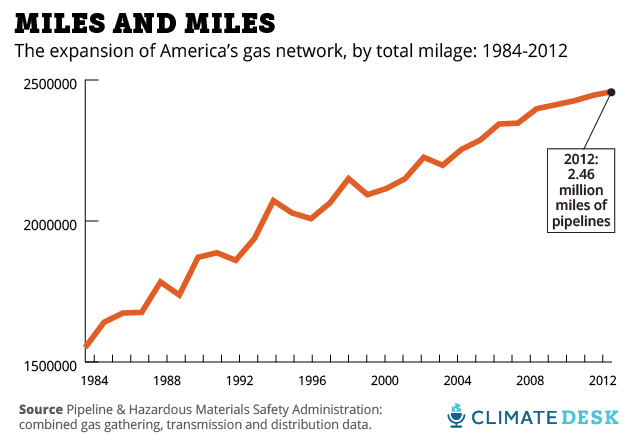 How dangerous is the gas network?

Here are the basic numbers: In the 10 years since 2004, there have been 129 people killed and 533 injured in more than 2,660 major incidents on America’s gas network. Those accidents have cost a combined $2.4 billion in property damage, not including the cost of lost gas itself. But the network has become much safer over the years. The total annual number of pipeline incidents involving death or injury (including pipes that carry gas and those that carry hazardous liquids) has dropped by more than half from 1991-2010. Overall, major gas pipeline incidents have dropped 27 percent in the last 10 years.

But deadly accidents still occur. Casting an even deeper look through the data, here are the deadliest incidents from the last three decades: 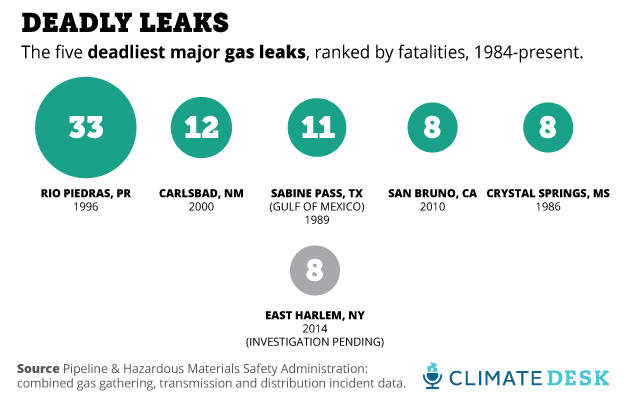 Which cities have the most leaks?

When counting total numbers of major leaks over 30 years, that title goes to Houston, which had 105 gas leaks serious enough to report to the federal agency in charge of pipeline safety. The numbers, compiled from the Pipeline and Hazardous Materials Safety Administration (PHMSA) data, include incidents across the entire labyrinthine national gas network, including distribution, gathering and long distance transmission lines. To qualify as significant enough to report, an incident must have involved death, serious injury or the significant loss of gas or property—though the precise criteria has varied over the years.* Austin comes in second, followed by Phoenix and New York. At the state level, nearly one in every five major gas leaks happens in Texas, almost double the number that occur in second-placed Louisiana. With just over 3 percent of the nation’s major gas leaks, New York State is sixth.

*UPDATE March 31, 2014: The above paragraph originally said that to be included in this data, a gas leak must have “caused” death, serious injury or significant loss of gas or property. In fact, the data also includes a number of so-called “fire-first” incidents, in which building fires that were caused by something other than the natural gas system subsequently damaged gas equipment, resulting in the release of gas. For example, Enstar, a gas operator in Anchorage, has pointed out that the vast majority of its reported leaks were the result of fires that its gas didn’t cause.

In 2010, the PHMSA changed its reporting requirements in response to industry concerns that fire-first incidents were skewing the data. According to the National Association of Pipeline Safety Representatives (NAPSR), an industry group, the new guidance has eliminated the need to report the vast majority of house fires.

Newer, plastic pipelines, while less susceptible to corrosion, can melt more easily than older iron or steel installations, according to NAPSR chairman Darin Burk. “When we switched to plastic, we started seeing more of it,” he said, referring to fire-first incidents. Gas from a damaged pipe can sometimes make fires more powerful, according to the PHMSA. Burk says that while the ease of maintenance and cost of plastic pipes make the material a great product for consumers and industry alike, “it does have its issues.” 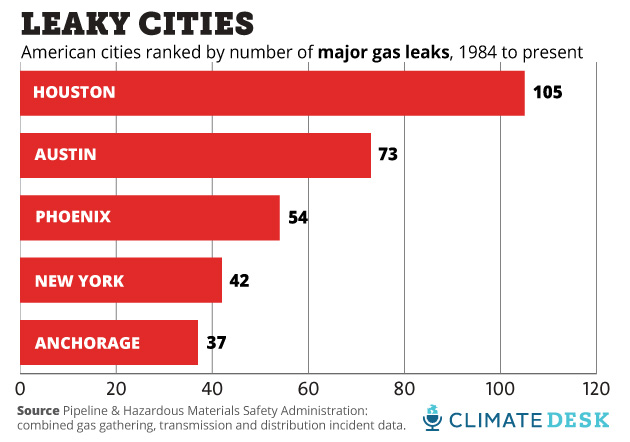 What do leaks mean for the climate?

While energy production from natural gas is touted as a lower-emissions alternative to coal, gas leaks contribute significantly to global warming. Methane is a potent greenhouse gas. Unlike carbon dioxide, methane doesn’t last very long in the atmosphere. But pound-for-pound, it’s 21 times more powerful than CO2 at trapping heat over a 100-year period. America’s natural gas system is the country’s biggest manmade source of these powerful methane emissions, and the fourth biggest source of carbon dioxide emissions, according to the EPA.

Methane leaks are the low-hanging fruit of climate action: The World Resources Institute believes that ?fixing these leaks would be the single biggest step America can take toward meeting its long-term greenhouse gas reduction goals.? A 2013 WRI study says natural gas producers allow $1.5 billion worth of methane to escape from their operations every year.

In 2011, gas companies reported releasing 27.9 million metric tons of methane (when measured as an equivalent to CO2) into the atmosphere during the distribution stage, mostly from what’s known as “fugitive emissions”—or leaks—from pipelines. Old cast iron pipes are largely to blame, according to the EPA. Newer plastic pipes leak less. As they are installed more and more, there are fewer emissions; methane emissions from gas distribution have fallen 16 percent since 1990.

Catastrophic leaks like the one that apparently happened in East Harlem have at times been attributed to an aging gas network whose pipes can corrode and rupture. Leaks can also happen as a result of excavation or extreme weather, as was the case in the loss of New Orlean’s gas network after Hurricane Katrina in 2005.

Half of the nation’s pipes were constructed in the 1950s and 1960s during a post-war boom. The Department of Transportation says there are still around 36,000 miles of old cast iron pipes mainly concentrated in five states: New Jersey, New York, Massachusetts, Pennsylvania, and Michigan. Cast iron used in mains and service lines is four times more prone to serious leaks than other materials.

The gas pipe into the destroyed buildings in East Harlem was partly made of cast iron and dated back to 1887.

So, why don’t they just replace all the old pipes?

Right now, a major problem is that companies don’t have incentive to replace the pipes, because they are allowed to pass on the costs of leaked gas to consumers, according to Senator Ed Markey (D-Mass.). A report prepared by his office says that in 2012, gas companies replaced just 3 percent of their distribution mains made of cast iron or bare steel—another material that ruptures more easily than newer plastic models. At that rate, it will be many more decades before cities have a fully replaced system. It will be 2090, for example, before residents of New York state can enjoy that reality.

In a sign that the rapid expansion of the country’s gas network hasn’t necessarily improved the existing infrastructure, the average age of the pipelines involved in accidents has continued to go up and up over the last 20 years: 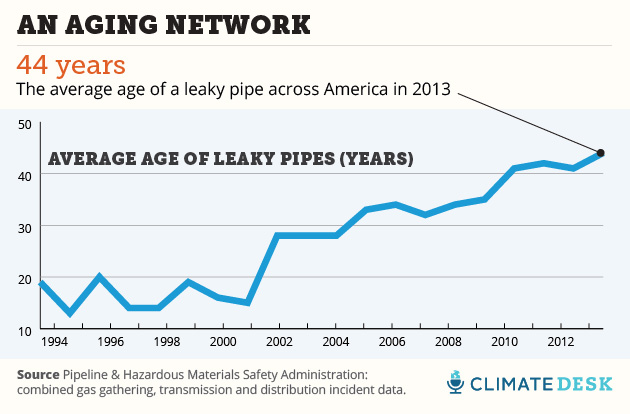 What are politicians doing about the problem?

As the National Transportation Safety Board investigates the East Harlem explosion, local politicians are pushing to make New York’s system safer. “The human cost of inaction is clear,” New York City councilman Ydanis Rodriguez said after the explosion. “If the necessary funding for these repairs and improvements is not granted by the federal and state governments, tragic occurrences such as today’s may become more common in our city.”

On the national level, Markey introduced bills last year intended to accelerate pipeline replacement programs. Those proposals, which remain stuck in committee, would cap the leakage costs that pipeline operators are allowed to pass on to consumers and would force operators to prioritize replacing older pipes.

Congressional Republicans are focused on building more large-scale transmission pipelines. They want to speed up the permit process via the “Natural Gas Pipeline Permitting Reform Act,” which passed the House last year. The White House has promised to veto the bill, saying it goes too far and lacks appropriate safeguards. For his part, President Obama made natural gas a centerpiece of his State of the Union address this year, promising to “act on my own to slash bureaucracy and streamline the permitting process for key projects.” The administration is also considering how to accelerate exports of natural gas.

Which companies have the most leaks?

Here’s a breakdown of the leakiest operators in the US in the past five years. Some of these companies, like Pacific Gas and Electric run the pipes that supply gas to your home, and then sell it to you. Others, like Tennessee Gas Pipeline Company (owned by energy transportation giant Kinder Morgan), run massive interstate transmission lines. Interestingly, the list includes ANR Pipeline, which is was purchased in 2007 by TransCanada—the prospective builder of the controversial Keystone XL pipeline. ANR has reported 37 major leaks in the past five years, racking up over $11 million worth of property damages: 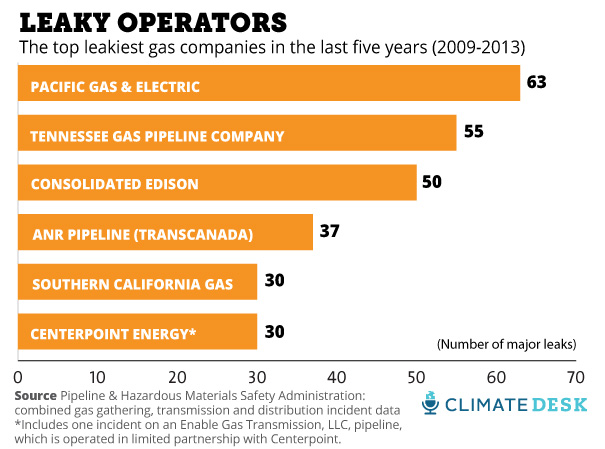