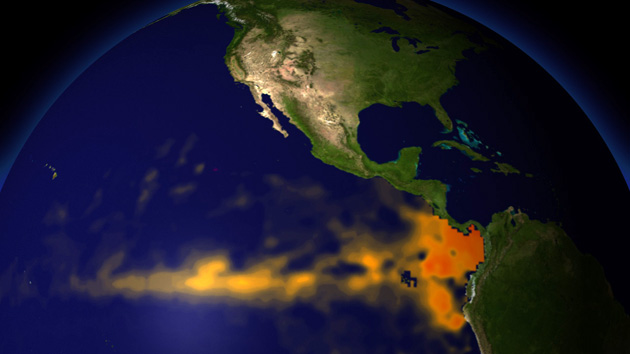 El Niño, warmer than average waters in the "Niño3.4" region of the tropical Pacific Ocean, affects weather around the world.<a href="http://www.noaanews.noaa.gov/stories2013/20130207_pmel_elnino.html">NOAA Visualization Lab</a>

This story originally appeared in Slate, and is republished here as part of the Climate Desk collaboration.

The odds are increasing that an El Niño is in the works for 2014—and recent forecasts show it might be a big one.

As we learned from Chris Farley, El Niños can boost the odds of extreme weather (droughts, typhoons, heat waves) across much of the planet. But the most important thing about El Niño is that it is predictable, sometimes six months to a year in advance.

That’s an incredibly powerful tool, especially if you are one of the billions who live where El Niño tends to hit hardest—Asia and the Americas. If current forecasts stay on track, El Niño might end up being the biggest global weather story of 2014.

The most commonly accepted definition of an El Niño is a persistent warming of the so-called “Niño3.4” region of the tropical Pacific Ocean south of Hawaii, lasting for at least five consecutive three-month “seasons.” A recent reversal in the direction of the Pacific trade winds appears to have kicked off a warming trend during the last month or two. That was enough to prompt US government forecasters to issue an El Niño watch last month.

Forecasters are increasingly confident in a particularly big El Niño this time around because, deep below the Pacific Ocean’s surface, off-the-charts warm water is lurking: 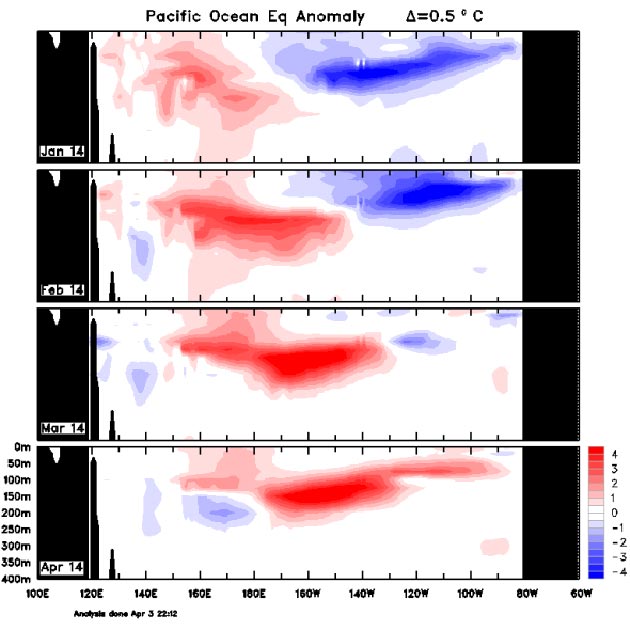 As that blob of warm water moves eastward, propelled by the anomalous trade winds, it’s also getting closer to the ocean’s surface. Once that happens, it will begin to interact with the atmosphere, boosting temperatures and changing weather patterns.

There are signs that this huge pool of sub-surface warmth is starting to emerge on the surface in recent days:

Which means that April 2014 could be the month the mega El Niño gets officially underway.

Now, before we get ahead of ourselves, meteorologist Cliff Mass warns that this time of year is known for lower performance in forecasting El Niños. But in general, scientists who follow these things are anticipating what could become a strong event.

“We’re carefully watching the potential development of an El Niño later this spring and into summer,” said forecaster Tony Barnston of the International Research Institute for Climate and Society in a recorded briefing message. “Below the surface we have a lot of warming and that could eventually make its way to the surface and create an El Niño.”

The warm water just below the ocean’s surface is on par with that of the biggest El Niño ever recorded, in 1997-98. That event caused $35 billion in damages and was blamed for around 23,000 deaths worldwide, according to the University of New South Wales. The 1997-98 El Niño is also the only other time since records begin in 1980 that sub-surface Pacific Ocean water has been this warm in April.

Climate change skeptics point to El Niño-fueled 1998 as the year global warming “stopped.” Of course, global warming hasn’t stopped at all. The 10 hottest years on record have all occurred since 1998. The acceleration of that warming has slowed, though, compared with the previous breakneck pace during the late 20th century.

One of the theories put forth by the mainstream scientific community to explain the slow-down since 1998 has been increased storage of warm water in the Pacific Ocean. If that theory is true, and if a major El Niño is indeed in the works, the previously rapid rate of global warming could resume, with dramatic consequences.

As I wrote last fall, the coming El Niño could be enough to make 2014 the hottest year in recorded history, and 2015 could be even warmer than that. The 1997-98 super El Niño was enough to boost global temperatures by nearly a quarter of a degree Celsius. If that scale of warming happens again, the world could approach a 1ºC departure from pre-industrial times as early as next year. As climate scientist James Hansen has warned, that’s around the highest that temperatures have ever been since human civilization began.

Indeed, even the forecast is already having an effect: An index of global food prices reached a 10-month high in March, blamed in part on shortages an El Niño may exacerbate. Here’s what else we could expect:

But perhaps the strangest impact so far has been in India, where monsoon forecasting is at the heart of national politics. The meteorology department there has accused US weather forecasters of “spreading rumors” and colluding to ruin the Indian stock market by forecasting a return of El Niño.

There’s a bit of good news, too: Hurricane seasons in the Atlantic tend to be less severe under this kind of forecast. And people in drought-stricken California could be forgiven if they’re crossing their fingers for a strong El Niño, which is linked to some of the wettest years in state history. Still, it’s certainly no slam dunk that an El Niño would be enough to end the crippling drought there or even bring above normal rainfall. And if the El Niño ends up being as strong as current predictions indicate, there’s a chance it may even tip the scales from drought to deluge across the state, spurring damaging mudslides amid bursts of heavy rain. The two strongest El Niños in the last 30 years—1982-83 and 1997-98—both caused widespread damage from flooding in California.

The moral of the story here is: Be careful what you wish for.