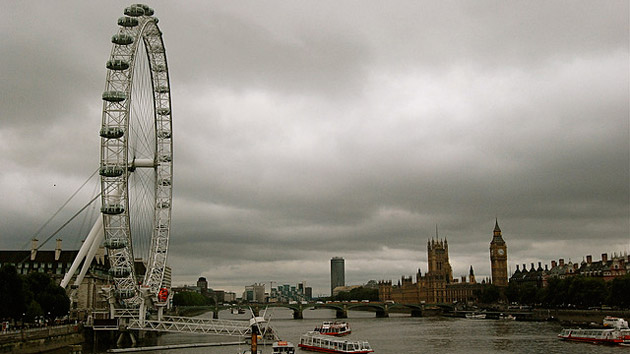 This story originally appeared in The Atlantic Cities and is republished here as part of the Climate Desk collaboration.

Solar panels have always made sense in cities that get a lot of sun, at least intuitively. But in recent years, scientists have figured out ways to make them more useful for perpetually gloomy cities like London and Seattle.

The solution comes down to organic photovoltaics. Unlike traditional solar panels, made of silicon, OPV cells are made of organic semiconductors, which can be 3D-printed or coated over large areas, as seen in the video below.

The promise of OPV’s isn’t necessarily that they’d produce more power than traditional panels, but that they’re more efficient at generating power from limited lighting.

Silicon cells require direct sunlight (rays must shine at at least 90 degrees) before they start outputting energy. But newer technologies like OPV generate energy regardless of the angle of the rays. On a cloudy day, though there is less sunlight overall, rays still hit the earth at multiple angles. Thus, OPV cells can produce energy for a larger portion of the day.

In places like the UK, where strong direct sunlight is rare, OPV devices could end up generating more energy than conventional silicon panels, says the UK National Physical Laboratory’s Dr. Fernando Castro, a leading researcher on this subject. The efficiency of this technology has already climbed rapidly in recent years, from 5 percent in 2008 to 12 percent in 2013. Conventional solar panels average about 15 percent efficiency, with the best commercial products coming in at around 20 percent.

But according to Castro, those efficiency numbers do not necessarily reflect how traditional and OPV cells would stack up to each other in real life, and especially in cloudy places.

Currently, OPV products are struggling to compete in a marketplace built around traditional silicon panels. The billion-dollar industry relies on an efficiency rating system that judges a panel based on its performance under simulated lab conditions–which is to say, the strong, direct lighting that silicon panels are optimized for.

A technology that is very efficient in direct light as simulated in the lab will get a high efficiency rating, even if it is inefficient under indirect (e.g. early morning/late afternoon) or diffuse sunlight (e.g. cloudy conditions). But a technology which is designed to be better under sunlight coming from many angles, as is the reality on cloudy days, may get a very low efficiency rating.

So even though OPV devices may be more useful for certain regions, the current rating system would brand them as “low-efficiency,” deterring potential investors and customers. The fact that OPVs are thinner, more flexible, and cheaper to produce than conventional cells (and can also come in different colors, shapes, and levels of transparency) means opportunities for commercialization are aplenty, if only they can prove their efficiency.

That’s why Castro is now working with other OPV researchers and developers to come up with a new metric for PV efficiency based on the power output generated by solar cells during real operation, instead of the peak efficiency obtained in a lab. Castro says the need for international partners to agree on measurement standards slows things down a bit, but he expects significant progress within three years.