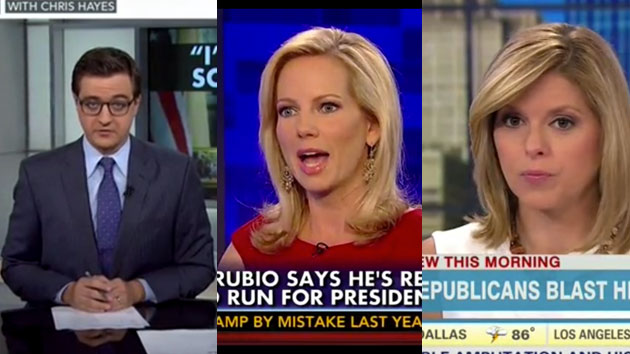 Correction, May 15, 11.00 am ET: This post originally stated that Fox didn’t cover the Antarctica story at all. Thanks to Shauna Theel from Media Matters for pointing out that Fox did cover the story once on Tuesday afternoon, during Shepard Smith’s news program around 3:20pm. I regret the error and I’ve updated the post accordingly. Watch the video from Media Matters below.

Monday’s blockbuster climate news was that the West Antarctic Ice Sheet is broken—already destabilized by irrevocable melting that foreshadows a slow-motion collapse. Up to 13 feet of sea-level rise might be the result. Two separate scientific papers, in the journals Science and Geophysical Research Letters, found this unstoppable decline was a result of a dangerous feedback loop driven by the warming waters related to climate change: higher temperatures will result in melting ice that will, in turn, expose an even greater amount of ice to higher sea temperatures. Scientists said the process could take centuries, even a millennium, but could ultimately rewrite the world’s coastlines.

That sounds like pretty big stuff to cover in the news, right? The science itself got a ton of coverage in the print media and online. You’d think it might also deserve a bit of cable news airtime, using some good old fashioned explanatory journalism?

But as the world took in the news, cable news channels largely avoided giving their viewers a proper rundown of the science.

I took to the TV news section of the Internet Archive, which makes television news shows searchable via closed captions, and then cross-referenced my findings with LexisNexis—the online news database that provides transcripts of many cable shows. And I looked at CNN’s own transcript portal.

The results? CNN didn’t cover the Antarctica story on air on Monday or Tuesday, while MSNBC covered it several times. Just two segments—on MSNBC and Fox—took the Antarctica news and produced it into a full story on its own terms, and that was the day after the news broke

Beyond that, what news there was about climate change focused on the 2016 presidential race, in particular Marco Rubio’s recent comments to ABC’s “This Week.” “I do not believe that human activity is causing these dramatic changes to our climate the way these scientists are portraying it,” he told interviewer Jonathan Karl (in New Hampshire, no less). These comments sparked a myriad of cookie-cutter round-table discussions on cable news. Admittedly, it is a great, revealing interview, in which Rubio produces some strong language on climate change intended to cement his conservative credentials, and the whole thing is well worth watching in full: “I do not believe that the laws that they propose we pass will do anything about it, except it will destroy our economy,” he said.

Here’s more detail about how each cable network covered climate change in the wake of the Antarctica findings:

There was no mention of Antarctic melting on Fox News on Monday. Around 2:15 pm on Monday—more than an hour after NASA’s press conference—The Real Story With Gretchen Carlson (with Shannon Bream filling in) covered the Rubio climate story instead. “What Senator Rubio was not saying was that he believes that climate change—he’s saying that climate change is not manmade. That belies 97 percent of the world’s climatologists,” Bream’s guest Julie Roginsky? bravely (and rightly) contended. “There is a lot of debate still about that,” Bream quickly reminded her audience, before springing away to talk about Rand Paul, who is “also in the mix for 2016.” For a moment there, I thought we might inch closer to the science.

Fox did allow a little more time for the climate change (its politics anyway), in the 6:00 pm hour with Bret Baier—but no Antarctica: a panel discussion between old faves Charles Krauthammer, Mara Liasson, and Steve Hayes which gave largely favorable reviews of Rubio’s statements. “What he was saying, in effect, is global warming alarmists are hyping it. I think that’s an entirely defensible statement,” Hayes said.

On Tuesday afternoon around 3:20pm, Shepard Smith presented a two-minute segment on the Antarctic melting (watch below). “This is settled science,” he said, later adding, “climate change, it is real. The science is true.”

Outside of cable news, comments from the scientists themselves came across as pretty dire on Monday: “A large sector of the western Antarctic ice sheet has gone into a state of irreversible retreat. It has passed the point of no return,” Suzanne Goldenberg at the Guardian quoted glaciologist Eric Rignot as saying. “This retreat will have major consequences for sea level rise worldwide.”

But after searching CNN’s transcripts, I found nothing on Antarctica on air across Monday or Tuesday, not least a scientist. The network instead was dominated by promoting Anderson Cooper’s exclusive interview with Donald Sterling on Monday, and then again Tuesday, with the mop-up job of covering Sterling’s outlandish and offensive remarks about Magic Johnson.

Of the three major cable news stations, MSNBC did by far the best job covering climate change—but it still hewed much more closely to presidential politics than the new Antarctica science, at least on Monday. Ronan Farrow featured Rubio’s comments on climate change, and got his guests to comment on how Rubio is appealing to the Republican base by going “100 percent denier.” The theme was picked up again during The Reid Report: the same sound bite, the same analysis (this time with Buzzfeed’s McKay Coppins).

Mother Jones’ own David Corn weighed in on Rubio on Hardball with Chris Matthews, pointing out that climate change and sea level rise is a major threat to Rubio’s home state of Florida. “It’s a big deal, as you point out,” Matthews said. PoliticsNation’s Al Sharpton also told Rubio to “go back to science class” on climate change.

All In with Chris Hayes—a host who routinely tackles climate change and is featured on Showtime’s climate series Years of Living Dangerously—wins the Climate Desk award for two Antarctica mentions, prominently using the science as his opening news peg to hop into a package on Rubio’s presidential aspirations and calling climate denialism the “price of entry” to become a contender for the GOP—a far more forensic examination than either CNN or Fox provided. A follow-up interview with Think Progress’ Joe Romm, an actual scientist, addressed the Antarctica findings (“super-depressing,” said Hayes) in the context of how the continent’s melt could put Florida under water.

On Tuesday, there was more. Morning Joe read a summary of the story off the front page of the New York Times as part of a news roundup. MSNBC show Jansing & Co. also covered the news Tuesday morning, mentioning it quickly before segueing into another panel about the politics of climate change.

And finally (finally), Tuesday on NewsNation, MSNBC hosted an extended discussion of the Antarctica science. And who else could bring this story home better than Bill Nye, who joined the host to talk about the melting of the Antarctic glaciers and the future of climate change.

“The longest journey starts with a single step,” Nye said, speaking about action to curb greenhouse gas emissions. But he might as well have been talking about the media.

That single step for cable news is simply talking about the science at all.