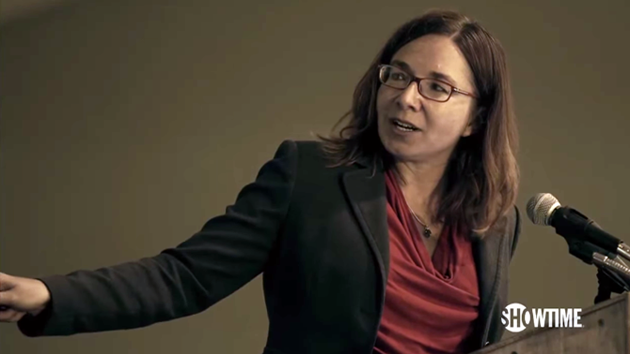 Climate scientist Katharine Hayhoe, an evangelical Christian, has had quite the run lately. A few weeks back, she was featured in the first episode of the Showtime series The Years of Living Dangerously, meeting with actor Don Cheadle in her home state of Texas to explain to him why faith and a warming planet aren’t in conflict. (You can watch that episode for free on YouTube; Hayhoe is a science adviser for the show.) Then, Time magazine named her one of the 100 most influential people of 2014; Cheadle wrote the entry. “There’s something fascinating about a smart person who defies stereotype,” Cheadle observed.

Why is Hayhoe in the spotlight? Simply put, millions of Americans are evangelical Christians, and their belief in the science of global warming is well below the national average. And if anyone has a chance of reaching this vast and important audience, Hayhoe does. “I feel like the conservative community, the evangelical community, and many other Christian communities, I feel like we have been lied to,” explains Hayhoe on the latest episode of the Inquiring Minds podcast. “We have been given information about climate change that is not true. We have been told that it is incompatible with our values, whereas in fact it’s entirely compatible with conservative and with Christian values.”

Hayhoe’s approach to science—and to religion—was heavily influenced by her father, a former Toronto science educator and also, at one time, a missionary. “For him, there was never any conflict between the idea that there is a God, and the idea that science explains the world that we see around us,” says Hayhoe. When she was 9, her family moved to Colombia, where her parents worked as missionaries and educators, and where Hayhoe saw what environmental vulnerability really looks like. “Some of my friends lived in houses that were made out of cardboard Tide boxes, or corrugated metal,” she says. “And realizing that you don’t really need that much to be happy, but at the same time, you’re very vulnerable to the environment around you, the less that you have.”

“In terms of addressing the climate issue,” says Hayhoe, “we don’t have time for everybody to get on the same page regarding the age of the universe.”

Her research today, on the impacts of climate change, flows from those early experiences. And of course, it is inspired by her faith, which for Hayhoe, puts a strong emphasis on caring for the weakest and most vulnerable among us. “That gives us even more reason to care about climate change,” says Hayhoe, “because it is affecting people, and is disproportionately affecting the poor, and the vulnerable, and those who cannot care for themselves.”

The fact remains, though, that most evangelical Christians in the United States do not think as Hayhoe does. Recent data from the Yale Project on Climate Change Communication suggests that while 64 percent of Americans think global warming is real and caused by human beings, only 44 percent of evangelicals do. Evangelicals in general, explains Hayhoe, tend to be more politically conservative, and can be quite distrusting of scientists (believing, incorrectly, that they’re all a bunch of atheists). Plus, some evangelicals really do go in for that whole “the world is ending” thing—not an outlook likely to inspire much care for the environment. So how does Hayhoe reach them?

From our interview, here are five of Hayhoe’s top arguments, for evangelical Christians, on climate change:

1. Conservation is Conservative. The evangelical community isn’t just a religious community, it’s also a politically conservative one on average. So Hayhoe speaks directly to that value system. “What’s more conservative than conserving our natural resources, making sure we have enough for the future, and not wasting them like we are today?” she asks. “That’s a very conservative value.”

Indeed, many conservatives don’t buy into climate science because they don’t like the “Big Government” solutions they suspect the problem entails. But Hayhoe has an answer ready for that one too: Conservative-friendly, market-driven solutions to climate problems are actually all around us. “A couple of weeks ago, Texas…smashed the record for the most wind energy ever produced. It was 38 percent of our energy that week, came from wind,” she says. And Hayhoe thinks that’s just the beginning: “If you look at the map of where the greatest potential is for wind energy, it’s right up the red states. And I think that is going to make a big difference in the future.”

2. Yes, God Would Let This Happen. One conservative Christian argument is that God just wouldn’t let human activities ruin the creation. Or, as Senator James Inhofe of Oklahoma has put it, “God’s still up there, and the arrogance of people to think that we, human beings, would be able to change what he is doing in the climate, is to me, outrageous.” You can watch Inhofe and other religious right politicians dismissing climate change on biblical grounds in this video:

Hayhoe thinks the answer to Inhofe’s objection is simple: From a Christian perspective, we have free will to make decisions and must live with their consequences. This is, after all, a classic Christian solution to the theological problem of evil. “Are bad things happening? Yes, all the time,” says Hayhoe. “Someone gets drunk, they get behind the wheel of a car, they kill an innocent bystander, possibly even a child or a mother.”

Climate change is, to Hayhoe, just another wrong, another problem, brought on by flawed humans exercising their wills in a way that is less than fully advisable. “That’s really what climate change is,” she says. “It’s a casualty of the decisions that we have made.”

3. The Bible Does Not Approve of Letting the World Burn. Hayhoe agrees with the common liberal perception that the evangelical community contains a significant proportion of apocalyptic or end-times believers—and that this belief, literally that judgment is upon us, undermines their concern about preserving the planet. But she thinks there’s something very wrong with that outlook, and indeed, that the Bible itself refutes it.

“The message that, we don’t care about anybody else, screw everybody, and let the world burn, that message is not a consistent message in the Bible,” says Hayhoe. In particular, she thinks the apostle Paul has a pretty good answer to end-times believers in his second epistle to the Thessalonians. Hayhoe breaks Paul’s message down like this: “I’ve heard that you’ve been quitting your jobs, you have been laying around and doing nothing, because you think that Christ is returning and the world is ending.” But Paul serves up a rebuke. In Hayhoe’s words: “Get a job, support yourself and your family, care for others—again, the poor and the vulnerable who can’t care for themselves—and do what you can, essentially, to make the world a better place, because nobody knows when that’s going to happen.” 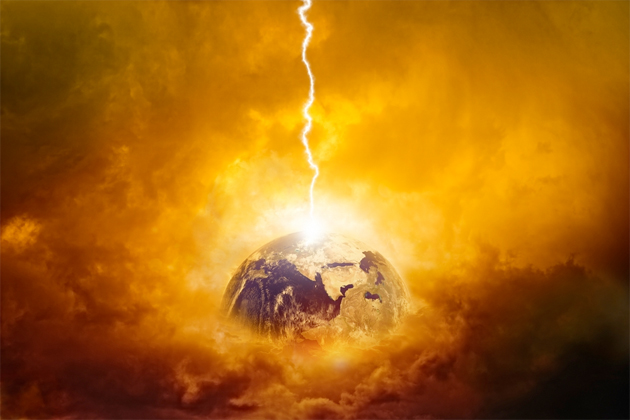 One reason some evangelicals dismiss climate worries is an apocalyptic worldview. Igor Zh./Shutterstock

4. Even If You Believe in a Young Earth, It’s Still Warming. One reason there’s such a tension between the evangelical community and science is, well, science. Many evangelicals are Young-Earth creationists, who believe that the Earth is 6,000 or so years old.

Hayhoe isn’t one of those. She studied astrophysics, and quasars that are quite ancient; and as she notes, believing the Earth and universe to be young creates a pretty problematic understanding of God: “Either you have to believe that God created everything looking as if it were billions of years old, or you have to believe it is billions of years old.” In the former case, God would, in effect, seem to be trying to trick us.

But when it comes to talking to evangelical audiences about climate change, Hayhoe doesn’t emphasize the age of the Earth, simply because, she says, there’s no need. “When I talk to Christian audiences, I only show ice core data and other proxy data going back 6,000 years,” says Hayhoe, “because I believe that you can make an even stronger case, for the massive way in which humans have interfered with the natural system, by only looking at a shorter period of time.” 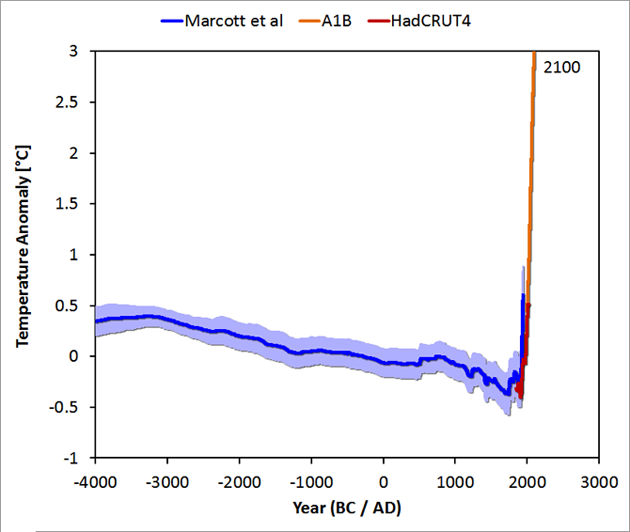 6,000 years of temperatures records and a projection of the warming to come. Jos Hagelaars/My View on Climate Change

“In terms of addressing the climate issue,” says Hayhoe, “we don’t have time for everybody to get on the same page regarding the age of the universe.”

5. “Caring for our environment is caring for people.” Finally, Hayhoe thinks it is crucial to emphasize to evangelicals that saving the planet is about saving people…not just saving animals. “I think there’s this perception,” says Hayhoe, “that if an environmentalist were driving down the road…and they saw a baby seal on one side and they saw a human on the other side, they would veer out of the way to avoid the baby seal and run down the human.” That’s why it’s so important, in her mind, to emphasize how climate change affects people (a logic once again affirming the perception that the polar bear was a terrible symbol for global warming). And there’s bountiful evidence of this: The just-released Intergovernmental Panel on Climate Change’s “Working Group II” report on climate impacts emphasizes threats to our food supply, a risk of worsening violence in a warming world, and the potential displacement of vulnerable populations.

So is the message working? Hayhoe thinks so. After all, while only 44 percent of evangelicals may accept modern climate science today, she notes that that’s considerable progress from a 2008 Pew poll, which had that number at just 34 percent. Ultimately, for Hayhoe, it comes down to this: “If you believe that God created the world, and basically gave it to humans as this incredible gift to live on, then why would you treat it like garbage? Treating the world like garbage says a lot about how you think about the person who you believe created the Earth.”

To listen to the full interview with Katharine Hayhoe, you can stream below:

This episode of Inquiring Minds, a podcast hosted by neuroscientist and musician Indre Viskontas and best-selling author Chris Mooney, also features a discussion of recent findings that laboratory mice respond differently to male researchers, and new breakthroughs in “therapeutic cloning,” or the creation of embryonic stem cell lines from cloned embryos.