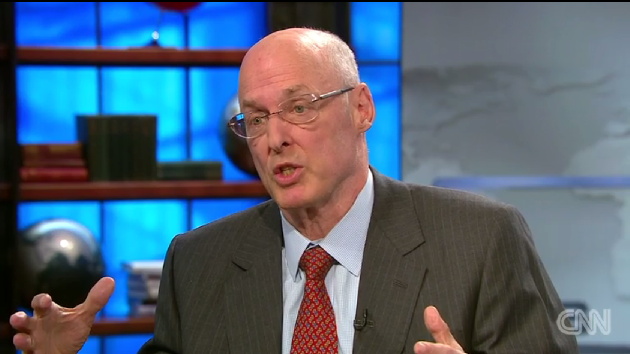 Knowing that conservatives will never listen to liberals—or to President Obama—on climate change, many well meaning, science-minded people have sought to identify other messengers who might possibly sway the right.

Accordingly, they’ve tried tapping evangelical Christians, former EPA administrators who served under Republican presidents, and celebrity politicians like the moderate Republican Arnold Schwarzenegger. It’s an astute, psychologically sound theory (“trusted messengers” and all that) and yet, it never seems to work. Why does it never work?

We’ll get to that, but first, witness the latest attempt, which is aimed at swaying the business community. This weekend on CNN’s Fareed Zakaria GPS, two former treasury secretaries, Henry Paulson (a Republican) and Robert Rubin (a Democrat), went on the air to discuss climate change and, in particular, the new “Risky Business” report with which they’re closely affiliated. The report, emerging from a partnership that also includes Michael Bloomberg and the environmentalist billionaire Tom Steyer, makes the case that climate change will have dire economic costs. On the air, Paulson said point blank that climate inaction entails “radical risk taking.” Rubin added that the risk is “catastrophic.” Watch:

All of this is true and eminently sane. It is also striking to find Paulson, a man who observed economic collapse up close, drawing analogies between how economies go belly up, and how civilizations do. And we should certainly commend CNN’s Zakaria for convening this discussion.

But here’s the problem: Is Paulson, a Wall Street Republican who says he wants a carbon tax, a “trusted messenger” on the right? The truth is that today’s conservatives aren’t the same pro-big business boosters that they used to be. Commenting on the latest industry oriented climate push, American Enterprise Institute scholar Norman Ornstein remarked that among tea party conservatives these days, “big business is seen as a part of the problem more than it is a part of the solution. [Companies] just don’t have the clout that they used to have.”

Remember, Wall Street has never been in favor of another key tea party maneuver: Debt ceiling brinksmanship, which seasoned economic stewards of yesteryear tend to abhor. So why would the tea party listen to to big business on climate?

If this was the United States of 30 years ago, we’d already have a bipartisan consensus on climate change.