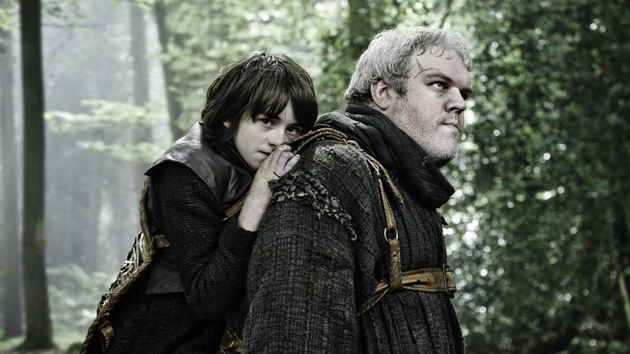 He might be fictional. But the gigantic Hodor, a character in the blockbuster Game of Thrones series, nonetheless sheds light on something very much in the realm of fact: how our ability to speak emerges from a complex ball of neurons, and how certain brain-damaged patients can lose very specific aspects of that ability.

According to George R.R. Martin, who wrote the epic books that inspired the HBO show, the 7-foot-tall Hodor could only say one word—”Hodor”—and everyone therefore tended to assume that was his name. Here’s one passage about Hodor from the first novel in Martin’s series:

Theon Greyjoy had once commented that Hodor did not know much, but no one could doubt that he knew his name. Old Nan had cackled like a hen when Bran told her that, and confessed that Hodor’s real name was Walder. No one knew where “Hodor” had come from, she said, but when he started saying it, they started calling him by it. It was the only word he had.

Yet it’s clear that Hodor can understand much more than he can say; he’s able to follow instructions, anticipate who needed help, and behave in socially appropriate ways (mostly). Moreover, he says this one word in many different ways, implying very different meanings:

So what might be going on in Hodor’s brain?

Hodor’s combination of impoverished speech production with relatively normal comprehension is a classic, albeit particularly severe, presentation of expressive aphasia, a neurological condition usually caused by a localized stroke in the front of the brain, on the left side. Some patients, however, have damage to that part of the brain from other causes, such as a tumor, or a blow to the head.

Martin doesn’t provide any details regarding whether Hodor suffered a traumatic brain injury as a child. But his symptoms are consistent with this type of disorder, also dubbed Broca’s aphasia after a 19th-century French physician named Paul Broca. Broca described a patient who had a lesion in the left frontal part of his brain and who could only say one word: “Tan.” And just like Hodor, Broca’s patient came to be known as “Tan”—the single word that he could utter voluntarily—even though it wasn’t his actual name.

Both Tan and Hodor showed the ability to infuse their single words with many different meanings, however, making themselves understood, at least to some extent, despite their impoverished vocabularies. What Tan therefore demonstrated to neuroscientists can be boiled down into two major points: (1) that different features of language—in this case, language comprehension and language production—are controlled by different parts of the brain and that damage to one region does not affect the other ability; and (2) that speech is far more complicated than simply putting together a string of words, as much of the information that we get from speech is independent of the words themselves.

Besides possibly being dropped as a baby, how else might Hodor have developed an expressive aphasia? Although not usually so severe, this type of speech difficulty can also be a result of malnutrition, such as a vitamin deficiency either in early childhood or in utero. This cause is less likely than a traumatic injury, however, as Hodor seemed to be fairly well fed at Winterfell (he is, after all, totally huge) and proper nutrition later in childhood can reverse the ill effects of early malnutrition.

On the latest episode of Inquiring Minds, we spoke with Sam Kean, author of the new book, The Tale of the Dueling Neurosurgeons, which describes the case of “Tan” and many other famous brain patients whose unique cases advanced neuroscience: