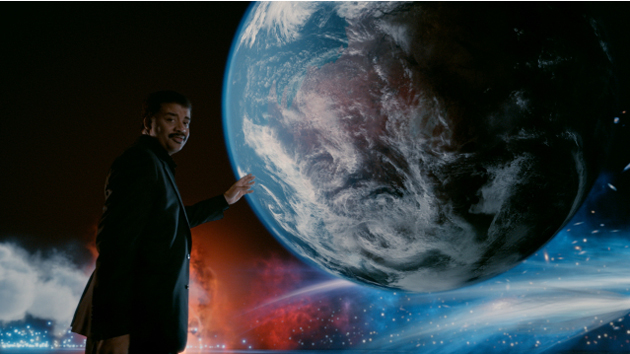 If you care about the place of science in our culture, then this has to be the best news in a very long time. Last Sunday night, Cosmos: A Spacetime Odyssey—which airs on Fox and then the next day on the National Geographic Channel—actually tied ABC’s “The Bachelorette” for the top ratings among young adult viewers, the “key demographic” coveted by advertisers. And it did so by—that’s right—airing an episode about the reality of climate change.

Tuesday evening, I had the privilege of sitting down with the show’s host, astrophysicist Neil deGrasse Tyson, to discuss this milestone, and how he feels generally as the 13-part series comes to a close. (The final episode, entitled “Unafraid of the Dark,” airs this Sunday night.) “The ratings are exceeding our expectations,” said Tyson, fresh off the climate episode triumph. But Tyson emphasized that to him, that’s not the most important fact: Rather, it’s that a science show aired at all in primetime on Sunday night.

I spoke with Tyson in the National Geographic Society’s Hubbard Hall in DC, below a painting of the society’s founders signing its charter in 1888. Tyson, wearing a glittering space-themed tie, sipped white wine before moving upstairs to a reception where he was destined for an hour of handshakes and selfies. Later that evening—after a special advance airing of the final episode of Cosmos—he would electrify a packed room by explaining to a young girl how solar flares work, a display that involved him sprawling across the stage (and his fellow panelists) as he contorted his body to mimic the dynamics of the sun’s plasma. The show concluded with Tyson explaining how “plasma pies” (as he dubbed them), ejected towards us by our star, ultimately become the aurora borealis and the aurora australis.

There were other Cosmos luminaries on the stage—including executive producers Brannon Braga and Ann Druyan, Carl Sagan’s widow—but Tyson won the room that night. Easily. 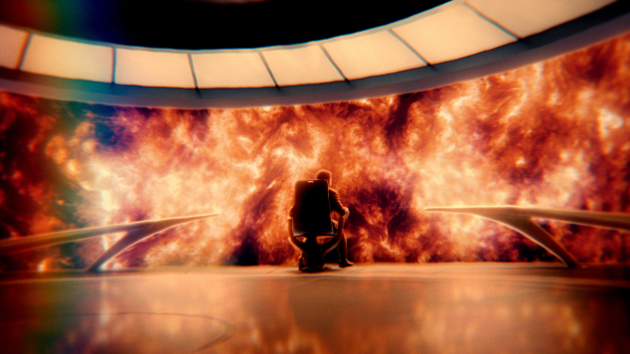 Neil deGrasse Tyson, surveying some of the universe’s awesomeness in Cosmos. Fox/National Geographic

Overall, Tyson notes, Cosmos premiered not only on Fox but on National Geographic Channel and, globally, in 181 countries and 46 languages. “It tells you that science is trending in our culture,” Tyson averred to me. “And if science is trending, that can only be good for the health, the wealth, and the security of our species, of our civilization.”

And yet, many members of our species still deny that the globe is warming thanks to human activities—a point that Cosmos has not only made a centerpiece but that, the program has frankly argued, threatens civilization as we know it. Tyson is know for being fairly non-confrontational; for not wanting to directly argue with or debate those who deny science in various areas. He prefers to just tell it like it is, to educate. But when we talked he was, perhaps, a little more blunt than usual.

“At some point, I don’t know how much energy they have to keep fighting it,” he said of those who don’t accept the science of climate change. “It’s an emergent scientific truth.” Tyson added that in the political sphere, denying the science is just a bad strategy. “The Republican Party, so many of its members are resistant to embracing the facts of climate change that the legislation that they should be eager to influence, they’re left outside the door,” said Tyson. “Because they think the debate is whether or not it’s happening, rather than what policy and legislation can serve their interests going forward.”

You can argue, in fact, that that is exactly what happened this week. One day after Cosmos’ highly rated climate episode aired, the EPA announced its new regulations for power plant carbon dioxide emissions. The whole reason that the Obama administration went this route—regulating carbon via the Clean Air Act—was that climate legislation (the first option, and the more desirable option) was impossible. The legislative math didn’t work. It would never pass.

Now, Republicans are extraordinarily upset by the EPA’s rules, as the agency moves in to fill a legislative vacuum. But thanks to their denial, they may well have lost their chance to find a more ideologically desirable solution, like a carbon tax. (In fairness, some coal state Democrats were also responsible for the failure of cap-and-trade legislation in Congress. West Virginia Democrat Joe Manchin famously shot the bill with a rifle in an ad for his 2010 Senate campaign.)

That’s bad for our politics, just as climate change is bad for our civilization—but it is surely some small saving grace to at least learn, thanks to Tyson and Cosmos, that science is not bad for the television business. The success of Cosmos, Tyson thinks, changes what can be on TV; how future network programmers will think, in the future, about what constitutes desirable content.

“It will open up their definition of what can be in primetime television,” he said.

On our most popular episode of the Inquiring Minds podcast, Neil Tyson explained why he doesn’t debate science deniers, and much more. You can listen here (interview starts around minute 13):