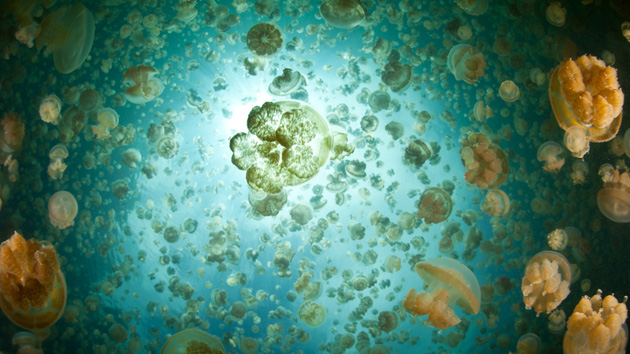 More than 50 million Americans swim in the oceans every year (there are actual government surveys of such things). So if your summer plans involves stripping down and bathing in the sun and salt water of your dreams, read on, intrepid beach-goer. There’s something gooey and stingy that’s loving warm waters every bit as much as you are (maybe even more), turning those dreams…to nightmares: jellyfish.

Are there more jellyfish now than ever before?

In some places, yes. One recent University of British Columbia study concluded that “jelly?sh populations appear to be increasing in the majority of the world’s coastal ecosystems and seas,” and blamed human activity for these blooms. The areas most affected are the Black Sea and the Mediterranean, says Lucas Brotz, a PhD student and jellyfish expert at University of British Columbia’s Fisheries Center, and co-author of the report.

Last October, a swarm of jellyfish plugged cooling pipes for one of the world’s largest nuclear reactors.

The influx of jellyfish can cause big problems. In October last year, a gelatinous swarm plugged cooling pipes for one of the world’s largest nuclear reactors, on the Baltic coast in Sweden, shutting it down. A swarm hobbled a coal-fired power plant near Hadera on the Israeli coast in 2011. Millions of bulging, translucent creatures descended on popular Mediterranean beaches in April 2013, freaking out the tourists. Jellyfish expert Lisa-ann Gershwin writes in her 2013 book Stung! that jellyfish caused the collapse of the $350 million Black Sea fishing industry in the 1990s. In 2007, a plague wiped out a salmon farm off Northern Ireland. 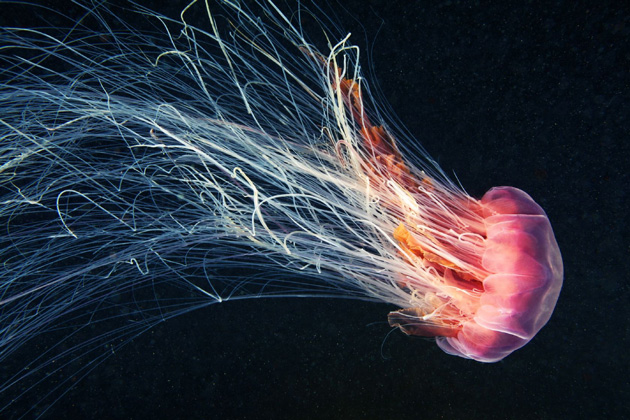 A Lion’s Mane, the largest known type of jellyfish, has tentacles that can reach 100 feet in length. Alexander Semenov/REX/AP Photo

North America hasn’t seen as many jellyfish-related problems as Europe, says Brotz. Although some parts of the West Coast—northern California in particular—have seen spikes in jellyfish populations, “they tend to be smaller species that don’t really affect people very much.”

Is climate change to blame for the increase in jellyfish?

While it’s difficult to trace any single jellyfish bloom to climate change—”It’s really tough, there’s a lot of noise in the signal,” Brotz says—warming oceans appear to be playing a role in the emerging pattern. That’s because the warmer the water, the less oxygen it can hold. Unlike other sea life, jellyfish are very good at surviving in these low-oxygen environments, giving them a comparative advantage.

“Remarkably, jellyfish may have the capacity to accelerate climate change.”

“Warmer water species are going to start to have more and more areas where they can expand their range into,” he says. Scientists have already observed this phenomenon in Australia’s jellyfish. Brotz expects that in the United States, especially on the East Coast, jellyfish will also begin “showing up earlier and sticking around for longer into the fall.”

While jellyfish appear to be really loving global warming, they could also be driving the change, writes Australian scientist Tim Flannery: “Remarkably, jellyfish may have the capacity to accelerate climate change,” he writes. “Jellyfish release carbon-rich feces and mucus (poo and goo) that bacteria prefer to use for respiration,” turning the bacteria into carbon-making factories, accelerating warming. A gelatinous feedback loop.

But scientists are split over the whether global warming is a dominant factor, and are desperate for more comprehensive datasets to fully understand the dynamic. There’s even an interactive website and smart phone apps developed by the Monterey Bay Aquarium Research Institute to encourage citizen scientists to submit their own sightings to help with a global tracking effort.

There are other factors driving population booms, of course, aside from global warming: Over-fishing has also killed off the jellyfish’s natural predators: fish. Pollution and ocean acidification may also be playing their parts in this complex story.

Should swimmers in the United States be worried?

Every year around the world there are an estimated 150 million jellyfish stings, according to recent research. In the United States, jellyfish are blamed for half a million stings in the Chesapeake Bay and up to 200,000 stings in Florida waters.

A single brush of the Irukandji jellyfish can cause searing pain, cramps, vomiting, and existential dread.

That sounds like a lot, but a jellyfish lashing in North America is “more the level of a bee sting,” says Brotz. “It’ll be quite painful and might even give you a little bit of scarring temporarily, but unless you have a severe allergy, it’s not going to be too dangerous.”

The most dangerous species of jellyfish—Chironex fleckeri and Irukandji—are found in the waters around Australia and the Philippines. It only takes three minutes for a sting from Chironex fleckeri, a species of box jellyfish, to kill you, with a tentacle laced with some of the world’s deadliest poison. Box jellyfish are outfitted with superior wits and senses to their jellyfish brethren, writes Flannery. For one, they can see: “They are also the only jellyfish with eyes that are quite sophisticated, with retinas and corneas… And they have brains, which are capable of learning, memory, and guiding complex behaviors.” (Shudder.) A single brush of the Irukandji jellyfish—in the box jellyfish family—can cause searing pain and cramps, inducing nausea and vomiting which can continue for 12 hours, and more insidiously, an existential dread: Victims are “gripped with a sense of ‘impending doom’.” 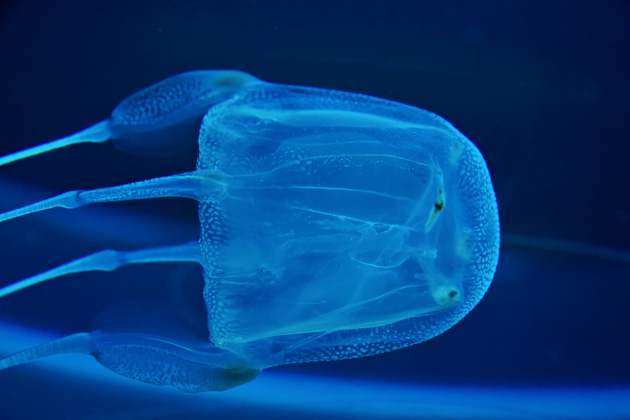 “As the oceans warm,” Flannery writes, “the tropical box jellyfish and the Irukandjis are likely to extend their ranges.” That’s already the case, with Irukandji spotted in coastal waters from Cape Town to Florida.

How many people die every year from jellyfish stings?

We don’t know, because deaths can so easily be attributed to other causes, like drowning. But readers filled with terror about sharks chomping down on your leg while you swim should put this in perspective: the death toll from jellyfish is definitely more than from sharks. Sharks kill about eight to 10 people a year. Jellyfish kill at least 50, according to Brotz.

If you get stung, what should you do?

I’m sorry to say, despite everything you’ve heard, peeing on a sting is not going to help. We’ll get to that in a moment. But first, here’s what’s going on when a jellyfish stings you.

A jellyfish has “thousands or millions” of these really fascinating little cells with their own venom sacs that operate “almost like a hypodermic syringe,” says Brotz. “If you come in contact with them, each cell has it’s own little trigger hair. Once the trigger hair gets fired, basically this little harpoon will shoot out of the cell.”

Here’s what to do, and what not to do, according to Brotz:

If there are too many jellyfish, what about eating them to control their populations?

People do eat jellyfish. It’s quite a common delicacy in parts of Asia, and the jellyfish-as-food business is booming, says Brotz, who estimates the annual global catch to be around one million tons. “I mean, that’s much more than the global catch of say lobsters, or scallops,” he says.

And while jellyfish fisheries are growing around the world to cater for the demand, Brotz warns that eating them won’t necessarily be a solution to overpopulation. 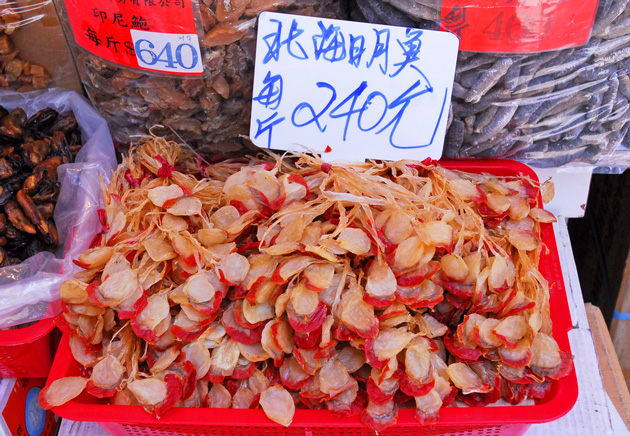 Of the twelve types of edible fish, sand jellyfish and cannonball jellyfish are the most popular, and tend to be a “more meaty, a little bit more dense species,” says Brotz. Consumers “really like to have the final product to have a little bit of a crunch to it,” and there’s only a handful of species that can really deliver.

What does it taste like? “It’s this interesting line between crunchy and chewy,” Brotz says. “It sort of reminds me of under-cooked pasta, like al dente pasta, with crunch and chew at the same time. Of course, it depends on what market it’s heading for. Japanese prefer their jellyfish much crunchier than, say, the Chinese do.”