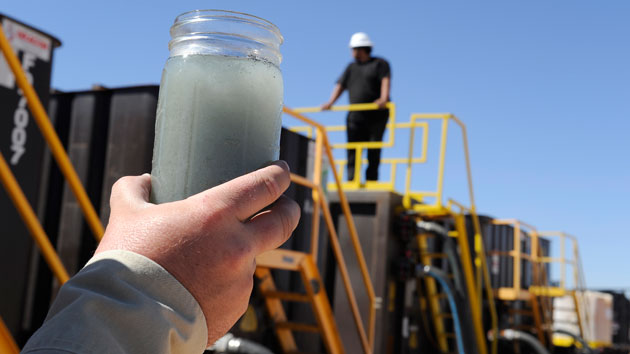 The potential impact of waste from oil and gas drilling, including hydraulic fracturing, on drinking water has been an issue in Texas, Wyoming and, with great urgency, in California this month. Here, a jar of fracking water waste is displayed at a recycling site in Midland, Texas.Pat Sullivan/AP

This story was originally published on ProPublica.

California officials have ordered an emergency shut-down of 11 oil and gas waste injection sites and a review more than 100 others in the state’s drought-wracked Central Valley out of fear that companies may have been pumping fracking fluids and other toxic waste into drinking water aquifers there.

The state’s Division of Oil and Gas and Geothermal Resources on July 7 issued cease and desist orders to seven energy companies warning that they may be injecting their waste into aquifers that could be a source of drinking water, and stating that their waste disposal “poses danger to life, health, property, and natural resources.” The orders were first reported by the Bakersfield Californian, and the state has confirmed with ProPublica that its investigation is expanding to look at additional wells.

The action comes as California’s agriculture industry copes with a drought crisis that has emptied reservoirs and cost the state $2.2 billion this year alone. The lack of water has forced farmers across the state to supplement their water supply from underground aquifers, according to a study released this week by the University of California Davis.

The problem is that at least 100 of the state’s aquifers were presumed to be useless for drinking and farming because the water was either of poor quality, or too deep underground to easily access. Years ago, the state exempted them from environmental protection and allowed the oil and gas industry to intentionally pollute them. But not all aquifers are exempted, and the system amounts to a patchwork of protected and unprotected water resources deep underground. Now, according to the cease and desist orders issued by the state, it appears that at least seven injection wells are likely pumping waste into fresh water aquifers protected by the law, and not other aquifers sacrificed by the state long ago.

“The aquifers in question with respect to the orders that have been issued are not exempt,” said Ed Wilson, a spokesperson for the California Department of Conservation in an email.

A 2012 ProPublica investigation of more than 700,000 injection wells across the country found that wells were often poorly regulated and experienced high rates of failure, outcomes that were likely polluting underground water supplies that are supposed to be protected by federal law. That investigation also disclosed a little-known program overseen by the US Environmental Protection Agency that exempted more than 1,000 other drinking water aquifers from any sort of pollution protection at all, many of them in California.

Those are the aquifers at issue today. The exempted aquifers, according to documents the state filed with the US EPA in 1981 and obtained by ProPublica, were poorly defined and ambiguously outlined. They were often identified by hand-drawn lines on a map, making it difficult to know today exactly which bodies of water were supposed to be protected, and by which aspects of the governing laws. Those exemptions and documents were signed by California Gov. Jerry Brown, who also was governor in 1981.

State officials emphasized to ProPublica that they will now order water testing and monitoring at the injection well sites in question. To date, they said, they have not yet found any of the more regulated aquifers to have been contaminated.

“We do not have any direct evidence any drinking water has been affected,” wrote Steve Bohlen, the state oil and gas supervisor, in a statement to ProPublica.

Bohlen said his office was acting “out of an abundance of caution,” and a spokesperson said that the state became aware of the problems through a review of facilities it was conducting according to California’s fracking law passed late last year, which required the state to study fracking impacts and adopt regulations to address its risks, presumably including underground disposal.

California officials have long been under fire for their injection well practices, a waste disposal program that the state runs according to federal law and under a sort of license—called “primacy”—given to it by the EPA.

For one, experts say that aquifers the states and the EPA once thought would never be needed may soon become important sources of water as the climate changes and technology reduces the cost of pumping it from deep underground and treating it for consumption. Indeed, towns in Wyoming and Texas—two states also suffering long-term droughts—are pumping, treating, then delivering drinking water to taps from aquifers which would be considered unusable under California state regulations governing the oil and gas industry.

In June 2011, the EPA conducted a review of other aspects of California’s injection well program and found enforcement, testing and oversight problems so significant that the agency demanded California improve its regulations and warned that the state’s authority could be revoked.

Among the issues, California and the federal government disagree about what type of water is worth protecting in the first place, with California law only protecting a fraction of the waters that the federal Safe Drinking Water Act requires.

The EPA’s report, commissioned from outside consultants, also said that California regulators routinely failed to adequately examine the geology around an injection well to ensure that fluids pumped into it would not leak underground and contaminate drinking water aquifers. The report found that state inspectors often allowed injection at pressures that exceeded the capabilities of the wells and thus risked cracking the surrounding rock and spreading contaminants. Several accidents in recent years in California involved injected waste or injected steam leaking back out of abandoned wells, or blowing out of the ground and creating sinkholes, including one 2011 incident that killed an oil worker.

The exemptions and other failings, said Damon Nagami, a senior attorney with the Natural Resources Defense Council in an email, are “especially disturbing” in a state that has been keenly aware of severe water constraints for more than a century and is now suffering from a crippling drought. “Our drinking water sources must be protected and preserved for the precious resources they are, not sacrificed as a garbage dump for the oil and gas industry.”

Still, three years after the EPA’s report, California has not yet completed its review of its underground injection program, according to state officials. The scrutiny of the wells surrounding Bakersfield may be the start.