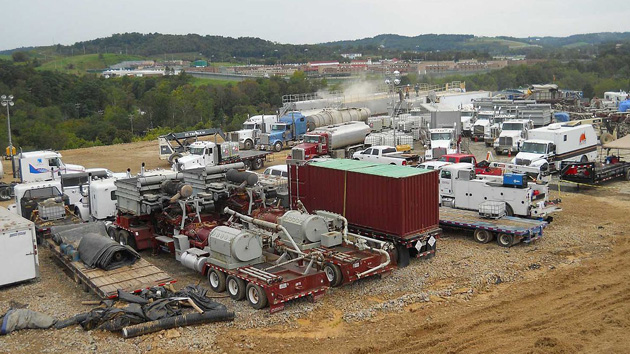 On the political right, it’s pretty popular these days to claim that the left exaggerates scientific worries about hydraulic fracturing, or “fracking.” In a recent National Review article, for instance, a Hoover Institution researcher complains that 53 percent of Democrats in California support a fracking ban “despite the existence of little if any credible scientific evidence of fracking’s feared harms and overwhelming scientific evidence of its environmental benefits, including substantial reductions in both local and global pollutants.”

Three or four years ago, a statement like that may have seemed defensible. The chief environmental concern about fracking at that time involved the contamination of drinking water through the fracking process—blasting water, sand, and chemicals underground in vast quantities and at extreme pressures to force open shale layers deep beneath the Earth, and release natural gas. But the science was still pretty ambiguous, and a great deal turned on how “fracking” was defined. The entire mega-process of “unconventional” gas drilling had clearly caused instances of groundwater contamination, due to spills and leaks from improperly cased wells. But technically, “fracking” only refers to the water and chemical blast, not the drilling, the disposal of waste, or the huge industrial operations that accompany it all.

How things have changed. Nowadays, explains Cornell University engineering professor Anthony Ingraffea on the latest installment of the Inquiring Minds podcast (stream above), the scientific argument against fracking and unconventional gas drilling is more extensive. It involves not simply groundwater contamination, but also at least two other major problems: earthquake generation and the accidental emissions of methane, a potent greenhouse gas. 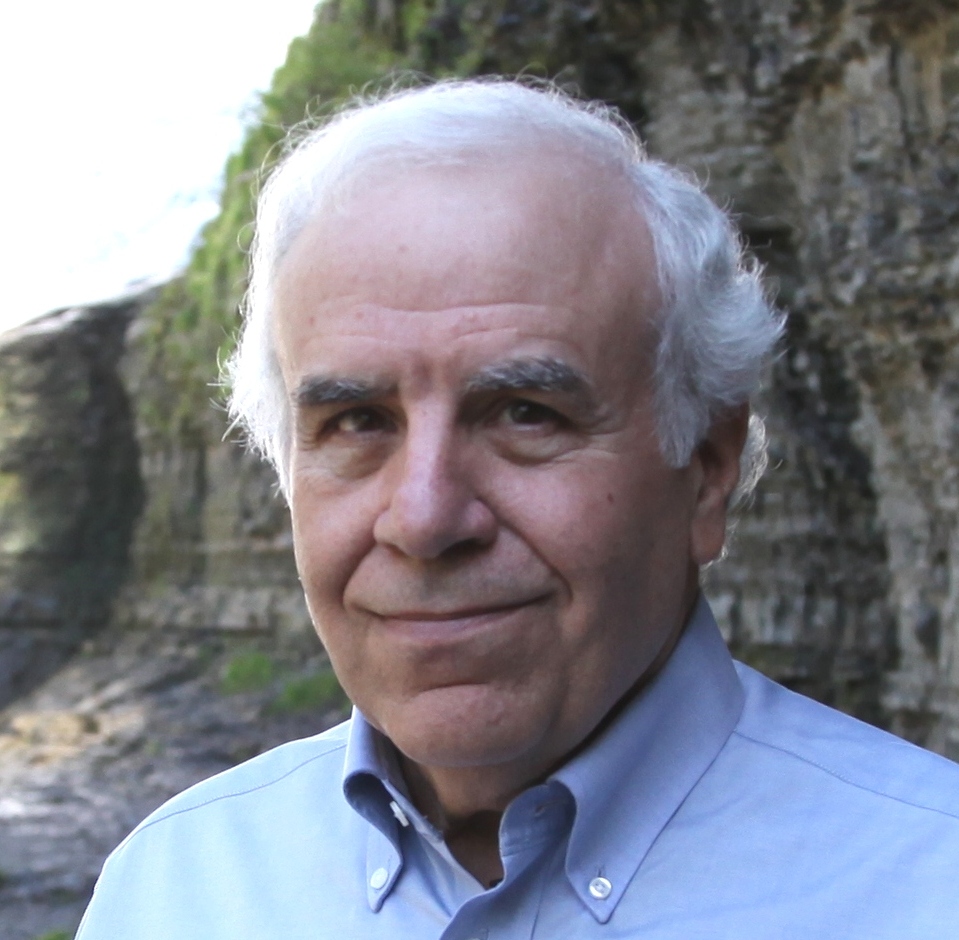 On the show, Ingraffea laid out the science on these issues—and it is certainly not something a reasonable person can ignore. Take earthquakes, for instance. According to Ingraffea, “there is now, in my opinion, scientific consensus that human-induced seismicity does occur” as a result of a particular aspect of unconventional gas drilling (namely, disposing of chemically laden “flowback water” in underground wastewater injection wells).

Ingraffea isn’t the likeliest scientific foe of fracking. His past research has been funded by corporations and industry interests including Schlumberger, the Gas Research Institute, General Dynamics, and Northrop Grumman. His original doctoral work, in the 1970s, involved the study of “rock fracture mechanics”—in other words, how cracks in rock form and propagate, a body of knowledge that is crucial to extractive industries like oil and gas. “I spent 20, 25 years working with the oil and gas industry…helping them to figure out how best to get oil and gas out of rock,” Ingraffea explains.

But he has since become an outspoken critic of unconventional gas development. He recently appeared in the HBO film Gasland II, and was recognized in 2011 by Time (alongside actor Mark Ruffalo and his Cornell colleague Robert Howarth) for his work highlighting the environmental risks of shale gas development.

So what happened? In a word: Science. On Inquiring Minds, Ingraffea laid out the developing science on earthquakes and methane emissions as they relate to unconventional gas development—and even if you don’t fully agree with everything he said, you still will find it unnerving. Let’s take these topics in turn:

Fracking fluid is blasted underground at “pressures approaching what you would get if you put, say, 10 SUVs on your fingertip,” says Ingraffea.

Fracking and Earthquakes. Somewhat surprisingly, the earthquake issue may actually be the least contentious scientific topic in the fracking debate. As Mother Jones has extensively reported, it now seems clear that wastewater injection—the underground storing of the chemical-laced water that comes back out of wells after fracking—can contribute to seismic activity. In fact, in a study published just last month in Science, researchers suggest that a dramatic increase in recent seismic activity in Oklahoma—including a 5.7 magnitude earthquake in 2011—is partly linked to the proliferation of wastewater disposal wells.

Granted, it may seem hard to understand (at least if you’re a non-geologist) how underground disposal wells can cause an earthquake. Let Ingraffea explain: “We’ve mobilized pre-existing, stable faults,” he says. Underground water from waste disposal “lubricates those faults and changes the pressure on them.” Naturally, the waste injection wells at issue are the ones that are closest to faults. Here’s a visualization:

As for the fracking process itself? That, too, can cause earthquakes, Ingraffea says, although earthquakes related to fracking (as opposed to injection wells) have been smaller (“so far,” as Ingraffea puts it). When you think about what we’re doing to the Earth, maybe that’s not so surprising. Fracking water, after all, is blasted underground at “pressures approaching what you would get if you put, say, 10 SUVs on your fingertip,” says Ingraffea.

Fracking and Fugitive Methane Emissions. Perhaps we can manage the earthquake issue. Certainly, it would help to stop injecting wastewater near faults. “That would be a design objective, yes,” deadpans Ingraffea. (It happens, he contends, because of a lack of EPA regulation.)

But there’s a potentially even graver issue—fugitive methane emissions from shale gas operations. This is the topic on which Ingraffea made his name in the fracking debate, and it’s probably the most momentous one of all.

In 2011, Ingraffea and two other Cornell researchers published a highly discussed scientific study in the journal Climatic Change, arguing that between 3.6 and 7.9 percent of methane gas from shale drilling operations actually escapes into the atmosphere, where it contributes to global warming. If true, then considering the unique atmospheric potency of methane—”methane is about 80 to 90 times…more potent as a greenhouse gas than carbon dioxide” over a two-to-three-decade time period, says Ingraffea—the implications could be dramatic. Natural gas could swing from being a net climate benefit (because it burns cleaner than oil or coal) to a climate harm, because of all the escaping methane. 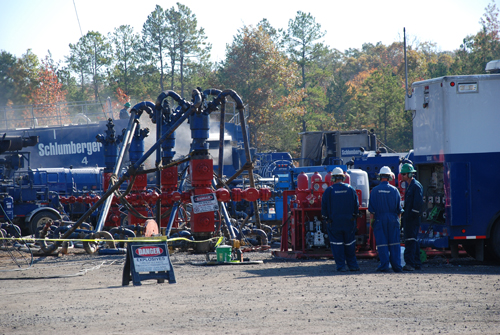 Four Fayetteville shale well heads in Arkansas. Critics like Ingraffea say significant amounts of fugitive methane gas are escaping from fracking operations around the country (though not necessarily the one above). Bill Cunningham, US Geological Survey.

Granted, it all depends on the leak rate from natural gas operations, across all the myriad stages of the process, from the initial release of the gas from the Earth all the way through to its transportation. And that’s where the debate lies. “Every single measurement has concluded that the percentage of methane leaking into the atmosphere from oil and gas operations is far greater than two and a half percent,” says Ingraffea. “I think the best estimate right now is somewhere around 5 percent”—an amount, he says, that would be more than big enough to doom the idea of natural gas as a “bridge fuel” to a clean energy future.

Ingraffea isn’t the only researcher suggesting that methane leakage is troublingly high. In a 2013 study published in the prestigious Proceedings of the National Academy of Sciences, a team of researchers from both US universities and national labs found that the EPA is currently underestimating methane emissions from the energy industry (including both conventional and shale gas drilling). However, in another paper in Science earlier this year (covered here by Mother Jones), researchers again faulted EPA’s methane measurements, but nonetheless concluded that natural gas can still contribute to a cleaner future if methane emissions are policed adequately. (The UN’s Intergovernmental Panel on Climate Change has reached a similar conclusion.)

The Bottom Line? It is certainly not the case that every expert agrees with Ingraffea. For instance, both publicly and in print, Ingraffea has regularly debated Terry Engelder, a professor of geosciences at Penn State University, who argues that the benefits of shale gas development still outweigh the risks.

Engelder certainly doesn’t deny the problem of fugitive methane emissions. Rather, his view is that “by fixing leaks, green completions and what not, that can take care of the methane leaking into the atmosphere.” (“Green completions” refers to a new EPA rule that will require natural gas operators to capture volatile organic compounds on site rather than allowing them to escape to the atmosphere—a process, the EPA says, that would also “significantly reduce” methane emissions.)

With mounting scientific evidence behind him, then, Ingraffea makes a pretty strong case today that natural gas is a wolf in sheep’s clothing. The methane issue may not be settled fully, but it is undoubtedly grave—and certainly not something that we can afford to be wrong about. To still support President Obama’s “all of the above” approach to energy (which favors renewables, but also natural gas), you have to assume we can mitigate the methane leakage problem somehow. And you shouldn’t assume that without first listening, hard, to Ingraffea’s warning. As he concludes the Inquiring Minds interview:

For those who say we can regulate our way around this, just give us time and we’ll fix the problems—I’m sorry. We’ve had 100 years of commercial oil and gas development at very large quantities, around the world. Time is over. We’ve damaged the atmosphere too much, and it would take too long, it would take decades and billions of dollars, to begin to fix the problems that we know have existed for decades. And by then, it will be too late.

To listen to the full Inquiring Minds interview with Anthony Ingraffea, you can stream below:

This episode of Inquiring Minds, a podcast hosted by neuroscientist and musician Indre Viskontas and best-selling author Chris Mooney, also features a discussion of the science on racial prejudice and guns, and, in the wake of the suicide of the beloved actor Robin Williams, the science of depression.