Along with plain white refined sugar, most hip coffee shops now offer “raw” sugar. I usually go with raw: The golden crystals and brown paper packets somehow make me think it’s more wholesome than the conventional white stuff, which, as highlighted in a previous Mother Jones investigation, many scientists now believe is far worse for you than the industry would have us think.

Sugar in the Raw, a leading raw sugar brand, suggests on its Frequently Asked Questions page that its product is indeed more wholesome. “White sugar is obtained by refining the sugarcane crystals to remove the molasses (and with that, trace nutrients),” it states. “Some nutritionists believe that the small amount of micronutrients retained in Sugar In The Raw® provides advantages over refined white sugar.” Raw sugar is also more expensive: On Amazon, a four-pound bag of Sugar in the Raw retails for $12.99, versus $3.25 for regular.

So is the raw stuff really more virtuous? Sugar in the Raw could not be reached for comment, but a spokeswoman for the Wholesome Sweeteners brand of raw sugar explained to me that, like refined sugar, raw—technically called Turbinado—sugar comes from sugarcane (refined sugar can also be derived from beets). The main difference between the two is in the boiling of the cane juice: The juice for refined sugar is boiled several times to remove all the molasses, whereas Turbinado sugar is boiled only once.

The residual molasses gives Turbinado sugar “some flavor and texture other than just sweetness,” says Katherine Zeratski, a registered dietitian with Mayo Clinic. But it doesn’t provide any significant nutrition. Refined and raw sugar are “calorically identical,” Zeratski notes. And while Turbinado sugar does contain calcium, iron, and potassium, it contains them in trace amounts. We used the USDA’s National Nutrient Database to calculate a few comparisons: 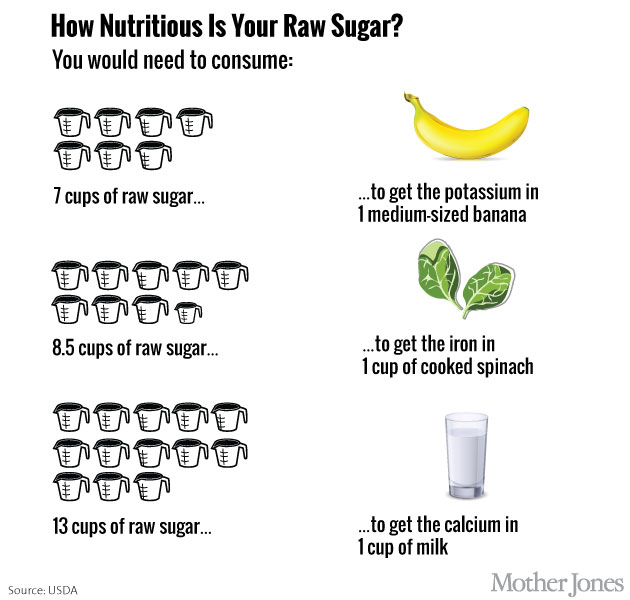 While one 2012 study found that molasses from sugar cane acted as an antioxidant in laboratory cell cultures, Kimber Stanhope, a University of California-Davis microbiologist who focuses on sugars, said she was unable to find any research suggesting the same effect for cells in the body. She emails: “Given the lack of scientific evidence that consumption of molasses has any health benefits in humans, and the fact that the molasses content of Turbinado sugar is very low, it is certainly a stretch to suggest that Turbinado sugar is healthier than refined sugar.”

There goes my virtuous latte.