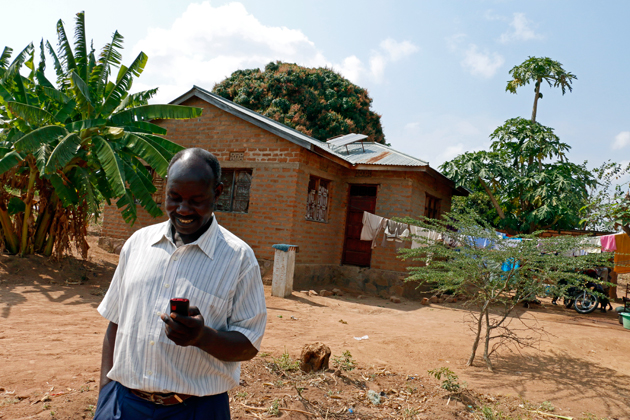 Ruinda Njaba uses his solar panels (visible on the roof behind him) to power up villagers’ cellphones. He charges them for 12 cents apiece. Tim McDonnell/Climate Desk

Lusela Murandika just wants to be able to watch the evening news.

The 76-year-old farmer lives in Kanyala village in northern Tanzania, 60 miles from the nearest town that’s connected to the electric grid. For years, he’s powered a tiny TV set in the dim sitting room of his concrete house here with a diesel generator, spending roughly $10 each month on fuel—money that could otherwise buy more than 20 pounds of rice in a country where the per capita GDP is $695.

Earlier this year, on the advice of friends, he invested $400 in a small, 80-watt solar system. After charging all day under the East African sun, it can run his TV for two hours. The system was a pain in the neck to install, he says, and the battery is unreliable, but it’s still an improvement over the generator. And here, as in most of rural Africa, there aren’t many options.

“It’s a joke to think we’ll all be connected to the grid,” he says with a rueful grin. 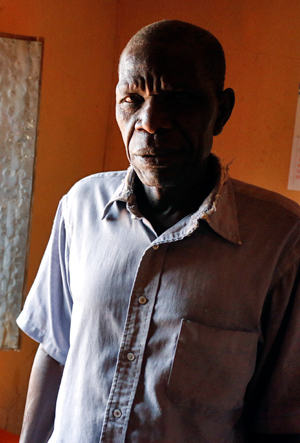 Some joke. Nineteen percent of the global population lives without access to electricity, according to the International Energy Agency. In Africa, that number is 58 percent. The vast majority of those without power are in rural areas. In Tanzania specifically, 86 percent of the population has no electricity, a fact that was illustrated when the lights cut out at President Obama’s hotel in Dar es Salaam during a visit he made there last year to dedicate $7 billion for energy access improvements across the continent.

Tanzanians still get 76 percent of their energy—mostly for heating and cooking—from charcoal, wood, and other biomass. So there’s more at stake than turning on the lights: Indoor air pollution kills more than 4 million people every year, more than AIDS and malaria combined. Increasing access to clean energy is literally a matter of life or death.

In Tanzania, the population is predominantly rural and scattered in small villages across vast reaches of terrain, while the state-owned utility is chronically cash-strapped and urban-focused. So Murandika’s pessimism about the grid is almost certainly justified. But just as the mobile phone revolution in Africa dramatically reduced the need for telephone landlines, solar power is now leapfrogging the electric grid. Like Murandika, thousands of rural Africans are turning to solar as the solution, in a clean-energy boom that development experts say could become a catalyst for widespread economic empowerment.

These aren’t the oceanic fields of solar panels some German entrepreneurs have proposed to build in the Sahara, nor the grid-connected rooftop systems that power entire American homes. Instead, these are small kits that come complete with the necessary panels, wiring, power converters, and batteries to power a few lightbulbs, a small appliance, or a cellphone charger. 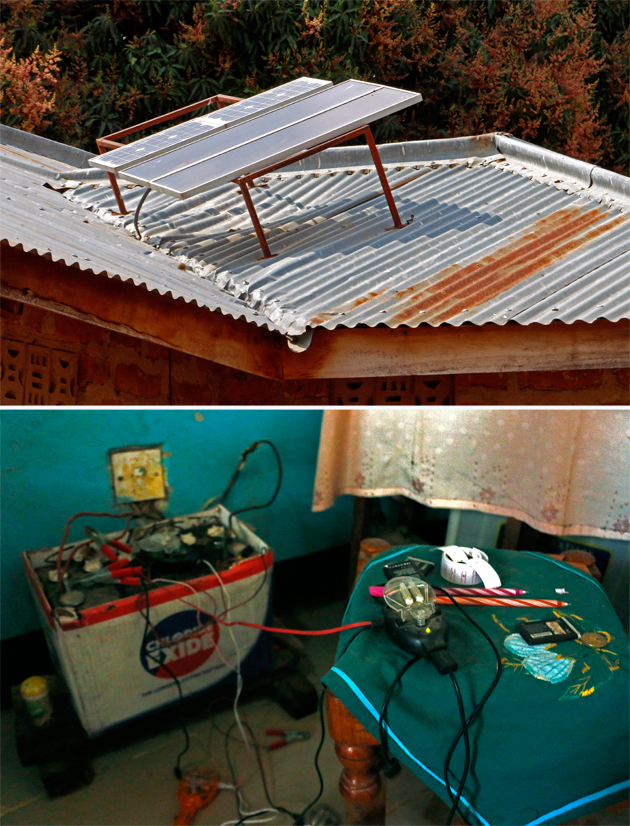 But if the device is small, the potential is huge: The IEA estimates that off-grid systems like this will account for 20 percent of new electricity needed by 2030, with solar the most important source of that. In other words, small-scale solar is the key to bringing light into disconnected rural areas.

“This is a challenge that is imminently resolvable,” said Shari Berenbach, president of the US African Development Foundation, a federal agency that supports African entrepreneurs. Technological improvements over the last several years have brought costs of solar down to a point where panels are increasingly being snapped up by rural people desperate for basic household lighting, she explained.

“It really improves people’s quality of life,” said Berenbach. “You can deliver babies by that light. Kids can study.”

So just how much of a boom are we talking about here? Reliable data is hard to find, but a 2013 World Bank report found that since 2009, sales of small solar lighting units have nearly doubled each year across the continent, rising to 4.4 million units sold in 2012. A study conducted last year by the German government found that between 2005 and 2012, Tanzania increased its solar capacity 4,900 percent from 100 kilowatts—about as much as 12 solar-equipped homes in the United States—to over five megawatts. Granted, that doesn’t compare to the jaw-dropping 21,000 percent increase in solar consumption over that same time period in the US, but it’s quite impressive given the country’s low overall rate of electrification. 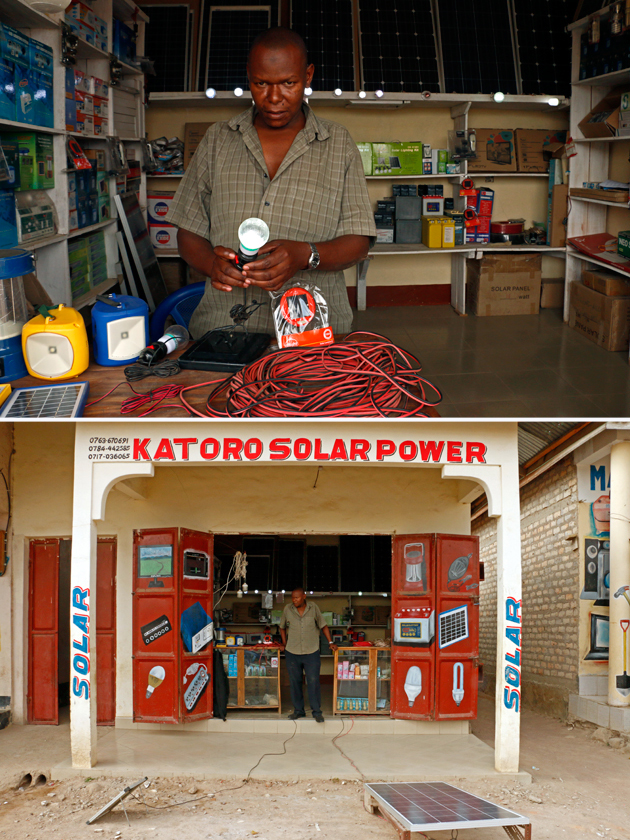 It’s more impressive still when you consider the minuscule amount of capital that has gone into African clean tech relative to the developed world. According to the latest analysis from Bloomberg New Energy Finance, all of Africa and the Middle East combined attracted just $9 billion in renewable energy investment in 2013—that’s just 4 percent of the global total, compared to 26 percent for China and 17 percent for the United States. But again, the story isn’t the raw numbers, but the massive growth: In 2011, when China’s clean-tech investment was comparable to what it is now, Africa and the Middle East’s combined total was at just a third of today’s levels. 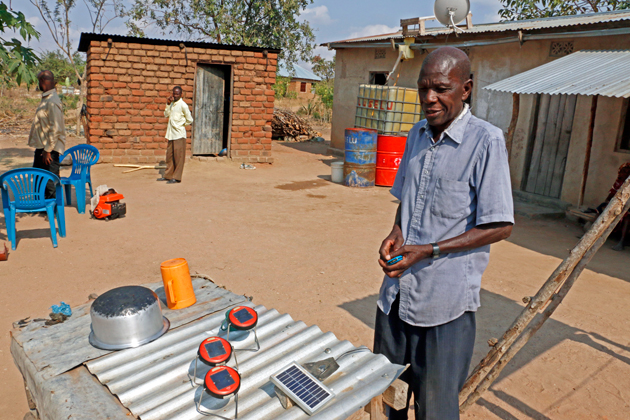 Lusela Murandika is happy to have made the jump from diesel generator to solar. The panel that powers his TV is on the roof behind him, behind the satellite dish. Tim McDonnell/Climate Desk

The boom isn’t just turning on the lights, but opening up new economic opportunities. In the midsize Tanzanian town of Katoro, solar shopkeepers like Edward Buta say business is booming. Buta’s store offers an array of products—from tiny solar flashlights to larger rooftop panel systems—for sale amidst chickens, motorcycle parts, textiles, pineapples, and the other more traditional products. Most of his customers come from villages on the outskirts of town, he says.

“There’s very good business,” he says. Just within the last year, “people have understood the benefits of solar, and now they come buying.”

Ruinda Njaba understood those benefits early. The schoolteacher lives in Sima village just down the road from Kanyala. He bought his first solar system in 2008. He uses it mainly for lighting, but he has recently started up a side business charging 12 cents for locals to power up their mobile phones. I explained to him that people in the US often get solar for its environmental benefits, and I asked if that had anything to do with his decision.

He laughed. It’s much simpler than that, he said. “I just wanted electricity.”

This story was produced with the support of the European Journalism Centre.