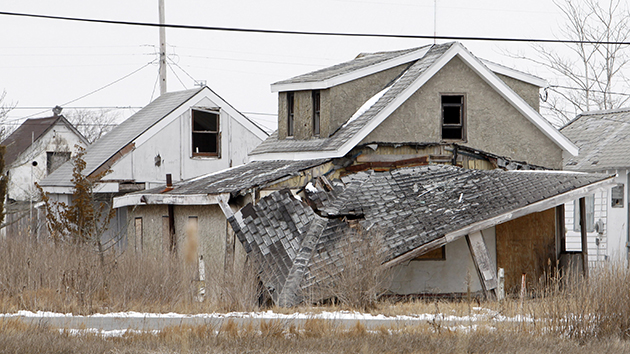 That could become an increasingly common story, according to the largest-ever survey of how insurance companies are dealing with climate change, released today. Global warming is increasing the risk of damage to lives and property from natural disasters beyond what many insurers are willing to shoulder. And most insurance companies aren’t taking adequate steps to change that trend, the survey found. That’s a problem even if you don’t live by the coast: When private insurers back out, the government is left to pick up much of the damage costs; already, the federal flood insurance program is one of the nation’s largest fiscal liabilities.

Ceres, an environmental nonprofit, evaluated the climate risk management policies of 330 large insurance companies operating in the United States. The results are worrying. Only nine companies, 3 percent of the total, earned the highest ranking.

“As a regulator, it’s very bad to see markets being abandoned because of the threat that exists.”

The insurers that scored highly on the survey (including several of the world’s biggest, such as Munich Re, Swiss Re, and Prudential) were those that have adopted a broad range of climate-conscious products and services, such as rate pricing plans that account for potential climate impacts like storms and fires. Some insurers are also investing in high-end climate modeling software to better understand where their risks really are. Others offer environmentally friendly plans like mileage-based car insurance and encourage their customers to rebuild damaged homes using green technologies. And some insurance companies are making significant efforts to monitor and reduce their own carbon footprint.

However, the report finds that one major way insurance companies are adjusting to climate change is by not insuring properties that are threatened by it, said Washington State Insurance Commissioner Mike Kreidler, a lead author of the report.

“As a regulator, it’s very bad to see markets being abandoned because of the threat that exists,” he said.

Certainly the threat is real. Globally, average annual weather-related losses have increased more than tenfold in the last several decades, from $10 billion per year in the period 1974-1983 to $131 billion in 2004-2013, according to the report. The insurance industry is not keeping pace: The proportion of those damages that are insured is steadily declining: 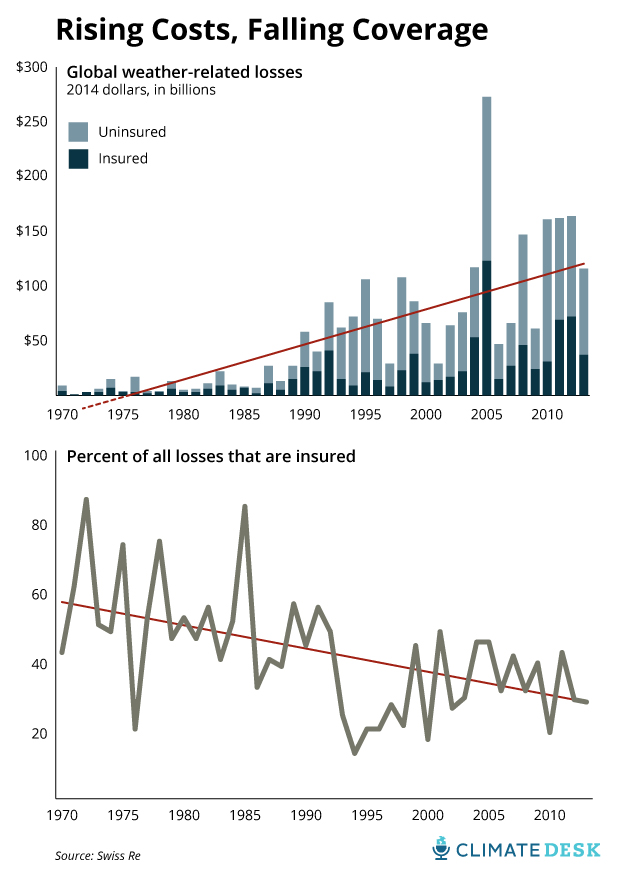 Insurance companies are being squeezed by the dual forces of global warming and urbanization (the latter is especially a problem when it comes to wildfires), so that the only way to stay profitable in vulnerable areas is to push rates much higher than they currently are, Munich Re America CEO Tony Kuczinski said in a press conference call. The easier option, and the one more frequently chosen, is to simply pull out of risky areas altogether.

“The view of the industry is that there is not risk-adequate pricing in those areas, and that’s why the government is the primary insurer there,” he said. “If rates were allowed to move in a direction that’s more accurate, it would encourage behavior change.”

In other words, one way to limit climate-related losses is by using market forces (i.e., sky-high insurance premiums) to encourage people not to build in places that are likely to be flooded or burned. Government rates, which are set to catch homeowners who fall through the cracks, are generally too low to spur that kind of change.

Experts say that if insurance companies can find a way to remain profitable without abandoning key markets, they will have a significant role to play in helping property owners prepare for climate change. As the industry most finely-attuned to analyzing risk, it’s essential for insurers to take a more proactive role in promoting climate adaptation in building codes and other regulations, says Ceres president Mindy Lubber.

“When they act and change, the entire economic sector listens and responds,” she said.