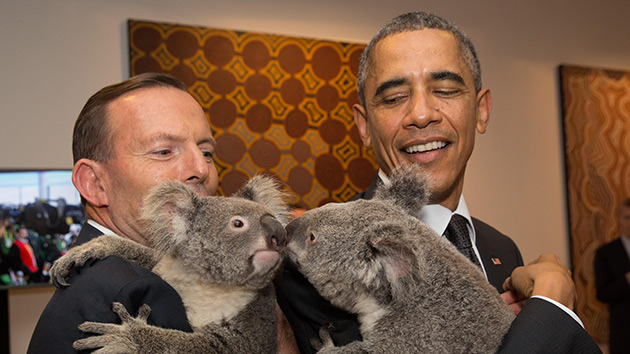 The Prime Minister of Australia is called Abbott. His deputy, Bishop. And together they head a group of ministers who are running an anti-climate campaign with an almost religious fervor.

In a report issued this week by Climate Action Network Europe and Germanwatch, Australia was ranked as the “worst industrial country in the world” on climate action—and second-worst among all countries, above only Saudi Arabia. Australia’s open hostility toward climate action began in earnest last year, when the right-wing Liberal Party led by Prime Minister Tony Abbott took power in a landslide victory. So far, Abbott’s team has repealed carbon pricing laws, scrapped or eroded funding for government agencies that deal with climate policy, and spoken out against the UN’s international Green Climate Fund, which is designed to help poorer countries fight the effects of global warming.

Now, at least one of those things has changed. This week, deputy leader of the Liberal Party Julie Bishop*—who is also the country’s minister for foreign affairs—finally caved to international pressure and announced a $200 million (AUD) commitment to the Green Climate Fund. That’s about $166 million (US). “Our pledge to the Green Climate Fund will facilitate private sector-led economic growth in our region,” she said this week at the UN climate talks in Lima, Peru. Bishop added that the plan would allow Australia to “focus on investment, infrastructure, energy, forestry and emissions reductions.” Australia joins 21 other nations, including the United States, which last month announced a contribution of $3 billion.

The fund has become an important focal point of international climate negotiations because poorer countries typically get the rough end of global warming: Not only are they more likely to feel the brunt of its impacts—such as rising sea levels and increased extreme weather—they also don’t have enough money to face the problem. Meanwhile, rich countries are largely to blame for the crisis. The fund tries to remedy that imbalance.

“Our pledge to the Green Climate Fund will facilitate private sector-led economic growth in our region,” said Julie Bishop.

Australia’s announcement is a policy back-flip. Asked about the UN fund before a climate meeting in Warsaw last year, Abbott said, “We’re not going to be making any contributions to that.” He’s also called the fund a “Bob Brown bank.” Let me explain that one: It’s an attack on the former leader of Australia’s left-wing Greens Party, whom Abbott loves to caricature as the sort of bleeding-heart, tree-hugging socialist who only knows how to wreck an economy. To American ears, it’s basically like the Republican trope around Obama’s job-killing “war on coal.”

Australia faced strong criticism from European nations after its negotiators engaged in what one European official described as “trench warfare” in an attempt to prevent the fund’s inclusion in a G20 communiqué following a G20 summit in Brisbane last month. Australia also refused to join other world leaders at a conference in Berlin last month that was aimed at raising $10 billion for the fund.

And wow, did Abbott sound utterly miserable when he was asked about the government’s dramatic reversal in the face of international pressure. (He’s quite transparent when he doesn’t like something.) The video of Abbott reacting to the funding announcement is telling.

Abbott now admits that he did make “various comments some time ago” criticizing the fund, but he says that “we’ve seen things develop over the last few months.” Indeed, a lot has happened over the last few months that might have helped change Abbott’s mind. The Canadians—with whom he’s enjoyed a kind of anti-climate bromance—recently agreed to cough up cash for the fund. Last month, Abbott was humiliated at his very own party—the G20 meeting in Brisbane—when world leaders ganged up on him in the dispute over the communiqué. And then there was the news that China, Australia’s massive trading partner, had inked a landmark emissions reduction deal with Australia’s most important ally, the United States.

Now, Abbott’s message has grudgingly changed: “I think it’s now fair and reasonable for the government to make a modest, prudent and proportionate commitment to this climate mitigation fund: I think that is something that a sensible government does,” he said. “That money will be strictly invested in practical projects in our region.”

The announcement was praised, hesitantly, by environmental groups. There was, after all, a catch. The money will be drawn from Australia’s existing international aid budget—a budget has already been cut by $7 billion over the next five years.

Climate success or otherwise, these developments appear to be a fascinating continuation of the “climate change as political kryptonite” narrative that has dominated Australian politics for years. As Lenore Taylor, political editor for the Guardian Australia, once told me, climate change is the “killing fields” of Aussie politics. And now it appears the guns are out and loaded once more—dividing the cabinet and leaving the leader out on a limb.

Climate change is the “killing fields” of Aussie politics.

Bishop was, at first, reportedly blocked by the prime minister’s office from even traveling to Peru for the UN meeting—Australia has recently spurned climate meetings. But Bishop is perhaps the most popular minister in an increasingly unpopular government, and she took the disagreement to the nation’s cabinet, which overruled the boss. Then, Australia’s political press was laced with anonymous sources suggesting that Bishop was furious—”went bananas,” according to one—when she learned she would be not be traveling alone to represent Australia. Instead, Bishop would be accompanied by another minister (described in the Australian press as a “chaperone“), reportedly to make sure she didn’t get swept up in the momentum to get a global emissions deal done—something that Abbott has desperately tried to avoid. (Bishop has denied she was angry).

Discord! Strife! Media intrigue! It would all seem so petty if it weren’t part of a familiar pattern, one that’s deeply foreign to American politics: Climate policy has hung over Australia’s politicians like a dark storm cloud since at least 2006, and it has been instrumental in the downfall of multiple political leaders. Here’s a short summary:

Signs that Bishop may be using climate change to outflank her leader must be worrying to Abbott. As one political commentator put it: “smaller slights than this have proved the defining moment in the descent into division of governments past. A bushfire can begin with just one match.”

Correction: An earlier version of this story referred incorrectly to Julie Bishop as Australia’s deputy prime minister. She is in fact the deputy leader of the Liberal Party.