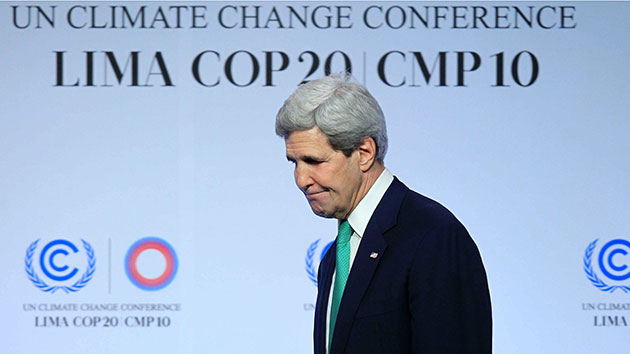 Climate negotiators from nearly 200 countries are on their way home from Lima, Peru, after a series of last-minute compromises produced an agreement that, for the first time, calls on all countries to develop plans to limit their greenhouse gas emissions.

As the two weeks of global warming talks drew to a close, familiar fault lines emerged between wealthy countries—which are disproportionately responsible for causing climate change—and developing countries, which will be disproportionately impacted by it. In the end, both sides made sacrifices. Developing nations failed to convince the United States other economic powerhouses to commit cash to fund climate adaptation efforts around the world. And the US lost a battle over a one-word change that made guidelines for countries’ climate commitments optional instead of mandatory. As a result, the agreement came out weaker than climate hawks had hoped for, because countries get plenty of wiggle room to potentially scale back their promises.

“I would say that whereas at the end of last week, the draft agreement was close to unambiguously positive, over the weekend it did get watered down,” said Harvard environmental economist Robert Stavins. (You can read his more detailed analysis here).

So what happens now? The Lima agreement is essentially a playbook for diplomacy in the run-up to next December’s major global warming talks in Paris, where countries will meet in an attempt to finalize the world’s first universal climate accord. Before that can happen, there’s still a whole lot of negotiating left on the table, at both the domestic and international levels.

First, every country is now supposed to come up with its plan for reducing greenhouse gas emissions, like the joint plan announced last month by the US and China. Guidelines for what those plans must include are pretty loose, but in most cases they’ll lay out an emissions reduction target, a timeline for reaching it, and a series of domestic policy measures to achieve it. The Lima agreement requires that the plans be more aggressive than a “business-as-usual” scenario.

The plans can also (but aren’t required to) include commitments for low-carbon economic development, pledges of financial assistance for developing countries, or really whatever else a country feels like sticking in there. Those plans are due to the UN climate committee no later than October 1.

Once every country has submitted its contribution, the UN will conduct an analysis of how far they go, collectively, toward slowing climate change. This will be like a report card grading the actual impact the Paris agreement is likely to have. Expect that by November.

At the same time, negotiators will be tinkering away on nearly 40 pages of draft text that will serve as an introduction to the patchwork of national contributions (see the “Annex” here). There are smaller meetings early in 2015—first in Bonn, Germany, and then in Geneva, Switzerland—where this will be the main task at hand. That document will be presented in May, then tweaked and (fingers crossed) finally approved in Paris.

Stay tuned over the next several months for commitments from key players like India, Russia, and Australia.