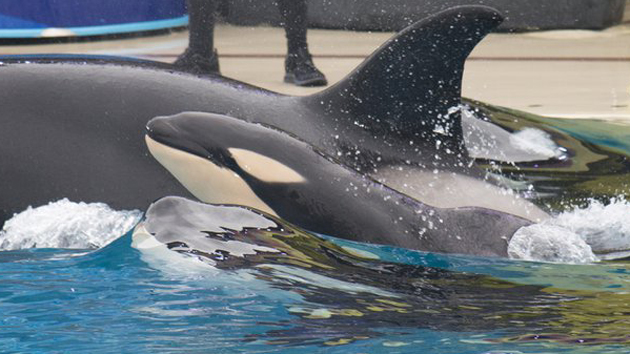 A baby killer whale born on December 2, 2014, swims in a tank at SeaWorld.Courtesy photo

SeaWorld Entertainment has had a rough year in the wake of Blackfish, the explosive 2013 documentary about its killer whales, most notably Tilikum, a 12,500-pound male who has fatally attacked two trainers. The film sparked protests at SeaWorld’s three marine parks and attendance has been steadily dropping. Kids have petitioned to cancel field trips, musicians like Willie Nelson have nixed concerts, and brands like Taco Bell and Southwest Airlines have cut ties with the company. Lawmakers in California, home to the flagship SeaWorld San Diego, even proposed banning orca captivity in the state. The company’s stock price has been sinking; in August, it fell nearly a third in one day.

In response, SeaWorld has launched a full-on PR counteroffensive. One of its main talking points is science: While slamming Blackfish as unscientific “propaganda,” the park asserts that its killer whales provide a rare opportunity to do crucial research. “We create a controlled setting for science that is impossible to replicate in the wild,” its website states. “Whales in SeaWorld’s care help science better understand and conserve wild killer whales.” It also notes that the park recently pledged to spend an additional $10 million on orca research.

That’s a drop in the bucket of SeaWorld’s total budget: Last year, 24 million people visited its 11 parks nationwide, bringing in $1.4 billion. Orcas are undeniably the main draw. SeaWorld trained the original Shamu and owns around half of the roughly 50 orcas living in captivity. Convincing the public that a SeaWorld ticket can help save wild Baby Shamus may be essential to keeping the company afloat.

While slamming Blackfish as unscientific “propaganda,” SeaWorld asserts that its killer whales provide a rare opportunity to do crucial research.

Yet independent orca researchers say these arguments don’t hold water. “If SeaWorld didn’t exist, would our understanding of wild killer whales be significantly reduced? I think the answer to that is no, it would not,” says a veteran marine-mammal researcher who works at the National Oceanic and Atmospheric Administration. “It’s a bit like having Walt Disney tell us about mouse biology,” says Ken Balcomb, founder of the Center for Whale Research and a pioneering orca researcher.

Despite their 24/7 access to killer whales, SeaWorld-affiliated researchers have published relatively few orca studies. Of the four dozen orca-related papers coauthored by SeaWorld-backed researchers over the past 40 years, half were published before 1990, and just seven since 2010. What’s more, at least one-third of these papers did not focus on captive whales, but wild populations ranging from Alaska to New Zealand.

Many of the papers cited on SeaWorld’s website were coauthored by researchers from the Hubbs-SeaWorld Research Institute, a San Diego nonprofit founded in 1963. SeaWorld provides around 10 percent of its roughly $5 million budget. In 2012 and 2013, Hubbs-SeaWorld published 26 papers on topics ranging from abalone genetics to polar bears’ hearing; none focused on orcas. SeaWorld also touts its SeaWorld & Busch Gardens Conservation Fund as evidence of its investment in killer-whale science and conservation. However, between 2004 and 2012 the fund spent no more than $550,000 on research focused on killer whales, according to an analysis by the nonprofit Whale and Dolphin Conservation.

Asked for examples of the company’s contributions to orca science, SeaWorld vice president of communications Fred Jacobs points to studies on underwater hearing and reproduction, research on dead orcas, and an article on orcas’ metabolism published in the online version of Marine Mammal Science last year. But Naomi Rose, a marine-mammal scientist at the Animal Welfare Institute who has studied wild orcas for more than two decades, says that paper doesn’t break new ground. “The issue isn’t that we don’t know how much fish they need to eat each day,” she says. “The issue is we’re leaving them with nothing to eat.” Her comments are echoed by other researchers, who say that SeaWorld hasn’t contributed much to our understanding of the main threats to wild orcas: overfishing, pollution, and climate change.

“It’s a bit like having Walt Disney tell us about mouse biology,” says Ken Balcomb, a pioneering orca researcher.

SeaWorld has put considerable resources behind one profitable area of scientific research. At the SeaWorld & Busch Gardens Reproductive Research Center in San Diego, scientists are developing “state-of-the-art reproductive technologies,” such as artificial insemination using cryopreserved whale sperm, to maintain the park’s stock of captive animals. SeaWorld points out that it hasn’t removed a killer whale from the oceans in more than 35 years. It has successfully bred 31 orcas in captivity since the mid-1980s. Many of these were fathered by the 33-year-old Tilikum, whose disturbing deterioration was depicted in Blackfish.

Todd Robeck, the center’s vice president of theriogenology—the study of how animals reproduce—argues that SeaWorld’s reproductive technology could help the species survive in case of “drastic population declines.” However, other researchers point out, captive orcas must be trained to donate or accept sperm; no one’s ever tried to impregnate a wild whale. Besides, says Rose, there isn’t compelling evidence that wild orcas are having trouble reproducing: “They breed fine. It’s surviving once they are born, in a degraded habitat, that is their problem.” Only the population of killer whales off British Columbia and Washington is considered endangered, in part due to the capture of its members by SeaWorld and other parks in the 1960s and 1970s.

In any case, say scientists and conservationists, the study of orcas in the wild is becoming less difficult and less invasive, making captive research less important. Advances in technology, from satellite tagging to biopsy darts, have made it much easier to get detailed data on wild marine mammals. A project headed by University of Washington biologist Samuel Wasser uses a trained dog to detect floating killer-whale feces. “Whale poop is a gold mine,” says team member Debbie Giles of the University of California-Davis. “The best part is this allows us to stay really far from the whales. We don’t have to go near them at all, and we can learn incredible amounts of information about them.”

SeaWorld’s Robeck says there’s another good reason to keep orcas on display: They’re “education ambassadors” that encourage “people to think more about the environment and what they can do to help preserve and protect it.” Yet Giles notes that SeaWorld has yet to do the research that could undergird this claim. Visitors may fall in love with the performers at Shamu Stadium, but will they take action to protect wild orcas? “The onus is on SeaWorld to prove it.”