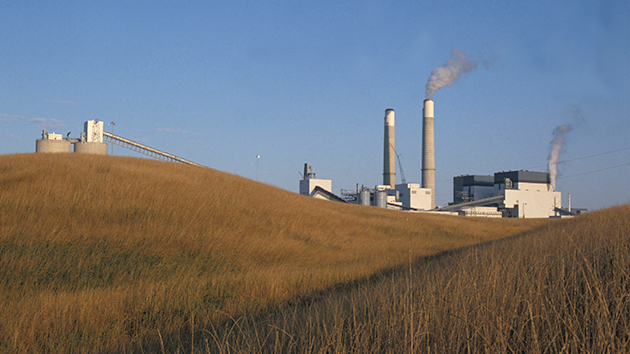 Obama's climate plan calls for power plants in Virginia like this to be closed or renovated.Ed Lallo/ZUMA

This week, representatives from the state-level agencies that manage electric grids met in Washington, DC, for a collective freak-out about President Barack Obama’s flagship climate policy. The Clean Power Plan, as it’s called, aims to slash the nation’s carbon footprint 30 percent by 2030. It would require every state to reduce the carbon “intensity” of its power sector—that is, how much greenhouse gas is emitted for every unit of electricity produced.

There’s a unique reduction target for every state, and a likewise diverse array of things for state regulators to hate: They argue the plan is a gross overreach of federal authority; that it will bankrupt utility companies, drive up monthly bills for ratepayers, and lead to power shortages; that states won’t be adequately credited for clean-energy steps they’ve already taken; and that the deadlines for compliance are just downright impossible to meet. And coal companies are justifiably worried that the plan could kill their business.

“They had the keys in their hand,” NRDC’s Haq said, “but instead they’re handing them over to the EPA.”

More than a dozen states (mostly coal-dependent states in the South, which could be hit hardest by the rules) are already raising hell in what’s shaping up to be the environmental version of state-level challenges to Obamacare. As our friend David Roberts at Grist highlighted this week, a number of states have joined a lawsuit challenging the EPA’s legal authority to regulate carbon dioxide emissions. And across the country in those states and others, bills are cropping up that could make it hard or impossible for individual states to meet their mandated carbon targets. The idea is effectively to stonewall the EPA and hope the regulations get killed in court.

The most recent battle is playing out this week in Virginia, where a state representative with ties to the coal industry wants to make it more difficult for the state’s Department of Environmental Quality to comply with the president’s climate goals.

First, a little background: The nation’s first anti-EPA bill came early last year in Kentucky, before the Clean Power Plan was even released. The proposed EPA rule would require Kentucky to cut its power-sector carbon emissions roughly 35 percent by 2030. That’s bad news for the coal industry, which supplies more than nine-tenths of the state’s power. So using a model bill developed by the conservative American Legislative Exchange Council (which has deep ties to the coal industry), Kentucky legislators passed a law that essentially prevents the state from complying with the Clean Power Plan. The new law bars the state from adopting any implementation plan that includes renewable energy or energy efficiency, or that encourages power plants to switch from coal to natural gas. With those restrictions, the EPA goal does indeed seem unreasonable; the state’s top climate official recently told Inside Climate News that he has no idea how to meet the EPA’s demands and stay within state law.

These days, rather than pushing bills that restrict a state’s options, ALEC has a new tactic of choice, says Aliya Haq, a Clean Power Plan specialist at the Natural Resources Defense Council. ALEC is now pushing bills that require a state’s compliance plan to be approved its legislature, which would open up more opportunities for pro-coal lobbying than if the process was confined to the state’s environmental agency. Pennsylvania and Arizona have already passed laws along these lines. But Haq says such bills are likely to face stiff opposition from governors who don’t want their administration’s plans micro-managed by legislators, and also from electric utility companies that likewise want to keep control over their own investment decisions.

Which brings us back to Virginia. About a month ago, state Sen. John Watkins (R) introduced a legislative-approval bill along the lines of the ALEC model. Over the next few weeks, the bill was watered down to give the legislature input on, but not veto power over, any plan proposed by Department of Environmental Quality. Environmentalists like NRDC’s Virginia statehouse watchdog Walton Shepherd were excited, because the revised bill would have kept politics—and potential influence by the state’s powerful coal lobby—out of the planning process.

“They were frothing at the mouth, but now this is what they’ve come up with,” Shepherd said last week. “It’s turned into something pretty toothless.”

But on Friday, after the Senate bill had moved on to the state House, the story changed. Delegate Israel O’Quinn (R) successfully reintroduced the legislative approval mandate, and the bill passed the House. O’Quinn, who represents a rural county in far southwestern Virginia on the border with Tennessee, received more campaign financing from the mining industry ($61,950) than from any other industry, according to the Institute on State Money in Politics. That included more than $30,000 from coal companies and their executives. O’Quinn did not return a request for comment.

The bill now returns to the Senate for a second round of wrangling. A spokesperson for Gov. Terry McAuliffe (D) declined to comment on whether the governor would sign the bill.

Cale Jaffe, Virginia director of the Southern Environmental Law Center, said he was disappointed by the reversal.

“The question for Virginia is: Are we going to put ourselves in a position to create jobs in a clean energy economy?” Jaffe said. “This amendment is obviously a distraction from that.”

Tying regulators’ hands makes little sense, Haq said, because it simply dooms a state to accept a plan designed by the EPA—if a state fails to supply an acceptable plan, the EPA can impose one of its own, which could be far more damaging than what the state could have devised. In other words, unless the Supreme Court says otherwise (pretty unlikely, given its lengthy history of ruling in favor of the EPA), state legislators shouldn’t plan to weasel their way out of the Clean Power Plan.

“They had the keys in their hand,” Haq said, “but instead they’re handing them over to the EPA.”